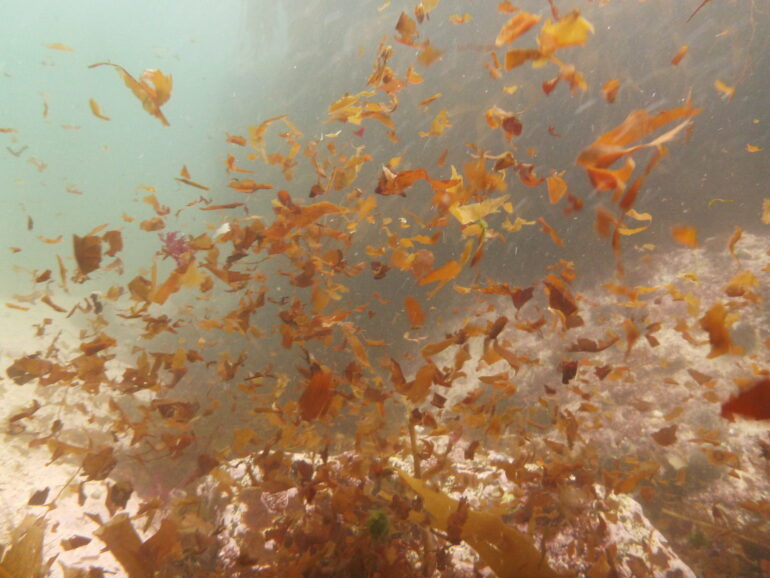 Kelp forms vast seaweed forests along temperate coastlines, which sequester large amounts of atmospheric carbon. But according to a study by Karen Filbee-Dexter at the University of Western Australia and the Institute of Marine Research and colleagues, published in the open-access journal PLOS Biology, warming oceans could reduce the capacity of kelp forests to trap carbon for long periods in deep ocean stores, exacerbating the effects of climate change.

Kelp carbon can feed other organisms during decomposition, or it can be trapped in the deep ocean, where it can remain for hundreds or thousands of years. To understand how the capacity of kelp forests to build long-term carbon stores will change as the climate warms, researchers investigated kelp decomposition rates at 35 locations across the Northern Hemisphere. They collected fragments of fresh kelp and placed them inside a mesh bag within a plastic cage—allowing water and microbes to flow through but excluding larger herbivores—and tethered them to the sea floor for 4–18 weeks.

They found that sea temperature had a strong influence on the rate of decomposition, with kelp fragments in cooler waters degrading more slowly. Modeling showed that kelp decomposition is slow enough that a significant proportion can reach deep ocean carbon sinks. But ongoing sea temperature rises due to climate change could accelerate decomposition, reducing the amount of carbon that is stored for the long-term. A projected increase in sea temperature of 0.4 degrees Celsius by 2050 could reduce the carbon sequestration potential of decomposing kelp by 9%.

However, kelp forests are predicted to expand in higher latitude waters as the climate warms, and here slower decomposition rates could make these forests a major contributor to long-term ocean carbon stores, the authors say.

Filbee-Dexter says that their “experiment measured kelp carbon turnover across twelve regions throughout the northern hemisphere and found that carbon breakdown was strongly linked to ocean temperature. This suggests that kelp carbon storage could be reduced as the ocean warms and that kelp forests in cool polar environments have potential to be important blue carbon ecosystems.”

Loss of RNA editing in the Caᵥ1.3 channel to enhance spatial memory comes at a price