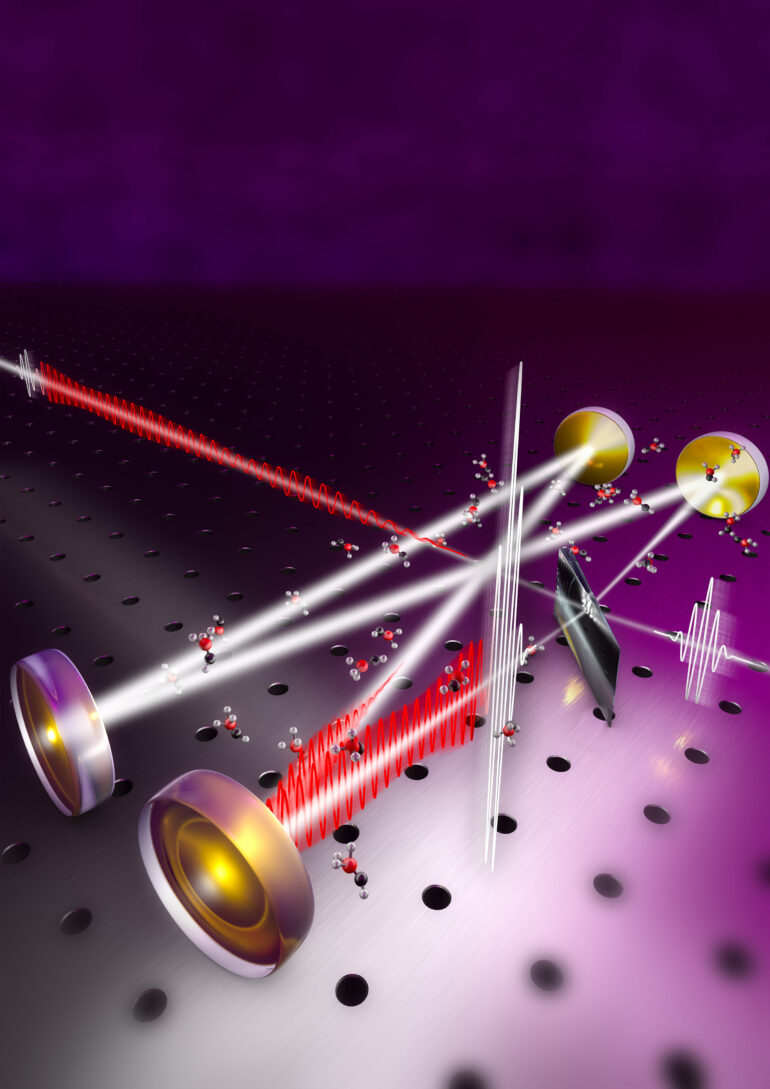 Sensitive animal noses can sniff out trace particles, such as volatile organic compounds, in the ambient air. Humans, on the other hand, are developing innovative technologies for this purpose, such as optical spectroscopy. This uses laser light to detect the molecular composition of gases. It opens up the possibility of even surpassing these “smelling” successes—also for substances that animal noses cannot perceive at all.

Today, the “olfactory power” of spectroscopy does not yet exploit its potential. The principle behind it is if molecules are irradiated with laser light, they begin to vibrate characteristically and also emit light. At low concentrations, however, this emission is very weak. A group of scientists led by PD Dr. Ioachim Pupeza in the attoworld team at Ludwig-Maximilians-Universität München (LMU) and the Max Planck Institute of Quantum Optics (MPQ), in collaboration with scientists at the University of British Columbia and the Leibniz Institute for Photonic Technologies in Jena, is now demonstrating a way to amplify the radiation of molecules that follows the excitation, significantly improving the “sense of smell” of molecular laser spectroscopy. Their study was published in Nature Photonics.

When a musician plucks a guitar string, it begins to vibrate and emits a tone with a pitch, timbre and modulation characteristic of the instrument. The same thing happens when a gas molecule is “hit” by an ultrashort laser pulse: It absorbs some of the energy of the laser pulse. Its atoms begin to vibrate. Instead of a sound wave, the molecule emits a characteristic optical waveform that can be detected spectroscopically. This waveform contains information about the molecular composition of the gas. Unfortunately, this “music of the molecules” is very gentle. This is because only a tiny fraction of the energy contained in the pulse is converted into the slowly decaying light waves that contain this valuable information.

Researchers from the attoworld team at MPQ and LMU, in collaboration with scientists from the University of British Columbia and the Leibniz Institute for Photonic Technologies in Jena, have now found a way to amplify molecular responses to repeating ultrashort laser pulses in the so-called molecular fingerprint spectral region. In the fingerprint spectral region, organic molecules have their characteristic resonances. To do this, the physicists sent the pulses into an optical resonator filled with gas. In the resonator, the beam of laser pulses is guided back into itself via several mirrors, so that the pulses begin to temporally overlap with their predecessors and successors. This amplifies the pulses and the molecular responses. The attoworld laser physicists have now, for the first time, coupled out these optical waveforms of enhanced molecular responses from the cavity and sampled them with field-resolved spectroscopy.

Before this was possible, a number of challenges had to be overcome. “Until now, passive optical resonators could only cover bandwidths of less than 20% of the central optical frequency and were mostly operated at near-infrared wavelengths,” explains Philipp Sulzer, one of the leading authors of the study.

“However, to cover a significant portion of the fingerprint range in the mid-infrared, we had to rethink which optical elements and locking mechanisms could be used to build the cavity. In addition, the ultrashort pulses for field-resolved spectroscopy must not change their waveform during one orbit through the resonator,” adds Maximilian Högner, the other leading author of the study. Finally, the laser physicists found a configuration consisting of four gold-coated mirrors, humidity-controlled air and a wedge-shaped diamond plate to couple the light in and out of the resonator. Their approach allows for an enhancement of the energy contained in the molecular response trailing the impulsive excitation by a factor of more than 500.

“The new measurement setup combines our previous work on enhancement cavities with our expertise in field-resolved spectroscopy. The results open up perspectives for broadband gas spectroscopy with sensitivities of one to a trillion particles. At the same time, because of the comparatively narrow absorption lines in the gas phase, the technique offers high potential for complex gas mixtures such as human breath, in which some components are present in very high concentrations, but some in very low concentrations,” explains Ioachim Pupeza. “Our new approach increases the chances of reliably detecting diseases via human breath in the future and thus providing, for example, new, non-invasive methods for monitoring therapies.”