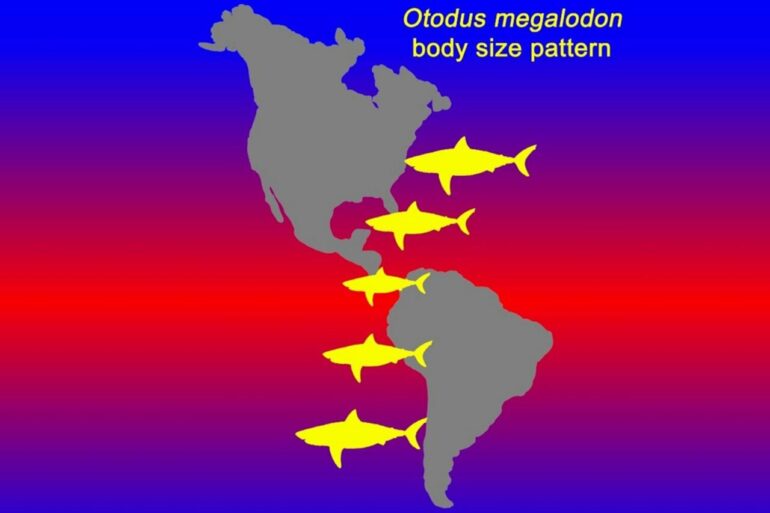 A new study reveals that the iconic extinct Megalodon or megatooth shark grew to larger sizes in cooler environments than in warmer areas.

DePaul University paleobiology professor Kenshu Shimada and coauthors take a renewed look through time and space at the body size patterns of Otodus megalodon, the fossil shark that lived nearly worldwide roughly 15 to 3.6 million years ago. The new study appears in the international journal Historical Biology.

Otodus megalodon is commonly portrayed as a gigantic, monstrous shark in novels and films, such as the 2018 sci-fi thriller “The Meg.” In reality, this species is only known from teeth and vertebrae in the fossil record, although it is generally accepted scientifically that the species was indeed quite gigantic, growing to at least 50 feet (15 meters) and possibly as much as 65 feet (20 meters). The new study re-examined published records of geographic occurrences of Megalodon teeth along with their estimated total body lengths.

Introduced by a German biologist Carl Bergmann in the mid-1800s, Bergmann’s rule is a broad generalization explaining that larger animals thrive in cooler climates because their size helps them retain heat more efficiently compared to animals with smaller bodies. “Scientists constantly search for rules of life that help us predict natural patterns, and it seems that Bergmann’s rule applied to Otodus megalodon,” noted coauthor Victor Perez, a paleontologist at the Calvert Marine Museum in Maryland.

Some Megalodon sites were previously identified as possible nursery areas of the fossil shark because those sites yield smaller Megalodon teeth on average relative to other Megalodon localities. However, the new study found that the previously identified nursery areas for Megalodon are located near the equator, where water is warmer. “It is still possible that O. megalodon could have utilized nursery areas to raise young sharks. But our study shows that fossil localities consisting of smaller Megalodon teeth may instead be a product of individual sharks attaining smaller overall body sizes simply as a result of warmer water,” said coauthor Harry Maisch, a faculty member at Bergen Community College and Fairleigh Dickinson University in New Jersey.

“The idea of this new study originated from casual conversation that took place during a recent fishing trip to the Florida Keys by the lead author, his family and me, stemming from a basic question: where do large fish live?” said coauthor Martin Becker, a professor of environmental science at William Paterson University in New Jersey. Despite being initiated by this simple question, “the results of this study have important implications for understanding how modern climate change is rapidly accelerating marine habitat shifts to more polar latitudes in apex predators such as sharks,” noted coauthor Michael Griffiths and another professor of environmental science at William Paterson University.

“The main conclusion of this study is that not all geographically different Megalodon individuals grew to gigantic sizes equally. The common notion that the species reached 18–20 m TL should be applied primarily to populations that inhabited cooler environments,” said Shimada.