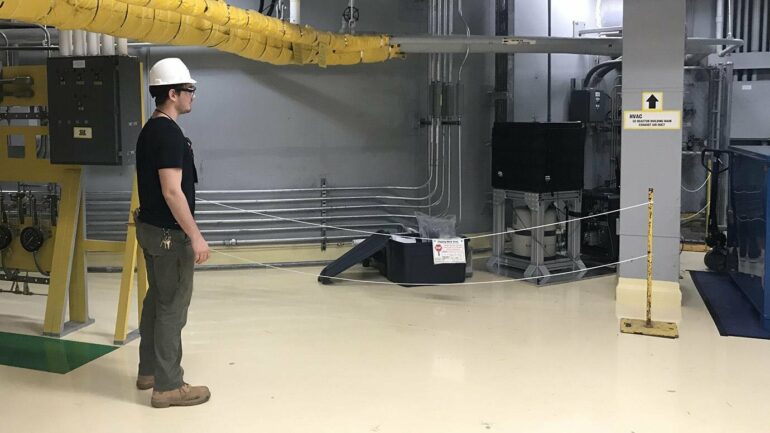 A nuclear reactor at an Illinois energy plant is helping University of Chicago scientists learn how to catch and understand the tiny, elusive particles known as neutrinos.

At Constellation’s (formerly Exelon) Dresden Generating Station in Morris, Illinois, the team took the first measurements of neutrinos coming off a nuclear reactor with a tiny detector. These particles are extremely hard to catch because they interact so rarely with matter, but power reactors are one of the few places on Earth with a high concentration of them.

“This was an exciting opportunity to benefit from the enormous neutrino production from a reactor, but also a challenge in the noisy industrial environment right next to a reactor,” said Prof. Juan Collar, a particle physicist who led the research. “This is the closest that neutrino physicists have been able to get to a commercial reactor core. We gained unique experience in operating a detector under these conditions, thanks to Constellation’s generosity in accommodating our experiment.”

With this knowledge, the group is planning to take more measurements that may be able to tease out answers to questions about the fundamental laws governing particle and nuclear interactions.

The technique may also be useful in nuclear nonproliferation, because the neutrinos can tell scientists about what’s going on in the core of the reactor. Detectors could be placed next to reactors as a safeguard to monitor whether the reactor is being used for energy production or to make weapons.

Neutrinos are sometimes called “ghost particles” because they pass invisibly through almost all matter. (Billions have already zipped through your body today without your notice, en route from elsewhere in outer space.) But if you can catch them, they can tell you about what’s happening where they came from, and about the fundamental properties of the universe.

In particular, scientists would like to learn about specific aspects of neutrino behavior—whether they have electromagnetic properties (for instance, a “magnetic moment”), and whether they interact with as-yet unknown particles hiding from our notice, or in new ways with known particles. Taking extensive measurements of as many neutrinos as possible can help narrow down these possibilities.

The need for many neutrinos is what drew Collar’s team to nuclear reactors. “Commercial reactors are the largest source of neutrinos on Earth by orders of magnitude,” he said. In the normal course of operation, nuclear reactors produce astronomical numbers of neutrinos per second. They occur when atoms inside the reactor break up into lighter elements, and release some of the energy in the form of neutrinos.

However, there’s a problem. Because neutrinos are so lightweight, and interact so rarely, scientists normally have to find them by filling an enormous tank with detecting fluids and then search for the telltale signal that a passing particle has produced one of a number of known reactions in it.

But there’s no room inside a commercial nuclear reactor for a multi-ton detector. The researchers needed something much, much smaller. Luckily, Collar is an expert in building such devices; he previously lead a team that built the world’s smallest neutrino detector.

In a second stroke of luck, Illinois is one of the leading nuclear energy states—about half the state’s electricity is generated at nuclear reactors. Constellation granted Collar permission to test the detector at Dresden Generating Station, one of the first-ever commercial nuclear plants in the nation.

Previously, Collar and his team had tested their tiny detectors at a particle accelerator in Oak Ridge National Laboratory in Tennessee, where they were able to carefully control much of the environment in order to get a good signal. But in order for the detector to work at Dresden, they had to build a new version adapted to deal with the much noisier environment of an operating commercial reactor.

“You’re getting radiation, heat, vibration from the turbines, radiofrequency noise from the pumps and other machinery,” Collar said. “But we managed to work around all the challenges that were thrown our way.”

They designed the detector with a complex multi-layered shielding to protect it from other stray particles that would contaminate the data. Eventually, they were able to leave the detector in place to function unattended for several months, taking data all the while.

The team next hopes to take data at another reactor down the road at Constellation’s Braidwood Generating Station, or at the Vandellòs nuclear plant in coastal Spain. “This method can really contribute to our understanding of neutrino properties,” Collar said. “A lot of theoretical knowledge can be extracted from our data.”

The knowledge about operating small detectors in such noisy environments is also in high demand. “There is an interest in the nuclear nonproliferation community to set detectors next to reactors, because they can tell you what’s going on in the core—revealing any deviations from the declared use,” Collar said.

The output of neutrinos changes according to what kind of fuel the reactor is burning and what it’s producing, so detectors should be able to monitor for warning signs of weapons production, or whether fuel is being secretly diverted elsewhere . But to make this goal a reality, such detectors would have to be small, robust and easy to use; Collar said the Dresden work helps gather valuable data to make such detectors possible.

There may also be many other uses for neutrino detectors. “For example, once we have sufficiently sensitive neutrino detectors, you could use them to map the interior of the Earth—perhaps even detect oil or other useful deposits,” Collar said. “A lot of thinking along these lines has been done, but it is still in the future.”

While working on the design, Collar was reminded that his laboratory on campus continues a line of work initiated by Prof. Willard Libby in the 1950s to discover how to use carbon-dating to tell the age of an object.

“These pioneers had to come up with techniques that we still use today to find a relatively small signal amongst a great deal of background noise,” he said. “It’s rewarding to think our work is part of a long local tradition. And Illinois is a special place for nuclear power generation, for similar reasons.”

The research was published in Physical Review D and on arXiv.