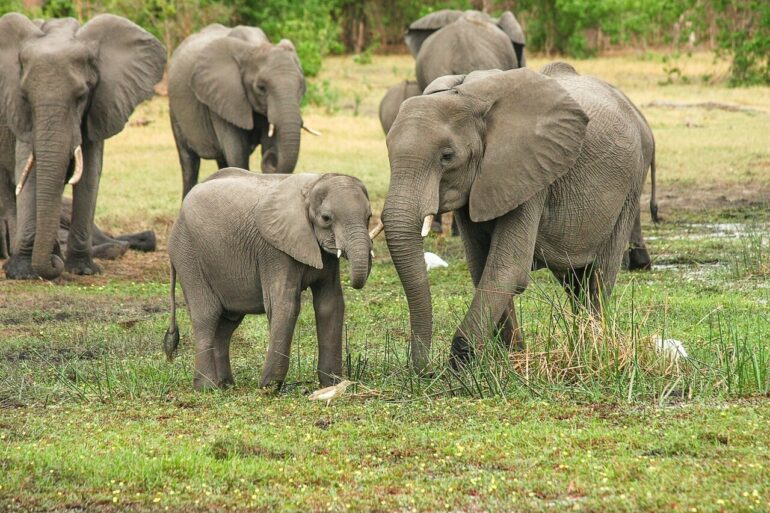 When it comes to helping mitigate the effects of climate change by absorbing carbon, flora rather than fauna usually comes to mind. A new study published in Current Biology now explores the role of large wild animals in restoring ecosystems and battling climate change.

“Conservation efforts usually focus on either trees and carbon or the broad conservation appeal of large mammals. This study looked at whether it was possible to align these agendas—under what context could protecting and restoring large animal wildlife help us tackle and adapt to climate change.”

The researchers highlighted three key eco-touchpoints where large animals such as elephants, rhinoceroses, giraffes, whales, bison, and moose had the greatest potential to mitigate climate change: carbon stocks, albedo (the ability of surfaces to reflect solar radiation (energy from the sun) and fire regimes.

When they graze, large herbivores disperse seeds, clear vegetation and fertilize the soil, which helps build more complex and more resilient ecosystems. These activities can maintain and increase carbon stocks in the soil, roots and above-ground parts of plants, helping to reduce CO2 in the atmosphere.

When large animals graze and trample vegetation they can change the habitat from dense shrubs and trees to open mixes of grass and shrubs or trees, which can also reveal snow-covered ground in polar regions. These open habitats tend to be paler (with higher albedo) and reflect more solar radiation into the atmosphere, cooling the Earth’s surface, rather than absorbing it and warming the Earth’s surface.

In 2021, global wildfire CO2 emissions reached a record high. When wildfires burn, the carbon stored in trees and vegetation is released into the atmosphere as greenhouse gases. Elephants, rhinoceroses, zebras and other large grazing animals can lessen wildfire risk by browsing on woody vegetation that could otherwise fuel the fires, trampling paths and making other gaps in vegetation that act as firebreaks.

In temperate, tropical and subtropical grassland ecosystems, large animals can reduce forest and bush fires, increase albedo and help retain carbon in the vegetation and the soil. Protecting large animal wildlife and their role in these complex ecosystems supports local biodiversity and ecological resilience.

Dr. Tonya Lander, Department of Plant Sciences at Oxford University said: “Animals can also help with localized adaptation to climate change in these environments by diversifying vegetation and increasing habitat heterogeneity. Diversity of species and microhabitats can make the ecosystem as a whole more able to resist climate change, return to a stable state following a climate-related disturbance, or find a new stable state that functions within the changed and changing climate.”

When large herbivores are present in tundra ecosystems, they help to keep down woody plant encroachment which encourages local flowering plants and grasses—and exposes more of the ground to the cold air. That exposure maintains the permafrost and prevents the carbon in the soil from getting released into the atmosphere. Programs that rewild bison and other animals into the arctic tundra can play important roles in both conservation and climate change adaptation at a local scale.

In marine ecosystems, whales and other large animals fertilize phytoplankton. Phytoplankton is estimated to capture 37 billion tons of CO2 each year and may release particles into the air which can help seed clouds and reflect sunlight into the atmosphere.

Large terrestrial and marine carnivores also affect these processes through their influence on herbivore abundance and behavior.

The meat, the muscle, and the motion of cell fusion

Professor Malhi concluded: “The report also highlights where there are gaps in our knowledge, such as in our understanding of soils and the deep oceans, where more research may identify new opportunities for both restoring large animal wildlife and tackling climate change.”

The full paper “The role of large wild animals in climate change mitigation and adaptation” can be read in Current Biology.