Does exercise drive development? In the sea anemone, the way you move matters 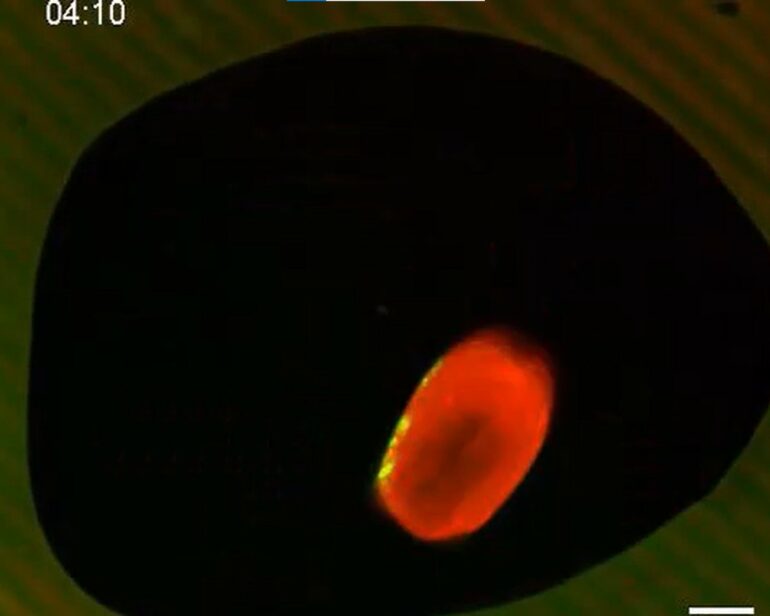 As humans, we know that an active lifestyle gives us some control over our form. When we hit the pavement, track our steps, and head to the gym, we can maintain muscle development and reduce body fat. Our physical activity helps shape our physical figure. But what if we sustained similar aerobics in our earlier forms? Is it possible that our embryos also exercised?

Researchers at EMBL’s Ikmi group turned these questions towards the sea anemone to understand how behavior impacts body shape during early development. Sea anemones, it turns out, also benefit from maintaining an active lifestyle, particularly as they grow from ovoid-shaped swimming larvae to sedentary, tubular polyps. This morphological transformation is a fundamental transition in the life history of many cnidarian species, including the immortal jellyfish and the builders of our planet’s richest and most complex ecosystem, coral reefs.

During development, starlet sea anemone larvae (Nematostella) perform a specific pattern of gymnastic movements. Too much or too little muscle activity or a drastic change in the organization of their muscles can deviate the sea anemone from its normal shape.

In a new paper published in Current Biology, the Ikmi group explores how this kind of behavior impacts animal development. With expertise in live imaging, computational methodology, biophysics, and genetics, the multidisciplinary team of scientists turned 2D and 3D live imaging into quantitative features to track changes in the body. They found that developing sea anemones behave like hydraulic pumps, regulating body pressure through muscle activity, and using hydraulics to sculpt the larval tissue.

“Humans use a skeleton made of muscles and bones to exercise. In contrast, sea anemones use a hydroskeleton made of muscles and a cavity filled with water,” said Aissam Ikmi, EMBL group leader. The same hydraulic muscles that help the developing sea anemones move also seem to impact how they develop. Using an image analysis pipeline to measure body column length, diameter, estimated volume, and motility in large data sets, scientists found that Nematostella larvae naturally divide themselves into two groups: slow- and fast-developing larvae. To the team’s surprise, the more active the larvae, the longer they take to develop. “Our work shows how developing sea anemones essentially ‘exercise’ to build their morphology, but it seems that they cannot use their hydroskeleton to move and develop simultaneously,” Ikmi said.

“There were many challenges to doing this research,” explains first author and former EMBL predoc Anniek Stokkermans, now a postdoc at the Hubrecht Institute in the Netherlands. “This animal is very active. Most microscopes cannot record fast enough to keep up with the animal’s movements, resulting in blurry images, especially when you want to look at it in 3D. Additionally, the animal is quite dense, so most microscopes cannot even see halfway through the animal.”

To look both deeper and faster, Ling Wang, an application engineer in the Prevedel group at EMBL, built a microscope to capture living, developing sea anemone larvae in 3D during its natural behavior.

“For this project, Ling has specifically adapted one of our core technologies, Optical Coherence Microscopy or OCM. The key advantage of OCM is that it allows the animals to move freely under the microscope while still providing a clear, detailed look inside, and in 3D,” said Robert Prevedel, EMBL group leader. “It has been an exciting project that shows the many different interfaces between EMBL groups and disciplines.”

With this specialized tool, the researchers were able to quantify volumetric changes in tissue and body cavity. “To increase their size, sea anemones inflate like a balloon by taking up water from the environment,” Stokkermans explained. “Then, by contracting different types of muscles, they can regulate their short-term shape, much like squeezing an inflated balloon on one side, and watching it expand on the other side. We think this pressure-driven local expansion helps stretch tissue, so the animal slowly becomes more elongated. In this way, contractions can have both short-term and a long-term effects.”

To better understand the hydraulics and their function, researchers collaborated with experts across disciplines. Prachiti Moghe, an EMBL predoc in the Hiiragi group, measured pressure changes driving body deformations. Additionally, mathematician L. Mahadevan and engineer Aditi Chakrabarti from Harvard University introduced a mathematical model to quantify the role of hydraulic pressures in driving system-level changes in shape. They also engineered reinforced balloons with bands and tapes that mimic the range of shapes and sizes seen in both normal and muscle-defective animals.

“Given the ubiquity of hydrostatic skeletons in the animal kingdom, especially in marine invertebrates, our study suggests that active muscular hydraulics play a broad role in the design principle of soft-bodied animals,” Ikmi said. “In many engineered systems, hydraulics is defined by the ability to harness pressure and flow into mechanical work, with long-range effects in space-time. As animal multicellularity evolved in an aquatic environment, we propose that early animals likely exploited the same physics, with hydraulics driving both developmental and behavioral decisions.”

As the Ikmi group previously studied the connections between diet and tentacle development, this research adds a new layer to understanding how body forms develop.

“We still have many questions from these new findings. Why are there different activity levels? How do cells exactly sense and translate pressure into a developmental outcome?” Stokkermans asked as she considers where this research leads. “Furthermore, since tube-like structures form the basis of many of our organs, studying the mechanisms that apply to Nematostella will also help gain further understanding in how hydraulics play a role in organ development and function.”


Citation:
Does exercise drive development? In the sea anemone, the way you move matters (2022, September 16)