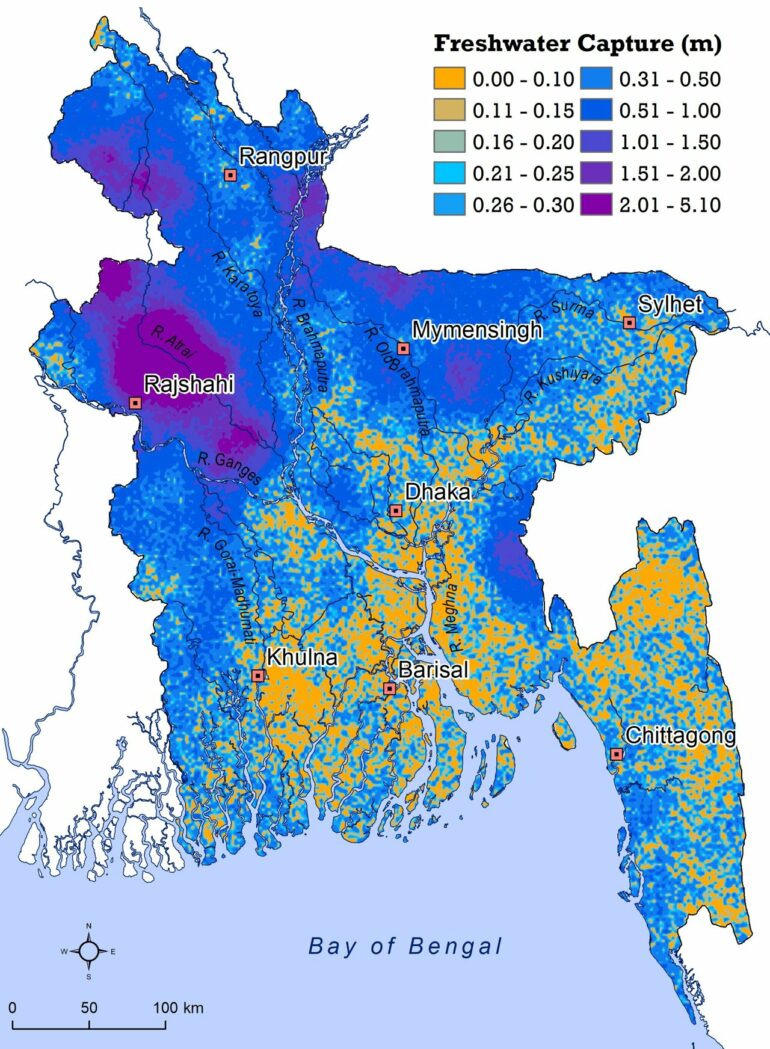 Collective groundwater pumping by millions of farmers in Bangladesh in the dry season each year has created vast natural reservoirs underground that, over a 30-year-period, rival the world’s largest dams—these sustain irrigation that has transformed this previously famine-prone country to a food-secure nation, according to a new study led by UCL researchers.

Published in Science, the study explores the combined impact of 16 million smallholder farmers pumping shallow groundwater during the dry season to irrigate rice paddies in the Bengal Basin of Bangladesh between 1988 and 2018.

Through this process, which the authors describe as “The Bengal Water Machine”, more than 75 cubic kilometers of freshwater was “captured” over 30-years—a volume equivalent to the combined reservoir capacities of China’s Three Gorges Dam and the Hoover Dam in the US.

They highlight this intervention as a sustainable alternative to conventional approaches to seasonal river flow storage for irrigation, including dams and reservoirs, which are challenging to construct in densely populated alluvial plains, like the Bengal Basin, that comprise extensive flat landforms of sand, silt and clay laid down by annual floodwaters.

“This novel intervention helps to address seasonal imbalances in rainfall by increasing the capture and storage of seasonal freshwater surpluses and mitigating the monsoonal flood risk without the use of dams.”

The study authors argue that this simple intervention has the potential to be replicated across alluvial plains more widely, including other Asian mega-deltas such as the Mekong Delta and Huang He (Yellow) River Delta, which are similarly vulnerable to the impacts of climate change. This Bengal Water Machine could help to enhance global food security and resilience to climate extremes amplified by global warming.

“In a warming world, the demonstrated resilience of this conjunctive use of surface water and groundwater to hydrological extremes of the dry and monsoon seasons that are amplified by climate change is of strategic importance to global food security.”

To calculate their findings, the researchers analyzed a million, weekly groundwater-level observations from 465 wells across Bangladesh, taken between 1988 and 2018 from a network of 1,250 monitoring stations.

Professor Taylor added: “Whilst previous estimates of the magnitude of freshwater captured have been hypothetical and based on modeled scenarios, this is the first study to quantify the groundwater volume based on observations, revealing its significant potential.”

The authors note that their findings highlight the importance of long-term hydrological monitoring to assess the status and trends of a country’s groundwater resources, which will become ever more important in the face of our changing climate.

However, the research also highlights limitations to the operation of the Bengal Water Machine in areas of the country where leakage of water during the monsoon season is insufficient to fully replenish groundwater withdrawn during the dry season. In these areas, pumping depletes groundwater resources making these inaccessible to households reliant on shallow wells for drinking-water.

The authors therefore recommend that further research is undertaken to establish where in the Bengal Basin and other Asian mega-deltas people can benefit from this nature-based solution to storing seasonal freshwater surpluses.

Co-author Professor Kazi Matin Ahmed of Dhaka University added: “It is vital to assess the suitability of locations for the operation of the Bengal Water Machine to maximize benefits to farmers and minimize the risks of groundwater depletion.

“The piloting of the operation in suitable areas is therefore needed before this can be upscaled more widely to address uncertainties in its operation to monsoonal variability under climate change.”