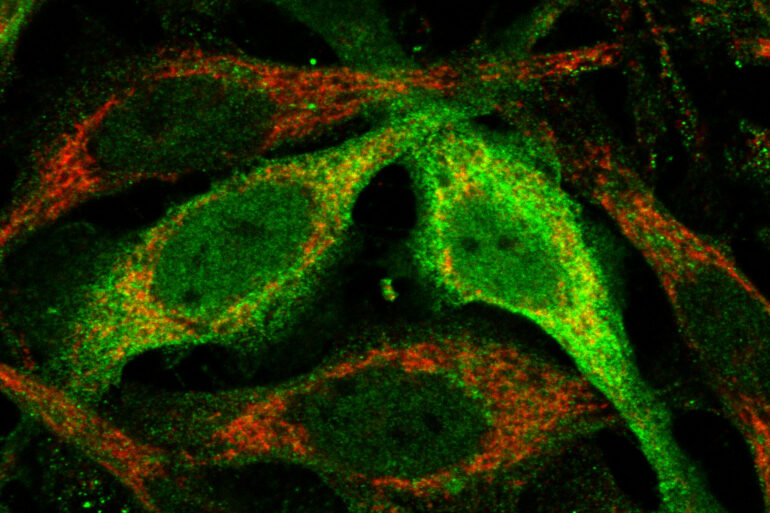 Antioxidants are often advertised as a cure-all in nutrition and offered as dietary supplements. However, our body also produces such radical scavengers itself, one of which is coenzyme Q. Now researchers from the Max Planck Institute for Biology of Aging have discovered how the substance, which is produced in our mitochondria, reaches the cell surface and protects our cells from dying.

Coenzyme Q is an antioxidant that is essential for our body. A deficiency of coenzyme Q leads to serious diseases such as Leigh syndrome—a hereditary disease in which certain brain regions become affected and, among other things, muscle weakness can occur. A deficiency of coenzyme Q is also one of the first signs of aging and can occur as early as the early 20s. But why can’t we simply take this substance in with our food?

“Coenzyme Q is a highly hydrophobic molecule that our bodies absorb very little from food,” explains Soni Deshwal, scientist at the Max Planck Institute for Biology of Aging and lead author of the study. But it is also a problem in our cells that coenzyme Q is not water soluble. The antioxidant is formed in mitochondria and must pass through the watery cell interior called cytoplasm to the surface of the cells in order to neutralize oxidized lipid species.

“With our research, we have now been able to identify the proteins involved in coenzyme Q transport from the mitochondria to the cell surface,” explains Deshwal. The researchers found that an enzyme called STARD7 helps transport the coenzyme. This protein is not only localized in the mitochondria, but also inside the cytoplasm.

Band-aids for the cell surface

The paper is published in the journal Nature Cell Biology.

In the long term, the researchers hope that a precise understanding of this transport process will enable Coenzyme Q to be delivered into the cells of affected patients and thus provide a new therapeutic approach for diseases such as Leigh syndrome.


Citation:
How antioxidants produced by mitochondria reach the cell surface to protect against death (2023, January 20)