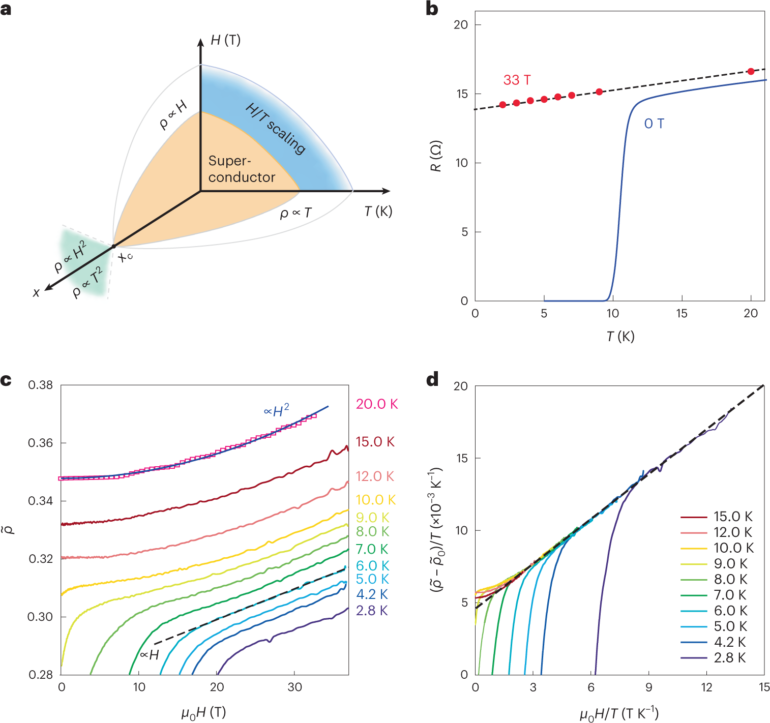 In a recent study, researchers led by Chen Qihong and Jin Kui from the Institute of Physics (IOP) of the Chinese Academy of Sciences (CAS) used an ionic-liquid gating technique to tune the transition temperature (Tc) of FeSe, the structurally simplest iron-based superconductor, and found a universal quantitative relationship between superconductivity and the strange-metal state, which gives insight into the mechanism responsible for high-temperature superconductivity. The study was published in Nature Physics.

Clues are thought to lie in the “strange-metal” behavior of the normal state, that is, the state at temperatures above the superconducting Tc. Examples of such behavior include linear-in-temperature (T-linear) resistivity, which is unlike the quadratic temperature-resistivity relationship of conventional Fermi liquids.

Jin Kui’s group has developed an advanced composition-spread (combinatorial) film fabrication technique and subsequently uncovered a quantitative relationship between Tc and A1 (the coefficient of T-linear resistivity) in an electron-doped cuprate, namely Tc ∝ (A1)0.5.

“One key question is whether or not the scaling exponent in this equation is the same for other high-Tc superconductors,” said Jin. “It is difficult to accumulate enough reliable data points to conclusively determine this power-law index because data obtained by conventional methods are generally scarce and have large variability.”

In their new study, they continuously tuned the superconductivity of FeSe by ionic-liquid gating, which realized electron doping through hydrogen ion injection. To monitor the doping process, the researchers designed a two-coil mutual inductance measurement device integrated with ionic-liquid gating. Using this device, they achieved uniform bulk tuning of FeSe, with Tc varying from 8 K to above 45 K.

By using high-field magnets, they obtained clear signatures of the strange-metal state in FeSe, namely T-linear and linear-in-field (H-linear) resistivity, and an H/T scaling of magnetoresistance. Subsequently, they mapped the relationship between superconductivity and the strange-metal state over a wide doping range. With A1 and Tc extracted from each doping level, a quadratic relationship between A1 and Tc emerged out of the systematic data, which indicated that the power-law index is 0.5 for FeSe.

Combining this result with the relationship previously reported in cuprate superconductors leads to the conclusion that this quadratic dependence is universal and robust. This discovery provides strong evidence for a unified picture of the interplay between strange metallicity and unconventional superconductivity.

Considering the highly universal behavior observed across these systems—the T-linear and H-linear resistivity and the interplay between the strange-metal state and superconductivity—it is highly likely that the same, or similar, mechanism is also at work in iron-based superconductors. Therefore, spin fluctuations may have a common role in unconventional superconductors.

“This study is exciting because the discovery of a quantitative relationship between the strange metal and superconductivity indicates that the mechanism may be applicable to other superconductors, such as cuprates,” said David Abergel, chief editor of Nature Physics.