How electric fish were able to evolve electric organs 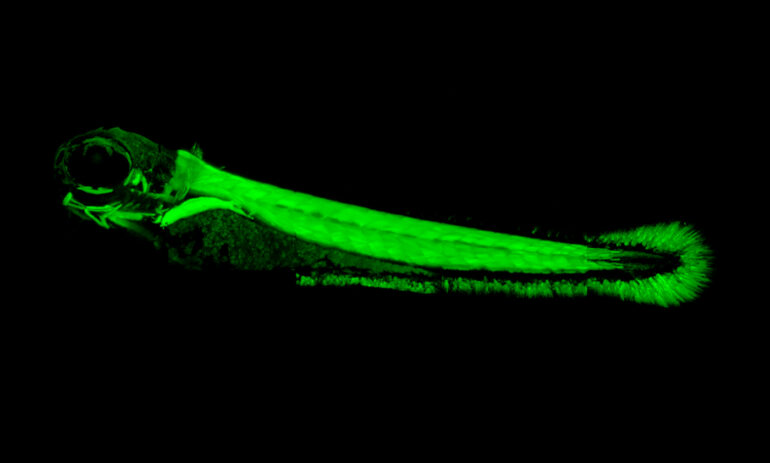 Electric organs help electric fish, such as the electric eel, do all sorts of amazing things: They send and receive signals that are akin to bird songs, helping them to recognize other electric fish by species, sex and even individual. A new study in Science Advances explains how small genetic changes enabled electric fish to evolve electric organs. The finding might also help scientists pinpoint the genetic mutations behind some human diseases.

Evolution took advantage of a quirk of fish genetics to develop electric organs. All fish have duplicate versions of the same gene that produces tiny muscle motors, called sodium channels. To evolve electric organs, electric fish turned off one duplicate of the sodium channel gene in muscles and turned it on in other cells. The tiny motors that typically make muscles contract were repurposed to generate electric signals, and voila! A new organ with some astonishing capabilities was born.

“This is exciting because we can see how a small change in the gene can completely change where it’s expressed,” said Harold Zakon, professor of neuroscience and integrative biology at The University of Texas at Austin and corresponding author of the study.

In the new paper, researchers from UT Austin and Michigan State University describe discovering a short section of this sodium channel gene—about 20 letters long—that controls whether the gene is expressed in any given cell. They confirmed that in electric fish, this control region is either altered or entirely missing. And that’s why one of the two sodium channel genes is turned off in the muscles of electric fish. But the implications go far beyond the evolution of electric fish.

“This control region is in most vertebrates, including humans,” Zakon said. “So, the next step in terms of human health would be to examine this region in databases of human genes to see how much variation there is in normal people and whether some deletions or mutations in this region could lead to a lowered expression of sodium channels, which might result in disease.”

The study’s first author is Sarah LaPotin, a research technician in Zakon’s lab at the time of the research and currently a doctoral candidate at the University of Utah. In addition to Zakon, the study’s other senior authors are Johann Eberhart, a professor of molecular biosciences at UT Austin, and Jason Gallant, associate professor of integrative biology at Michigan State University.

Zakon said the sodium channel gene had to be turned off in muscle before an electric organ could evolve.

“If you rewound the tape of life and hit play, would it play back the same way or would it find new ways forward? Would evolution work the same way over and over again?” said Gallant, who breeds the electric fish from South America that were used in part of the study. “Electric fish let us try to answer that question because they have repeatedly evolved these incredible traits. We swung for the fences in this paper, trying to understand how these sodium channel genes have been repeatedly lost in electric fish. It really was a collaborative effort.”

One of the next questions the researchers hope to answer is how the control region evolved to turn on sodium channels in the electric organ.