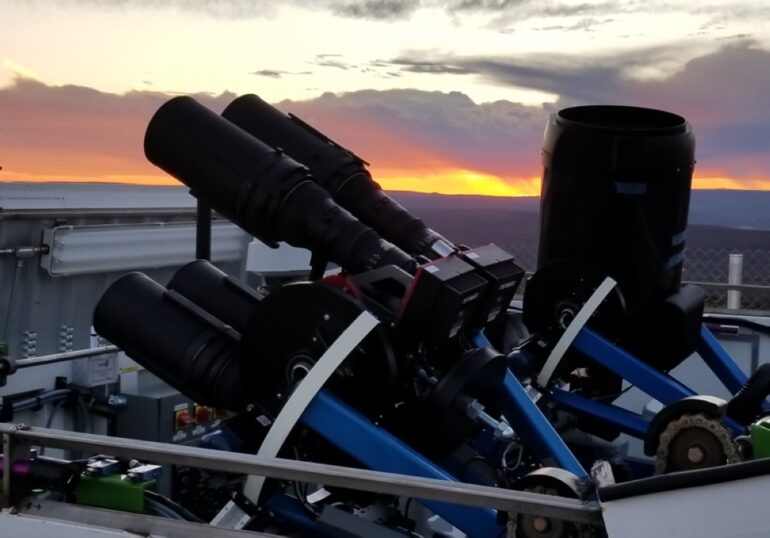 Ohio State University astronomers have identified about 116,000 new variable stars, according to a new paper.

These heavenly bodies were found by The All-Sky Automated Survey for Supernovae (ASAS-SN), a network of 20 telescopes around the world that can observe the entire sky about 50,000 times deeper than the human eye. Researchers from Ohio State have operated the project for nearly a decade.

Now in a paper published on arXiv, an open-access preprint server, researchers describe how they used machine learning techniques to identify and classify variable stars—celestial objects whose brightness waxes and wanes over time, especially if observed from our perspective on Earth.

The changes these stars undergo can reveal important information about their mass, radius, temperature and even their composition. In fact, even our sun is considered a variable star. Surveys like ASAS-SN are an especially important tool for finding systems that can reveal the complexities of stellar processes, said Collin Christy, the lead author of the paper and an ASAS-SN analyst at Ohio State.

“Variable stars are sort of like a stellar laboratory,” he said. “They’re really neat places in the universe where we can study and learn more about how stars actually work and the little intricacies that they all have.”

But to locate more of these elusive entities, the team first had to bring in previously unused data from the project. For years, ASAS-SN gazed at the sky using V-band filters, optical lenses that can only identify stars whose light falls into the spectrum of colors visible to the naked eye. But in 2018, the project shifted to using g-band filters—lenses that can detect more varieties of blue light—and the network went from being able to observe about 60 million stars at a time to more than 100 million.

But unlike ASAS-SN’s citizen science campaign, which relies on volunteers to sift through and classify astronomical data, Christy’s study required the help of artificial intelligence.

“If you want to look at millions of stars, it’s impossible for a few humans to do it by themselves. It’ll take forever,” said Tharindu Jayasinghe, co-author of the paper, a doctoral student in astronomy and an Ohio State presidential fellow. “So we had to bring something creative into the mix, like machine learning techniques.”

The new study focused on data from Gaia, a mission to chart a three-dimensional map of our galaxy, as well as from 2MASS and AllWISE. Christy’s team used a machine learning algorithm to generate a list of 1.5 million candidate variable stars from a catalog of about 55 million isolated stars.

Afterward, researchers whittled the number of candidates down even further. Of the 1.5 million stars they studied, nearly 400,000 turned out to be real variable stars. More than half were already known to the astronomy community, but 116,027 of them proved to be new discoveries.

Although the study needed machine learning to complete it, Christy’s team says there is still a role for citizen scientists. In fact, volunteers with the citizen science campaign have already started to identify junk data, he said. “Having people tell us what our bad data looks like is super useful, because initially, the algorithm would look at the bad data and try to make sense of it,” Christy said.

Space mission shows Earth’s water may be from asteroids: study

But using a training set of all that bad data allows the team to modify and improve the overall performance of their algorithm. “This is the first time that we’re actually combining citizen science with machine learning techniques in the field of variable star astronomy,” said Jayasinghe. “We’re expanding the boundaries of what you can do when you put those two together.”