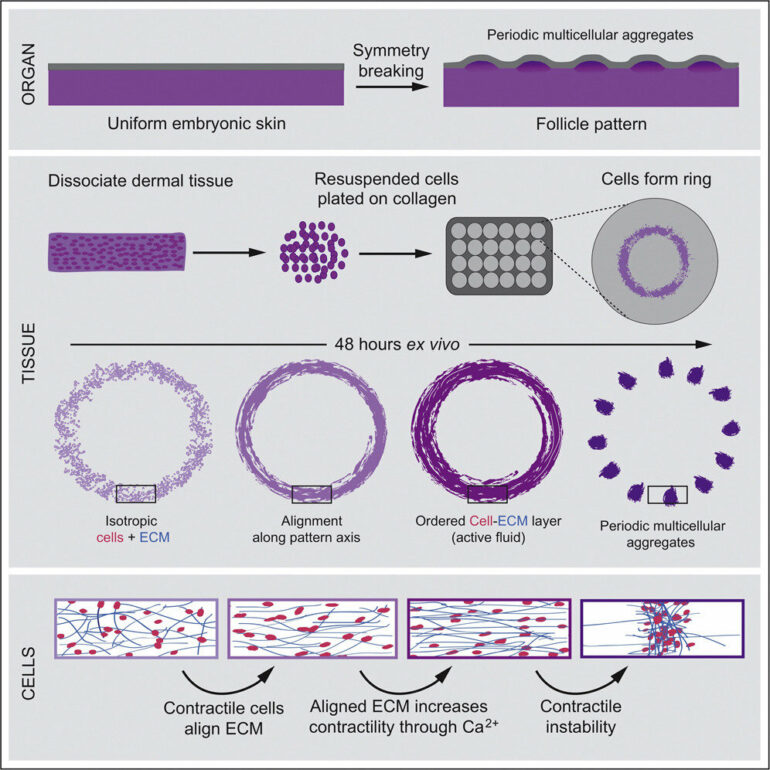 Early development is like a carefully choreographed dance, with uniform swaths of cells arranging themselves into elaborate patterns—a first step toward the formation of functional organs. A flat layer of skin cells, for instance, must transition into one studded with neat arrays of hair cells and sweat glands.

A new study from the Laboratory of Morphogenesis at The Rockefeller University, co-led by Amy Shyer and Alan Rodrigues, reveals that developmental patterns can emerge spontaneously from physical interactions between cell collectives and the matrix that surrounds them. Such interactions generate fluid-like properties allowing for pattern formation analogous to how a film of water on the windshield retracts into droplets.

Using chicken skin as a model system, the researchers found that mechanical forces between cells break the symmetry of the tissue, nudging the cells to aggregate into periodically spaced bundles that will later grow feathers throughout the skin tissue. These structural changes trigger secondary gene-expression changes that lead to classic molecular signaling, pushing development further along.

The findings, published in Cell, provide a better understanding of the physical factors involved in the shaping of organs.

“Organ development involves a continuous collaboration between mechanical and molecular processes,” says assistant professor Amy Shyer. “Understanding the precise sequence of the steps in that feedback loop might help us repair tissues or study tumor formation from new angles.”

When new organs emerge out of homogenous embryonic tissue, they seem to take the optimal structure out of many possibilities. “One of the mysterious things about these structures is that they have a perfect pattern built into them that really maximizes the efficiency of their function,” Shyer says.

Historically, genes got much of the credit for this feat of biological engineering. It’s our genes, the thinking went, that provide a molecular blueprint which determines how cells specialize into organ-specific components, and how they reorder themselves to give rise to intricate structures. But some scientists have found reasons to question that theory. For example, some structures form at such a large scale that it is difficult to explain how molecular signals oversee pattern formation over such a long range, hinting that other mechanisms must be at play.

Taking an alternative perspective, Shyer and Rodrigues are focusing on the role of collective cell mechanics in morphogenesis. Their earlier work has shown that morphological changes in bird skin appear before the genes implicated in follicle formation are expressed. “So it’s not necessarily the genes that initiate the first morphological changes,” Rodrigues says. “Instead, we found that the cells self-organize to initiate follicles. At the same time, we didn’t know the precise mechanism that enables this self-organization.”

In the new study, Shyer and Rodrigues’ team set out to get a closer look at what exactly propels the tissue to change. To zoom in on the moments leading up to pattern formation, the researchers used primary skin cells freshly taken from chicken embryos, and added collagen, an essential component that provides structure to the skin. Just these two ingredients were enough for the whole process to unfold in a lab dish. This system allowed the researchers to reconstruct natural skin development while eliminating any potential molecular cues from neighboring tissues.

Watching the process of cell aggregation frame by frame, Karl Palmquist, lead author of the study, found that the contractile skin cells started to attach to the mesh-like, collagen-based substrate surrounding them and pull on it. He then made a key observation: The pulling force of many cells realigns the matrix into a highly ordered structure that resists the pull. The cells, sensing the increased tension, increasingly contract, ramping up their pull. Eventually, reciprocal forces between the cells and the extracellular matrix generate collective alignment of cells that enables the field of cells to transform into an ordered pattern of follicle-like aggregates.

Together with Anna Erzberger, a senior author who was a former postdoc in the lab of James A. Hudspeth and is currently a group leader at the European Molecular Biology Laboratory in Heidelberg, Germany, the team developed a theoretical model of developing skin based on the physical properties of fluids. This model accurately predicted the spontaneous formation of regular multicellular aggregates.

The team is planning to investigate how similar multicellular mechanics may be integral in structuring other tissues of the body in development and disease.


Citation:
How intricate patterns arise in developing tissues (2022, May 31)