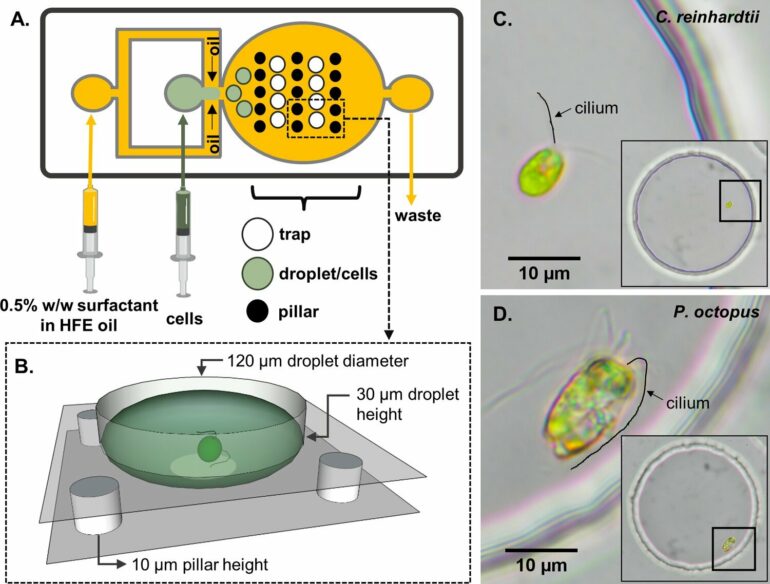 The movement patterns of microscopic algae can be mapped in greater detail than ever before, giving new insights into ocean health, thanks to new technology developed at the University of Exeter.

The new platform allows scientists to study in unprecedented detail the patterns of movement of microscopic algae. The insight could have implications for understanding and preventing harmful algal blooms, and for the development of algal biofuels, which could one day provide an alternative to fossil fuels.

Microscopic algae play a key role in ocean ecosystems, forming the bases of aquatic food webs, and sequestering most of the world’s carbon. The health of oceans therefore depends on maintaining stable algal communities. There is increasing concern that changes in ocean composition such as acidification may disrupt algae spread and community make-up. Many species move and swim around to locate sources of light or nutrients, in order to maximize photosynthesis.

The new microfluidic technology, the details of which are now published in eLife, will allow scientists to trap and image single microalgae swimming inside microdroplets for the first time. The cutting-edge development has enabled the team to study how microscopic algae explore their micro-environment, and tracked and quantified their behaviors long-term. Importantly, they characterized how individuals differ from one another and respond to sudden changes in the make-up of their habitat such as the presence of light or certain chemicals.

Lead author Dr. Kirsty Wan, from the University of Exeter’s Living Systems Institute, said, “This technology means we can now probe and advance our understanding of swimming behaviors for any microscopic organism, in detail that has not been possible previously. This will help us understand how they control their swimming patterns and potential for adaptability to future climate change, and other challenges.”

In particular, the team has discovered that the presence of interfaces with strong curvature, in combination with the microscopic corkscrewing swimming of the organisms, induce macroscopic chiral movement (always clockwise or counter-clockwise) seen in the average trajectory of cells.

The technology has a wide range of potential uses, and could represent a new way of classifying and quantifying not only the environmental intelligence of cells, but of complex patterns of behavior in any organism, including animals.

Dr. Wan added, “Ultimately, we aim to develop predictive models for swimming and culturing of microbial and microalgae communities in any relevant habitat leading to deeper understanding of present and future marine ecology. Knowledge of detailed behavior occurring at the individual-cell level is therefore an essential first step.”