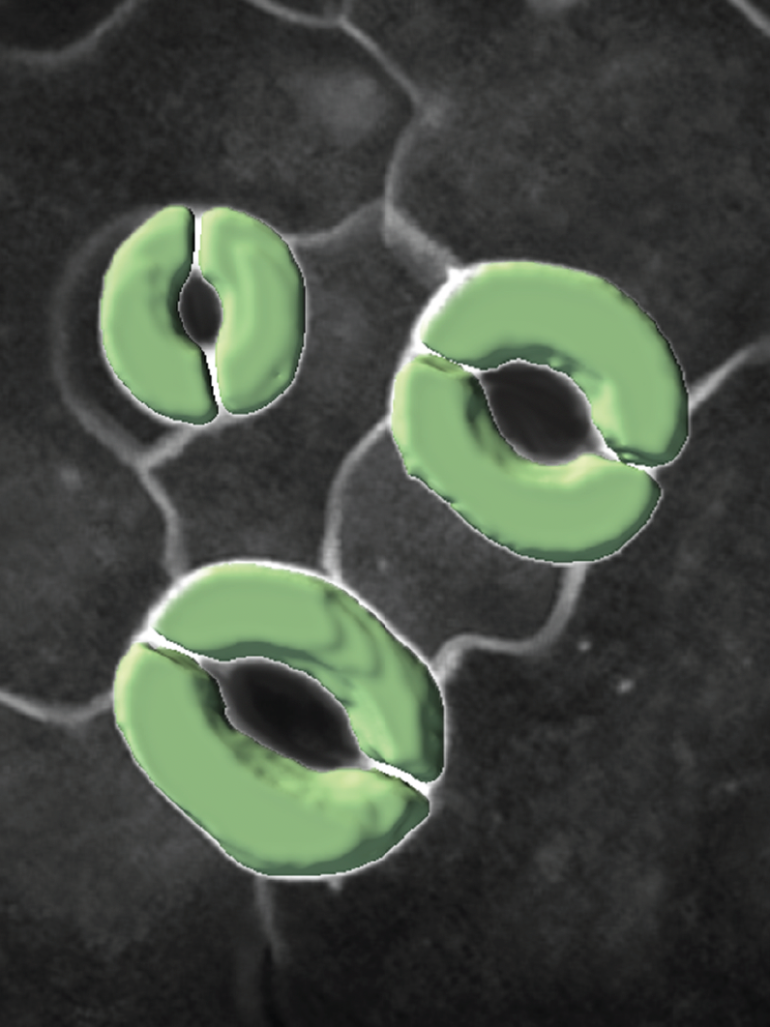 A new computational pipeline for analyzing three-dimensional imaging data can help biologists more accurately and quickly see how the cells in a plant’s leaves respond to the environment and identify plants that more efficiently use water, according to researchers.

A team of computer scientists and biologists from Penn State developed a 3D imaging model to study how tiny structures called stomatal guard cells, which are involved in plant photosynthesis and transpiration, interact with neighboring cells when undergoing physical changes.

The model is more efficient and accurate than existing methods of analyzing cellular geometry and mechanics, and the researchers found that the guard cells behaved in unexpected ways. The research will help biologists run experiments more efficiently and identify plants, including important agricultural crops, that can better adapt to a changing climate.

“Currently, it takes experts five to eight hours to manually label just the guard cells in a single 3D image set,” said Dolzodmaa Davaasuren, a doctoral candidate in Penn State’s College of Information Sciences and Technology who led development of the pipeline. “Our team wanted to automate processes so we could study more images.”

The researchers built and tested their pipeline using the model plant Arabidopsis thaliana, commonly known as thale cress. They used a specialized confocal microscope to take 3D images of guard cells on the leaves of the plant. Guard cells surround stomatal pores and regulate how much carbon dioxide and water vapor pass through the pores. The team collected images before and after ablating, or using a laser beam to poke holes in, neighboring cells that were touching guard cells to see how stomatal volume changed.

The scientists used the 3D U-Net segmentation model as a basis for their model, which they called 3D CellNet, and added an encoder that better preserves spatial information. They also added an attention module, which tells the model to focus on specific parts of the 3D image. In this case, they told the module to focus on the tiny guard cells. The researchers used just five manually labeled 3D images to train their model. Further image processing steps were taken in the pipeline to measure the shapes of the guard cells.

The team found that their new pipeline labeled images and measured cell volumes more quickly and accurately than trained cell biologists. They also found that 3D CellNet segmentation outperformed the base model on which it was built plus two additional 2D models. They reported their findings in the journal Patterns.

“From a computer science standpoint, this is the first time we’re able to use a machine trained with a limited number of labeled examples to achieve highly accurate 3D image segmentation in such a demanding situation,” said James Wang, distinguished professor of information sciences and technology and study co-author.

“If you think about medical imaging, even though they have similar 3D issues, they don’t have the challenge of looking deeper in a sample where the imaging becomes fuzzier because of light scattering. The deeper you go, the more light scattering you get, and how much light scattering is not well defined. It’s a technical challenge that we must deal with, and our research is one of the first steps to successfully tackle the problem.”

Using this new pipeline to segment and measure cell volume after ablation, the team found that the guard cells responded to external stimuli differently than expected. The researchers thought that guard cell volume would increase and cause the pores to open if they decreased the pressure beside the guard cells by ablating the flanking neighboring cells. Instead, the researchers observed little change.

However, when they ablated the neighboring cells at the top and bottom of each guard cell pair that are thought to prevent stomatal complex lengthening, thus forcing the guard cells apart when they expand and opening the stomatal pore, they found that guard cell volume measurably increased.

“The neighboring cells impose mechanical constraints on the guard cells, but they’re doing it in a way that was completely unexpected and might be somewhat independent of the water status of those neighboring cells,” said Charles Anderson, associate professor of biology and study co-author. “We’d like to investigate this further to understand what’s happening at the biomechanical level that allows plants to respond to drought by effectively closing their stomata and keeping them closed.

“One of the most exciting aspects of the paper is that it really is a tour de force in terms of computer science—developing a new algorithm that outperforms existing algorithms for measuring the 3D volumes of cells—and that it immediately applies that advance to help answer the important biological question of how stomatal pores, which power photosynthesis and water transport in plants, really work.”

Tools like 3D CellNet can help biologists better understand how guard cells and stomata react to external stimuli, which is important for addressing food security concerns in the face of a growing global population and climate change, Anderson said.