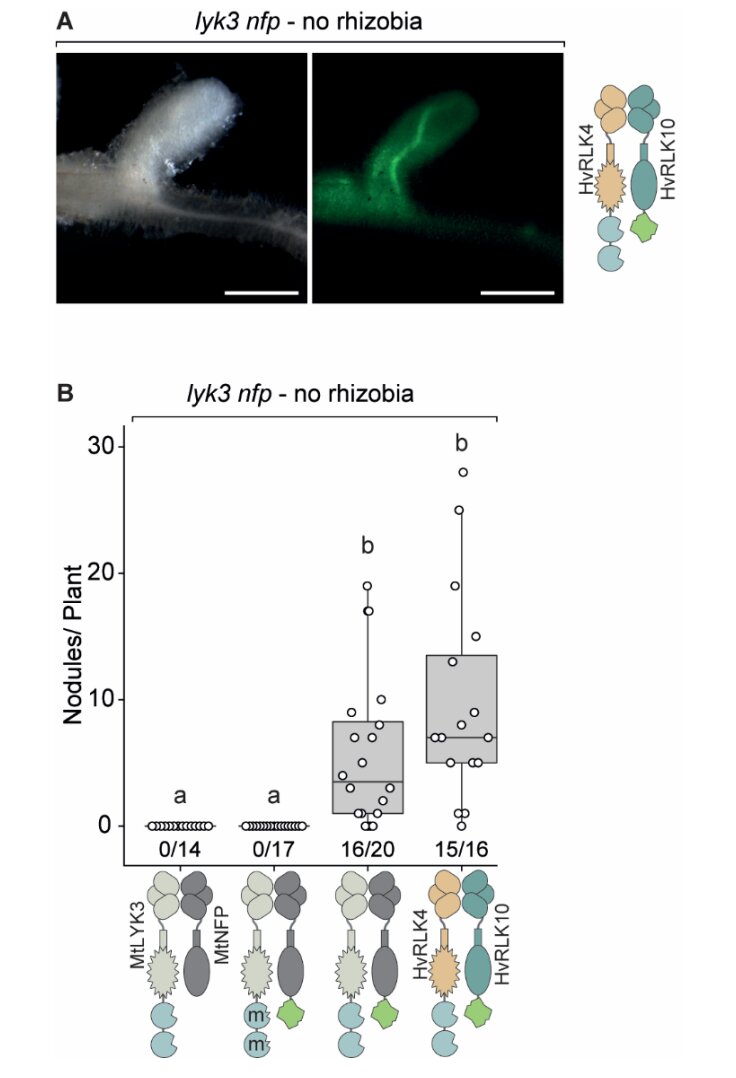 Legume plants do not depend on externally supplied nitrogen, because they can form a symbiosis with nitrogen-fixing bacteria, called rhizobia. The plants recognize the nitrogen-fixing bacteria and allow them to colonize specially formed organs called nodules. It has been known for many years that there are two Nod factor receptors, NFR1 and NFR5, which are responsible for recognizing the signaling molecules secreted by rhizobia. But how the receptors work together in signaling complexes was unknown until now.

“It is difficult to identify active signaling complexes in living cells, so we had to develop a new approach. For quite a while, we had been working with nanobodies, small single-domain antibodies derived from llamas, for other purposes. So, we wondered if we could use nanobodies to study receptor signaling,” Kasper Røjkjær Andersen explains.

The researchers from the Plant Molecular Biology section developed an approach where they coupled a green fluorescent protein (GFP) to one of the receptors and a nanobody that binds to GFP to the other receptor. This way, the two receptors were brought into close vicinity in the living plant.

“To our surprise, just bringing the receptors close together through nanobody binding was enough to initiate the formation of nodules. We also tested other receptors, but nothing happened, so that showed us that NFR1 and NFR5 must be forming a complex to start symbiotic signaling,” Henriette Rübsam explains.

In the long run, the researchers want to engineer root nodule symbiosis into cereals to decrease the use of nitrogen fertilizers, which have an enormous CO2 footprint, and to enable small-holder farmers with limited access to commercial fertilizer to have stable yields.

“We came up with the rather wild idea that existing barley receptors might be capable of initiating nodule formation in legumes,” Simona Radutoiu explains.

Christina Krönauer elaborates, “We tested the signaling capacity of barley receptors by pulling them together using nanobodies and could show that associating the two receptors RLK4 and RLK10 leads to nodule formation in lotus. This was completely unexpected and very promising, because it might be a major step on the way to engineer crop plants to engage in symbiosis with nitrogen-fixing bacteria.”

The paper is published in the journal Science.

The researchers are now looking forward to applying the new technique to study other important receptor systems. They are especially excited to explore and develop the prospects of engineering nitrogen-fixing cereals for a more sustainable agri-food system

Photos suggest rhino horns have shrunk over past century, likely due to hunting