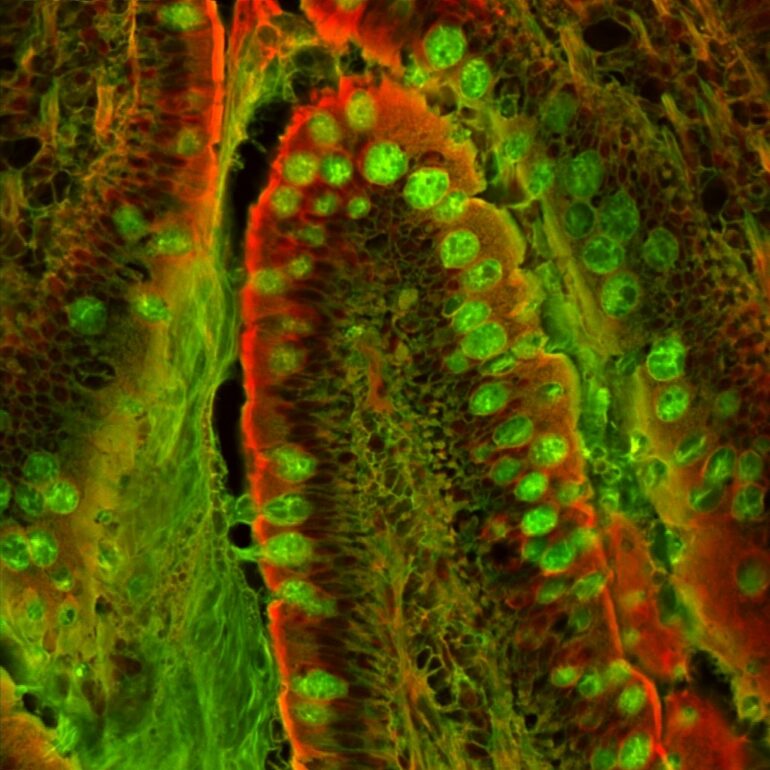 The ability to see invisible structures in our bodies, like the inner workings of cells, or the aggregation of proteins, depends on the quality of one’s microscope. Ever since the first optical microscopes were invented in the 17th century, scientists have pushed for new ways to see more things more clearly, at smaller scales and deeper depths.

Randy Bartels, professor in the Department of Electrical Engineering at Colorado State University, is one of those scientists. He and a team of researchers at CSU and Colorado School of Mines are on a quest to invent some of the world’s most powerful light microscopes—ones that can resolve large swaths of biological material in unimaginable detail.

The name of the game is super–resolution microscopy, which is any optical imaging technique that can resolve things smaller than half the wavelength of light. The discipline was the subject of the 2014 Nobel Prize in Chemistry, and Bartels and others are in a race to keep circumventing that diffraction limit to illuminate biologically important structures inside the body.

Bartels, together with Jeff Squier, a professor of physics at Colorado School of Mines, have theorized a new super–resolution technique that uniquely fuses quantum and classical information derived from light to drastically improve imaging resolution. The math and physics behind their idea, and why they think it will work, is detailed in the journal Intelligent Computing. The paper includes Jeff Field, former director of CSU’s Center for Imaging and Surface Science, as co-author.

Their new computational imaging method works by precisely counting the arrival of photons, or quantum particles of light, emitted from a biological sample. The photons are excited by laser pulses, and by counting them one by one with detectors, a set of quantum and classical images emerge. The researchers then apply an algorithm to produce images that resolve the details of small structures, like cells, over large regions.

“Right now, people can do very high-resolution optical imaging, but it’s kind of like flying over the Rocky Mountains and being able to see all the trees, but not the fine details of the trees,” explained Bartels. Other super–resolution techniques exist that allow someone to zoom way in, say, on an individual leaf, he continued. But to look in fine detail across an entire forest is what Bartels and the team are going for.

“The idea here is to illuminate a large region of many cells, at high resolution, high speed, and across a high volume,” Bartels said.

Bartels has worked with Mines’ Squier for several years. Their research partnership combines Bartels’ expertise in computation with Squier’s expertise in optical engineering, creating custom optics for their shared goals.

“While our paper represents a fusion of classical and quantum physics, it is fair to say it also represents a fusion of ideas from both Mines and CSU,” Squier said. “The fundamental ideas in the paper simply would not have manifested without the close collaboration that has been built up over the past several years by our groups.”