Plants reprogram their cells to fight invaders. Here’s how 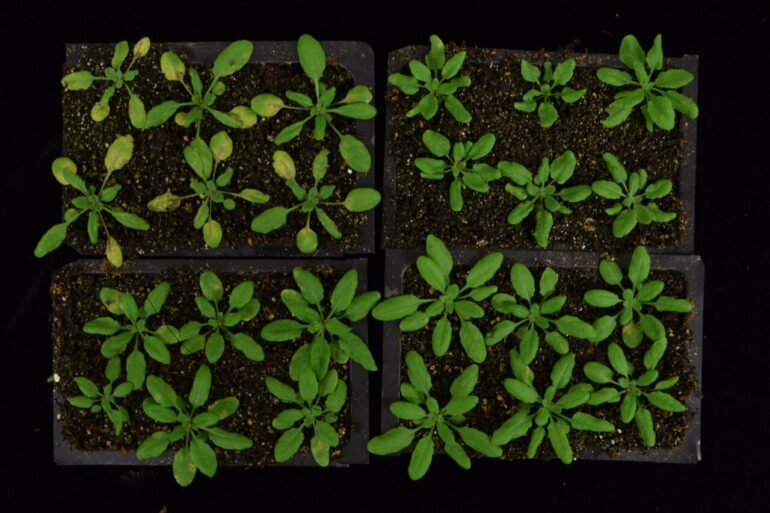 In times of war, factories retool to support the needs of battle. Assembly lines change course from turning out car parts to machine guns, or from building washing machines to aircraft engines.

To hear Duke University professor Xinnian Dong tell it, plants can shift from peacetime to wartime production too.

Crops and other plants are often under attack from bacteria, viruses, and other pathogens. When a plant senses a microbial invasion, it makes radical changes in the chemical soup of proteins—the workhorse molecules of life—inside its cells.

In recent years, Dong and her team have been piecing together just how they do it. In a new study published in the journal Cell, Dong and first author Jinlong Wang reveal the key components in plant cells that reprogram their protein-making machinery to fight disease.

Each year, around 15% of crop yield is lost to bacterial and fungal diseases, costing the global economy some $220 billion. Plants rely on their immune system to help them fight back, Dong said.

Unlike animals, plants don’t have specialized immune cells that can travel through the bloodstream to the site of infection; every cell in the plant has to be able to stand and fight to defend itself, quickly shifting into battle mode.

When plants come under attack, they shift their priorities from growth to defense, so cells start synthesizing new proteins and suppress production of others. Then “within two to three hours things return to normal,” Dong said.

The tens of thousands of proteins made in cells do many jobs: catalyzing reactions, serving as chemical messengers, recognizing foreign substances, moving materials in and out. To build a specific protein, genetic instructions in the DNA packed inside the cell’s nucleus are transcribed into a messenger molecule called mRNA. This strand of mRNA then heads out into the cytoplasm, where a structure called a ribosome “reads” the message and translates it into a protein.

In a 2017 study, Dong and her team found that when a plant is infected, certain mRNA molecules are translated into proteins faster than others. What these mRNA molecules have in common, the researchers discovered, is a region at the front end of the RNA strand with recurring letters in its genetic code, where the nucleotide bases adenine and guanine repeat themselves over and over again.

In the new study, Dong, Wang and colleagues show how this region works with other structures inside the cell to activate “wartime” protein production.

They showed that when plants detect a pathogen attack, the molecular signposts that signal the usual starting point for ribosomes to land on and read the mRNA are removed, which keeps the cell from making its typical “peacetime” proteins.

Instead, ribosomes bypass the usual starting point for translation, using the region of recurring As and Gs within the RNA molecule for docking and start reading from there instead.

For plants, fighting infection is a balancing act, Dong said. Allocating more resources to defense means less is available for photosynthesis and other activities in the business of life. Producing too many defense proteins can create collateral damage: plants with an over-active immune system suffer stunted growth.

Dong’s team did the bulk of their experiments in a mustard-like plant called Arabidopsis thaliana. But similar mRNA sequences have been found in other organisms, including fruit flies, mice and humans, so they may play a broader role in controlling protein synthesis in plants and animals alike, Dong said.