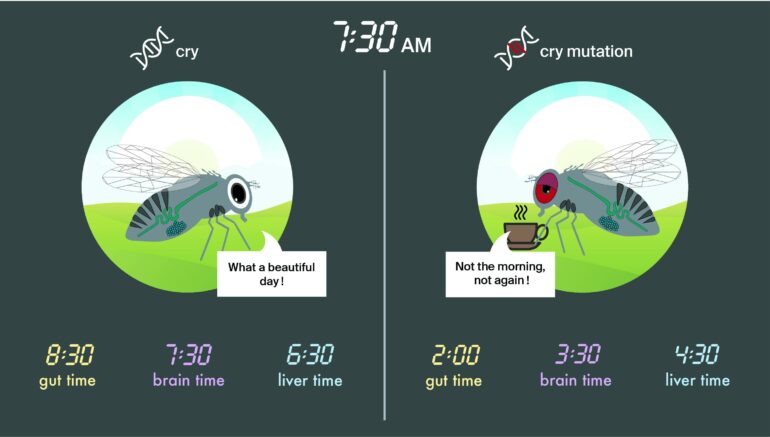 The higher the temperatures, the faster physiological processes are. But there is an exception: the so-called circadian clock, which regulates the sleep-wake cycle in organisms. A fascinating question for scientists is why the inner clock runs in an almost unchanging way despite fluctuations in temperatures. This is a phenomenon known as temperature compensation. Studies indicate that different molecular mechanisms contribute to this.

A team of biologists headed by Prof. Ralf Stanewsky from the University of Münster (Germany), and in collaboration with teams at Dalhousie University in Canada and the University of Mainz in Germany, have now found an important piece in the puzzle providing an answer to this question. The results of their work have been published in the journal Current Biology.

The team discovered a point mutation in the fruit fly Drosophila melanogaster which leads to a temperature-dependent lengthening of circadian clock periods. It is located in a central “clock gene” known as a “period” (per). Flies which have this perI530A mutation display a normal sleep-wake rhythm of 24 hours at 18 degrees Celsius. In contrast, at 29 degrees Celsius the inner clock runs about five hours slower, i.e. it lasts 29 hours. This lengthening of periods also affects the expression, in other words the activity, of the period gene in the clock neurons of the brain.

Normally, the protein concerned (PERIOD) is gradually changed chemically in the course of 24 hours—specifically, it is phosphorylated. After maximum phosphorylation it is degraded. Here, too, this process is normally the same at temperatures between 18 and 29 degrees Celsius, at which fruit flies are active. As the researchers showed, phosphorylation occurs in a normal way in the perI530A mutant at 18 degrees Celsius but decreases as the temperature increases. This leads to a stabilization of the “PERIOD” protein at warmer temperatures.

The mutation studied by the team affects a so-called nuclear export signal (NES), which also occurs in this form in the period genes of mammals and plays a role in transporting the PERIOD proteins out of the cell nucleus. No biological function of this export from the cell nucleus had previously been known of. The current study shows that the mutation leads to an extended retention of the PERIOD protein in the cell nucleus of central clock neurons—and again, only at higher temperatures. “We therefore assume,” says Ralf Stanewsky, “that the export of the protein from the cell nucleus plays an important role in temperature compensation—at least as far as the fruit fly is concerned.”

In their investigations, the scientists used fruit fly mutants with a modification in the period gene (perI530A) which they had produced using modern molecular genetics methods (CRISPR/Cas9 mutagenesis and homologous recombination). These animals were then tested to see whether their sleep-wake cycle—and, as a result, their running activity—differed, depending on the ambient temperature.

Using a variety of methods, the researchers visualized the clock genes and their activity in the brain neurons. One of the things they used was a new method called Locally Activatable BioLuminescence (LABL) which the Münster team had developed in collaboration with researchers in Canada. This method involving bioluminescence makes it possible to measure, in living flies, the rhythmic gene expression in clock neurons—which only make up a fraction of all brain neurons.

Trilobites’ growth may have resembled that of modern marine crustaceans

Provided by
University of Münster