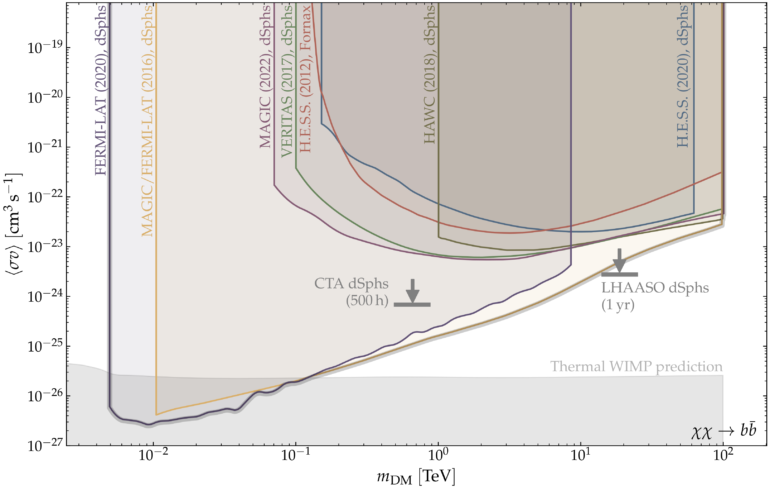 Scientists from the Large High Altitude Air Shower Observatory (LHAASO) have presented roughly 1.5 years of observational data, calculating new limits on the lifetime of heavy dark matter particles that have masses between 105 and 109 giga-electron volts.

The gravitational model of the Milky Way shows that there is a very high density of dark matter in the galactic center, and the gamma rays produced by the decay of this dark matter will radiate from the galactic center to the surroundings for hundreds of light-years or even thousands of light-years. However, for a long time, the observation of ultra-high-energy gamma rays produced by heavy dark matter has been complicated by the presence of other background radiation.

Thanks to its unprecedentedly high detection sensitivity to ultra-high-energy gamma rays (>100 TeV), LHAASO has the very unique potential to observe gamma rays decaying from heavy dark matter. LHAASO can eliminate background events by nearly six orders of magnitude above 100 TeV, which significantly reduces background interference and improves the ability to capture gamma rays.

By using data from the KM2A subarray of LHAASO, scientists measured the intensity of ultra-high-energy gamma rays beyond the galactic plane and place some of the strongest limit so far for the lifetime of heavy dark matter. The limit is nearly 10 times higher than previous results. This study shows that PeV mass dark matter has a lifetime of at least about billion trillion years (1021 years).

LHAASO’s observations of gamma rays are highly complementary to other experiments in the search for dark matter (such as neutrino observation experiments). As the LHAASO full array operates stably and gradually accumulates data, this limit will be further increased.