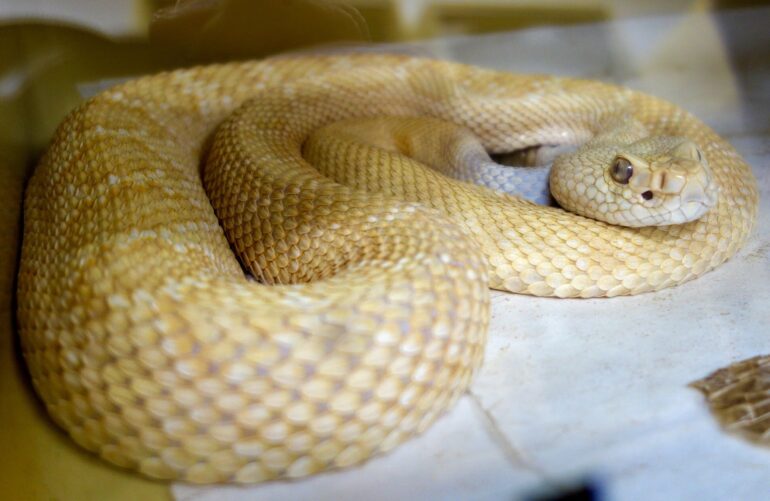 Venomous snakes cause an estimated 120,000 deaths and 400,000 disabling injuries worldwide each year, with approximately 8,000 snake bite cases in the United States alone.

To reduce and mitigate the severity of venomous snake bites, a team of University of Maryland biologists launched an investigation into the genome of the western diamondback rattlesnake (Crotalus atrox), a species with more venom toxins encoded in its genome than any other known rattlesnake. The team pinpointed a single protein—called FETUA-3—that inhibits a broad spectrum of rattlesnake venom toxins.

Published in the Proceedings of the National Academy of Sciences, the team’s findings have notable implications for the development of improved snake bite treatments.

“A good snakebite treatment needs to be able to counteract the venoms of more than just one species of snake,” said the study’s senior author Sean Carroll, a Distinguished University Professor of Biology at UMD and vice president for science education at the Howard Hughes Medical Institute (HHMI).

“FETUA-3 inhibited a huge number of toxins—over 20—that we detected and even bound to and inhibited the toxins of venoms from several other rattlesnakes we tested. We’ll need to learn more about how broadly FETUA-3 can be applied or if it’ll need some additional tinkering but knowing that this one protein can neutralize an entire class of toxins brings researchers even closer to creating a better anti-venom.”

According to Carroll, the team’s research began with a simple yet intriguing enigma that has long eluded researchers: how and why are poisonous snakes resistant to their own venom?

“It’s like a constant, three-way biological arms race where each side is always innovating to conquer the other,” explained Carroll, who is also the Andrew and Mary Balo and Nicholas and Susan Simon Endowed Chair at UMD.

“To survive a venomous snake bite, prey have to evolve resistance to the venom. If the prey become a little resistant, then the snakes have to adjust with a better venom. But snakes have also been able to protect themselves from their own evolving venom during their arms race against prey—our goal was to figure out exactly how.”

Most snake venoms carry an arsenal of dangerous toxins that facilitates the paralysis, killing and digestion of prey. One of the core components in rattlesnake venom is a class of molecules called metalloproteinases, which prevent blood clots from forming, break down tissue and ultimately cause hemorrhage. To protect themselves from these toxins, both snakes and their prey rely on special proteins encoded within their genomes that stymie the venom’s debilitating effects.

The researchers investigated a family of five proteins generally attributed to venom resistance. Unexpectedly, only a single member of the protein family had most of the venom-counteracting activity—FETUA-3—binding nearly all the toxins in the western diamondback’s venom. It also bound to and inhibited the toxins of venoms from several other rattlesnakes.

After tracing the evolutionary origins of FETUA-3, the researchers were surprised to find that while FETUA-3 was present in the western diamondback rattlesnake’s closest Asian and South American relatives, a different protein from the same family was responsible for protecting them against venom toxins.

In other words, the rattlesnakes developed their resistance through two separate genetic events. The discovery suggests that a major evolutionary shift occurred somewhere in the species’ evolutionary timeline, causing the family of inhibitors to expand and diversify throughout the Crotalus lineage.

Dinosaurs and amber: A new window to the Cretaceous world from 110 million years ago

With this new knowledge, the team gained insight into how ecological situations drive innovation and “arms races” in animals like rattlesnakes and their prey. They hope their findings will help researchers learn more about how FETUA-3 and other evolving toxin-blocking proteins may serve as ingredients for more effective snake bite treatments.

“Many current treatments using antiquated technologies and anti-venoms have drawbacks, including variation in or lack of potency, impurities that trigger side effects, and manufacturing inconsistency,” said the study’s lead author Fiona Ukken, a visiting faculty specialist in UMD’s Department of Biology and HHMI. “But by improving our understanding of the molecular basis of venom inhibition, we can help create novel and more effective therapeutic treatments.”