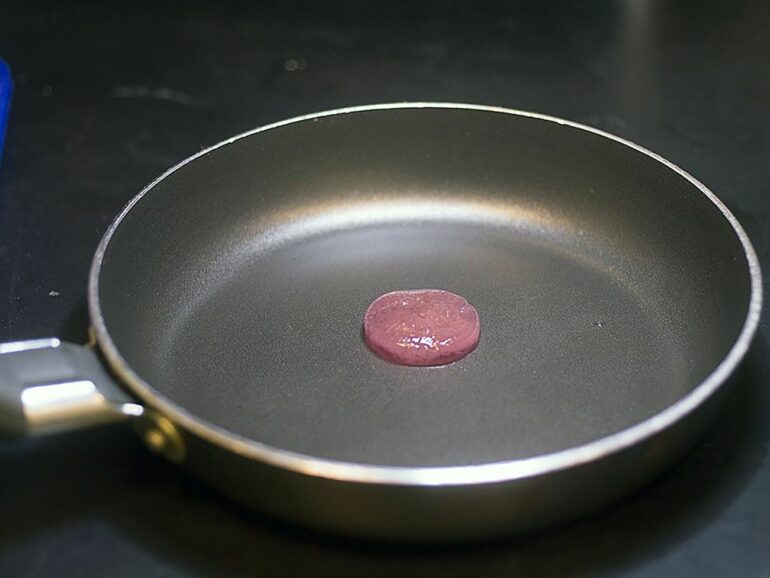 Researchers at UCLA have created an edible particle that helps make lab-grown meat, known as cultured meat, with more natural muscle-like texture using a process that could be scaled up for mass production.

Led by Amy Rowat, who holds UCLA’s Marcie H. Rothman Presidential Chair of Food Studies, the researchers have invented edible particles called microcarriers with customized structures and textures that help precursor muscle cells grow quickly and form muscle-like tissues. Edible microcarriers could reduce the expense, time, and waste required to produce cultured meat with a texture that appeals to consumers. The results are published in the journal Biomaterials.

“Animal cells that can be coaxed to form tissues similar to meats could offer a protein source to a world facing food insecurity caused by threats ranging from epidemics to natural disasters,” said Rowat, who is an associate professor of integrative biology and physiology at the UCLA College. “Cultured meat products are not yet on the market in the U.S. and strategies to enable mass production are still emerging.”

Mass production of cultured meat will involve surmounting several challenges. Current methods can produce a cultured steak that mimics the structure of T-bone, but not at the volume needed for food production. In an animal’s body, the muscle cells most commonly eaten as food grow on a structure called the extracellular matrix, which determines the shape of the mature tissue. Animal tissue can be grown in a lab using scaffolds made from collagen, soy protein or another material to replace the extracellular matrix. This process, necessary to produce whole tissues resembling steaks or chops, is labor intensive and takes weeks, making it hard to scale up for industrial production. It takes about 100 billion muscle cells to produce a single kilogram, or 2.2 pounds, of cultured meat.

Growing larger volumes of cultured meat at a faster pace involves making a paste or slurry of cells in a container called a bioreactor. Unfortunately, without a stiff substrate, meat grown this way lacks the muscle-like structure and therefore, texture and consistency, of what people are used to eating.

Current types of microcarriers can be used to provide a scaffold for cells to attach to, and to organize suspension-grown tissues, but they’re inedible and must be removed from the meat before consumption.

UCLA’s microcarriers can be eaten along with the cultured meat they help grow. The structure and texture of microcarriers could be tuned to speed up the growth of muscle tissue and to optimize meat texture, Rowat said. The edible microcarriers also supported growth of bovine muscle cells and yielded beef that browned nicely when cooked.

Rowat and her UCLA lab of students and postdoctoral scholars Sam Norris, Stephanie Kawecki, Ashton Davis and Kathleen Chen, adapted established water-in-oil emulsion techniques to produce edible particles. They used food ingredients including gelatin and transglutaminase, an enzyme that occurs naturally in meat and mass-produced by bacteria for use as a binding agent in many food products. This helped them create microcarriers of varying stiffness and stabilize the gelatin. To customize the microcarrier surface texture for cell attachment and growth, they devised a way to emboss grooves onto the particles.

The group seeded the microcarriers with mouse precursor muscle cells for an initial test run. They compared the embossed microcarriers to ones with a smooth surface. As a control, they seeded conventional inedible microcarriers with the same type of cells in a separate flask of growth medium. After eight days the cells had formed small clumps. There was no significant difference in the size of clumps on embossed and smooth microcarriers, although cells on the embossed carriers had an initially faster growth spurt.

“We were excited to see a trend toward quicker growth of muscle cells cultured on the grooved microcarriers,” said Kawecki, the study’s co-author who is one of Rowat’s doctoral students. “Any time reduction of cell culture time can significantly reduce the cost of cultured meat production, especially when these processes are brought to scale.”

The internal structure of the tissue grown on edible microcarriers looked more like natural muscle tissue than that grown on inedible carriers, suggesting that the edible microcarriers encouraged more natural growth. Norris, who is a postdoctoral scholar, was surprised to find that cells and microcarriers spontaneously combined to form microtissues that contained a significant amount of myotubes, which are precursors to muscle fibers.

Next, they seeded fresh edible microcarriers with bovine cells and achieved similar results.

“The fact that we can grow large amounts of protein-rich muscle tissue in a stirred bioreactor is a major step in upscaling the production of true cultured meat,” Norris said.

To harvest the tissues, a centrifuge separated the cell clumps from the growth medium. They were rinsed to remove traces of growth medium, compressed into a disk two centimeters, or about 3/4 inch, in diameter, and cooked in a frying pan with olive oil. The cooked patty had the rough, brown surface texture and overall appearance of a tiny hamburger patty.

The researchers said that the microcarrier manufacturing process could be used to produce large amounts of meat quickly and cheaply. Meat of different textures could be produced by manipulating microcarrier stiffness and texture.

The edible microcarriers don’t have to be made with gelatin. Plant-based gels, such as agar-agar or animal-free gelatin, could be used, Rowat said.