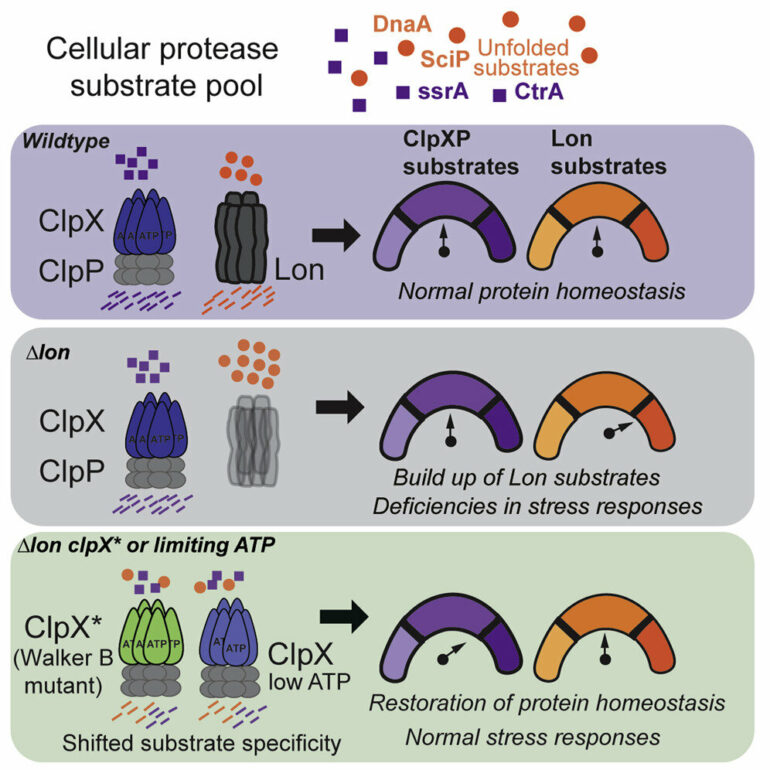 In new research recently published in the journal Cell Reports, a team of scientists from the University of Massachusetts Amherst delved into the mysteries of how cells weather stress. Using bacterial cells, the researchers discovered that a damage-repairing enzyme, called ClpX, can not only mutate to fix multiple cellular issues but can respond to changing levels of cellular energy to help keep a cell healthy.

“What we’re really interested in,” says Peter Chien, professor of biochemistry and molecular biology at UMass Amherst and the paper’s senior author, “is how cells respond to stress. We study a class of enzymes, called proteases, which target and destroy harmful proteins within a cell. These proteases can selectively recognize specific, individual proteins singular proteins. But how do they do this? How can they choose between healthy proteins and harmful ones?”

To answer this question, Chien and his co-authors focused on two specific proteases, known as Lon and ClpX, each of which is exquisitely tuned to recognize a different harmful protein. It had long been thought that Lon and ClpX functioned like keys: Each could open only a specific lock and no other, and if a cell lacked either, then serious side effects would occur.

“If you’ve ever had an extremely messy college roommate,” says Chien, “you know how important it is to empty the trash regularly. Missing the Lon protease is like having a roommate who never washes, changes or cleans.”

But, after a series of experiments that involved deleting Lon from colonies of bacterial cells, Chien’s team started noticing something odd: Some of the colonies were surviving.

This observation led to their first discovery: ClpX can mutate to perform a Lon-like function, though it loses some of its ClpX abilities. It’s as if in order to keep your dorm-room clean, you started washing your roommate’s socks, but had to sacrifice some of your own clean laundry in order to do so.

In tracing out exactly how the ClpX mutation allowed the protease to expand its function, the team made its second discovery: Wild, non-mutant ClpX can also perform some of Lon’s duties, under the right conditions.

It turns out that ClpX is highly sensitive to ATP, an organic compound that is the energy source for all living cells. At normal levels of ATP, ClpX focuses on its own duties, but at a specific, lower threshold it suddenly starts cleaning up after Lon.

“This is a real breakthrough in the basic understanding of how cells work,” says Chien. “It changes the rules: Not only does cellular energy control how fast a cell works, but how it works, as well.”