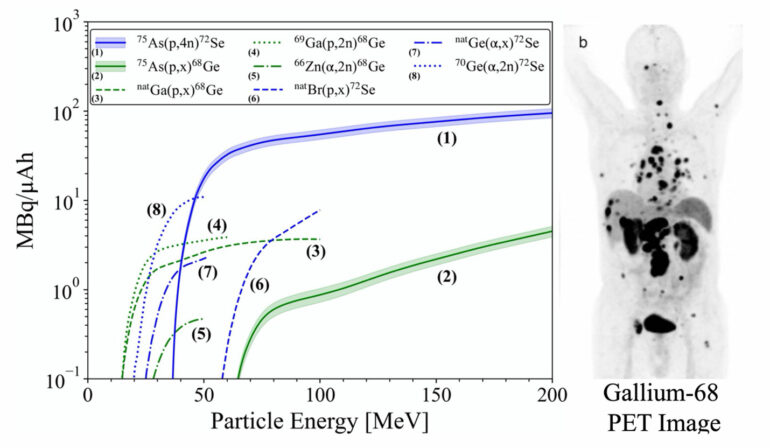 Most mass in everyday matter around us resides in protons and neutrons inside the atomic nucleus. However, the lifetime of a free neutron—one not bounded to a nucleus—is unstable, decaying by a process called beta decay. For neutrons, beta decay involves the emission of a proton, an electron, and an anti-neutrino. Beta decay is a common process.

The discovery of an exotic near-threshold resonance that favors proton decay is a key for explaining the beta-delayed proton decay of 11Be. The discovery is also a remarkable and not fully understood manifestation of quantum many-body physics. Many-body physics involves interacting subatomic particles. While scientists may know the physics that apply to each particle, the complete system can be too complex to understand.

The observation of a near-threshold resonance in 11B is key in explaining the large value of the beta-delayed proton decay of 11Be. The results point to a two-step process and away from more exotic explanations such as a dark matter decay channel. Understanding this state helps scientists narrow down theories of unstable nuclear systems. It also raises questions about the nature of this decay process including physics beyond the standard model.

Since 11Be is a radioactive neutron-rich nuclei, nuclear physicists did not expect it to decay via proton radioactivity. The large value observed for the beta-delayed proton decay in 11Be prompted speculations on the nature of the decay including exotic processes outside the standard model. An alternative explanation needed the existence of an unobserved, very narrow resonance in 11B.

Physicists at the John D. Fox Accelerator Laboratory at Florida State University, using a radioactive 10Be beam in a measurement of the 10Be(d,n) reaction, observed a narrow proton-decaying resonance in 11B. This result supports evidence that the beta-delayed proton decay of 11Be is actually a sequential two-step process where a near-threshold resonance in 11B is populated first in a beta decay with a subsequent proton emission. The position of the resonance and its decay properties is a unique case highlighting complex quantum many-body physics of unstable systems.

Provided by
US Department of Energy