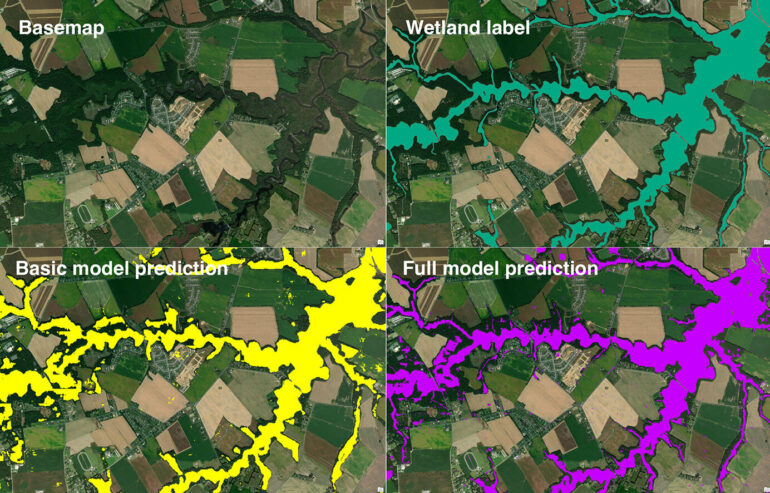 Chesapeake Conservancy’s data science team developed an artificial intelligence deep learning model for mapping wetlands, which resulted in 94% accuracy. Supported by EPRI, an independent, non-profit energy research and development institute; Lincoln Electric System; and the Grayce B. Kerr Fund, Inc., this method for wetland mapping could deliver important outcomes for protecting and conserving wetlands. The results are published in the peer-reviewed journal Science of the Total Environment.

“We’re happy to support this exciting project as it explores new methods for wetlands delineation using satellite imagery,” said EPRI Principal Technical Leader Dr. Nalini Rao. “It has the potential to save natural resource managers time in the field by using a GIS tool right from their desks. Plus, it can help companies and the public manage impacts to wetlands as infrastructure builds are planned to meet decarbonization targets.”

“The Infrastructure Investment and Jobs Act is pouring hundreds of billions of dollars into projects that will have an impact on the landscape. However, the data that we rely on to minimize impacts to wetlands is distressingly outdated,” said Environmental Policy Innovation Center’s Restoration Economy Center Director Becca Madsen, a former EPRI researcher. “There has never been a better time to invest in updating our nation’s wetland data and establishing a sustainable and cost-effective process for keeping them updated.”

“When this highly accurate model is scaled up to predict wetlands in much bigger geography such as the Chesapeake Bay or the contiguous United States, this will be a game changer. It obviates the need for manual mapping of wetlands as well as mapping wetlands with traditional machine learning which require a lot of data processing, curation and manual feature engineering, both of which are time-consuming, labor intensive and very expensive,” said Chesapeake Conservancy’s Data Science Lead/Senior Data Scientist Dr. Kumar Mainali.

What this means for protecting and conserving wetlands

The product of the model is a map of wetland probability. This probability data may be used to map the most likely wetland extent, but if users prefer, they can map wetland extent with a lower probability threshold. The resulting map limits the likelihood of wetland omission even though it maps more wetlands than are present in reality.

There could also be potential to use this model to map locations where wetlands have already been lost since they were mapped with NWI. Additionally, potential locations for wetland restoration could also be identified. For example, persistently wet agricultural fields are picked up by the model even though for the purposes of field wetland delineation, these areas are not considered wetlands when actively farmed.

The team will expand the model to states or larger regions and continue to train the model on varied geographies.

Following the initial model development, the model was extended to include Lancaster County, Nebraska. Modeling wetlands in this region proved challenging because the NWI data for the area was decades out of date, and included wetlands in several areas where they had been lost to development. The team was interested to learn whether the model could succeed in mapping wetlands where no recent high-quality wetlands datasets were available to train the model.

The wetland model was trained with the decades-old NWI dataset and recent satellite and aerial imagery data. The team found that the NWI data improved the local accuracy of wetland mapping by 10% compared to predictions before training, showing the importance of using local training data in new geographies.

In addition, the model correctly omitted wetlands where they had been lost to development, despite these wetlands remaining in the outdated training data, as shown in the image below (outdated training data shown in green; model prediction in purple, overlaid over recent satellite imagery). The performance of the model in determining the dominant pattern in the data to both improve local mapping accuracy but still accurately reflect wetland presence and absence is promising for the usefulness of this approach.

Despite the important role of wetlands data for planning infrastructure projects and managing wildlife, NWI wetlands data have not been comprehensively updated for many years. As shown in the map below, much NWI data across the nation dates to the 1970s and 1980s, yet remains the best available data. A modeling approach to wetland mapping that can utilize training data of varying vintages will be incredibly useful in modernizing wetland mapping where it is most needed.

The “predictor” layers used in wetland training from which the model learns the patterns found in wetlands were: USDA National Agriculture Imagery Program (NAIP) aerial imagery (1m), Sentinel-2 optical satellite imagery (10-20m), LiDAR-derived geomorphons, an approach to mapping landforms that Chesapeake Conservancy has been applying to advance high-resolution stream mapping; and LiDAR intensity, an index that is frequently used to identify water and persistently wet soils.

Additionally, the team trained a simpler model using only USDA NAIP and Sentinel-2 data as the input layers, securing an accuracy of 91.6%.