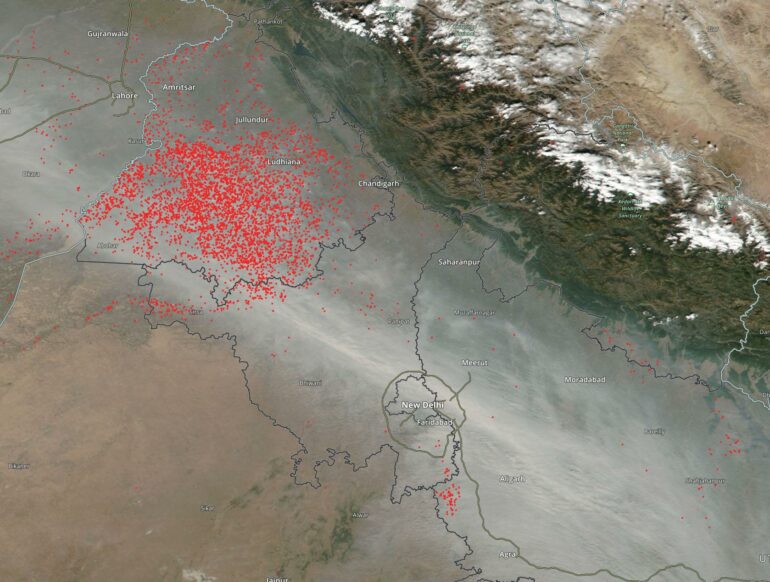 New research from Harvard University finds that a government policy that delayed rice planting in northwest India may have had an unintended consequence for air quality in the region. The policy, which was first adopted in 2008, required farmers to push back the sowing of rice to take advantage of monsoon rains and decrease the reliance on groundwater-fed irrigation systems.

As a result, farmers in northwest India began to increasingly rely on fire to quickly clear fields in preparation for the next planting season. The seemingly small shift in the planting season had a cascading effect that delayed the fire season by about two weeks and exacerbated air pollution in northern India, including in the megacity of New Delhi and in the cities of Bathinda (Punjab) and Jind (Haryana).

The research was published in Journal of Geophysical Research: Atmospheres.

The research was a collaboration between Harvard, the Jet Propulsion Laboratory, Environmental Defense Fund, the University of Michigan, the Public Health Foundation of India, International Maize and Wheat Improvement Center, Columbia University, and the University of California, Los Angeles.

Over the past decade, researchers had linked an increase in post-monsoon smoke and smog in northern India—visible from satellite images—partly to agricultural burning, but how the change in the timing of fires in northwest India affects regional air quality had been less explored.

“We know that the number and intensity of agricultural fires in northwest India have been growing, but this trend can be attributed to many factors, including higher crop yield and production and shorter harvest-to-sowing windows due to the groundwater policy,” said Tianjia (Tina) Liu, a former graduate student at the Harvard Graduate School of Arts and Sciences and first author of the study.

“The delay in the burning of rice residues is more directly linked to the policy that pushed back the planting season. Our research isolates this effect on air quality and shows that the change in timing alone increased smoke air pollution in urban and rural areas downwind of the fires. The impact of fires on air quality is even greater if we consider that the delays in rice planting and harvests further incentivize the use of fire.”

Liu is currently a National Oceanic and Atmospheric Administration Climate & Global Change postdoctoral fellow at the University of California, Irvine.

“While several research teams have found that the groundwater policy is associated with a two-week delay in the peak of agricultural burning, this paper is an important contribution as it quantifies how this delay compounds the air pollution burden from smoke,” said Meghna Agarwala, Assistant Professor at Ashoka University in New Delhi, who was not involved in the research.

The researchers explored the connection between the shift in planting and increased pollution by modeling the transport of smoke from agricultural fires in the region—which relies on data from satellites and household surveys—from 2008 to 2019, after the policy was enacted.

The research team was then able to model what happens when the fire season is delayed due to later planting and harvesting and importantly, what air quality would be like if there hadn’t been any delays.

The researchers found that without the delay in planting, cities close to and downwind of the fires, including New Delhi, would have seen on average 11 to 21 percent less smoke-related air pollution between 2008 and 2019.

Meteorology drives the increase in pollution attributed to the fire season delays. Weaker ventilation in early November, compared to late October, means that more pollutants get trapped near the surface during fire season.

“The large cities like New Delhi in northern India already experience terrible air pollution due to urban sources like cars and industry,” said Loretta J. Mickley, senior author of the study and Senior Research Fellow in the John A. Paulson School of Engineering and Applied Sciences (SEAS). “Our work shows that smoke from rural fires exacerbates the poor air quality in these cities, and that the smoke impact has increased in recent years.”

Researchers also identified areas within Punjab where groundwater usage and decline are relatively low but have seen larger delays in the fire season. This suggests that the one-size-fits-all, statewide groundwater policy could be more targeted at the district level to maximize co-benefits for groundwater and air quality.

“Our research suggests that a more localized policy, one which allows districts that use less groundwater for irrigation, such as those in western Punjab, to plant rice earlier may help alleviate the air pollution caused by agricultural burning,” said Liu.

“We have shown that the groundwater and air quality crises are major regional issues and are interconnected,” said co-author Balwinder-Singh, former Cropping System Scientist at the International Maize and Wheat Improvement Center (CIMMYT) in New Delhi. “But there is still a path to clearer skies and safer water practices. Local solutions include planting rice varieties that either grow more quickly or need less water. Promoting less water-demanding crops like maize would be helpful in zones with severe groundwater depletion.”