Indigenous territories and protected areas are key to forest conservation in the Brazilian Amazon, study shows 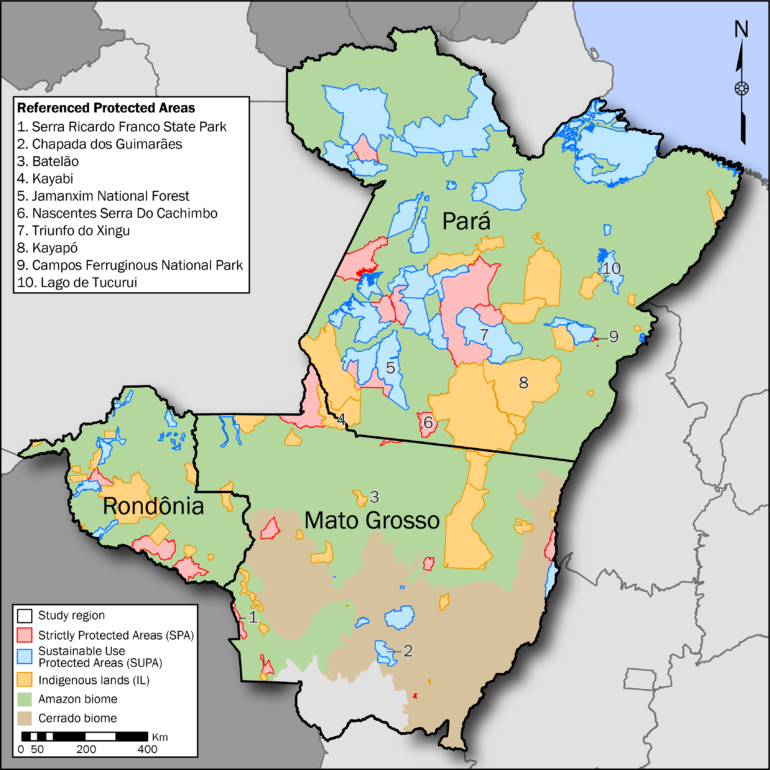 A study led by researchers with the Center for Earth Observation and Modeling at the University of Oklahoma analyzed time series satellite images from 2000 to 2021, revealing the vital role of Indigenous territories and protected areas in forest conservation in the Brazilian Amazon. The study results, recently published in Nature Sustainability, called attention to the negative impacts of weakened governmental conservation policies in recent years.

The Brazilian Amazon encompasses the largest tropical forest area with the highest biodiversity in the world. Since 2000, Indigenous territories and protected areas have increased substantially in the region and by 2013, Indigenous territories and protected areas accounted for 43% of the total land area and covered approximately 50% of the total forest area.

However, tensions between forest conservation and socioeconomic development goals persist. In recent years, forest conservation has been threatened by large socio-ecological changes in Brazil. Weakened forest and environmental policies and enforcement as well as impacts from the COVID-19 pandemic had devastating impacts on Indigenous groups in the region.

In this U.S.–Brazil collaborative study, Yuanwei Qin, Ph.D., and Xiangming Xiao, Ph.D., of OU’s Center for Earth Observation and Modeling, with Fabio de Sa e Silva, Ph.D., assistant professor of international studies and Wick Cary Professor of Brazilian Studies in the OU College of International Studies, worked with collaborators from the Brazilian National Institute for Space Research and the National Institute for Research in Amazonia in Brazil. The research team combined multiple data sources to document and quantify the dynamics and impact of forest loss in the Brazilian Amazon over the past two decades.

“Between 2000 and 2021, the areas designated as Indigenous territories or protected areas increased to cover approximately 52% of forests in the Brazilian Amazon, accounting for only 5% of net forest loss and 12% of gross forest loss in the period,” said Qin. “This finding highlights the vital role of Indigenous territories and the protected areas for forest conservation in the region.”

“These varying effects on forest conservation call for more in-depth causal analyses by researchers and invite stakeholders, decision-makers, and the public to reassess existing policies for these areas. Legal designations are important, but if the law is not enforced, the intended protection of forests and biodiversity will be illusional. This is an area in which Brazil is knowingly failing,” de Sa e Silva said.

“How to rebuild effective policies and reduce forest area loss in the Brazilian Amazon in the coming years will be one of the grand challenges for Lula’s administration and international communities,” Xiao said.

Think storms are getting worse? Rapid rain bursts in Sydney have become at least 40% more intense in two decades