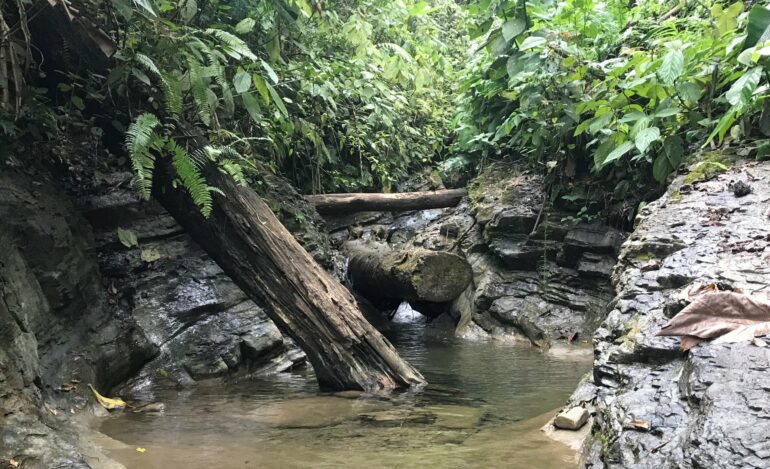 This interdisciplinary team used helium isotopes and other geochemical data from fluids and rocks to show that volcanic material is sourced from the Galapagos plume, over 900 miles (1500 km) away. The findings of this study, “High 3He/4He in central Panama reveals a distal connection to the Galápagos plume”, were published today in the journal Proceedings of the National Academy of Sciences.

“We can compare volcanic systems to the body of a living organism; when the organism bleeds, it’s kind of like magma bleeding out of the Earth. And you can measure the composition of that magma, just like you can measure a blood type. In this study, we measured an unexpected volcanic gas composition, sort of like when a human has a rare blood type. In the case of the Earth, we then try to explain where it came from in terms of deep geological processes.”

The team showed that relatively hot material originating from Earth’s deep interior travels laterally through the shallow mantle, similar to wind blowing at Earth’s surface. Chemical observations were combined with geophysical imaging of Earth’s deep interior to pinpoint the source and direction of this so-called “mantle wind”.

Typically, material cannot easily pass through a subduction zone, where the edge of a tectonic plate, called a “slab”, acts as a barrier. However, the region beneath Panama is unusual in that there appears to be a “slab window” that allows this mantle wind to blow through. Overall, this study tells us that, even after billions of years of evolution, our planet remains a dynamic system marked by large-scale movements of solid material, miles beneath our feet.

“Exotic volcanic chemical features have previously been documented in Central America. We use these chemical characteristics as indicators for large geological processes. In this case, our findings help explain why plume-derived volcanic material shows up in central Panama, even though there are no active volcanoes there,” added Bekaert.

“Our work suggests that small bits of deep mantle material were carried by ‘mantle wind’ blowing through the window in the subduction zone. Broadly speaking, this informs us about the nature and extent of large-scale mixing processes that contribute to the heterogeneous, or diversified, nature of the solid Earth” said Peter Barry, assistant scientist at WHOI and senior author of the paper.

Many of the study’s samples were collected over the past 15 years, but only in light of the insights from other disciplines of geoscience—such as geophysics and lava studies—did the message from helium isotopes become clear.

The geochemical composition of Earth’s interior is highly diverse. It has been well established that rising plumes of superheated rock in Earth’s mantle are the main channels for transporting geochemically enriched material deep underground, but the extent to which lateral flow processes disperse mantle material far from vertical plumes, remains widely unknown. The finding of lateral transport of deep, exotic material across the Earth’s interior could have far-reaching implications for scientist’s understanding of the chemical evolution of our planet over geological time.

Researchers use machine learning to speed up counting of microplastics