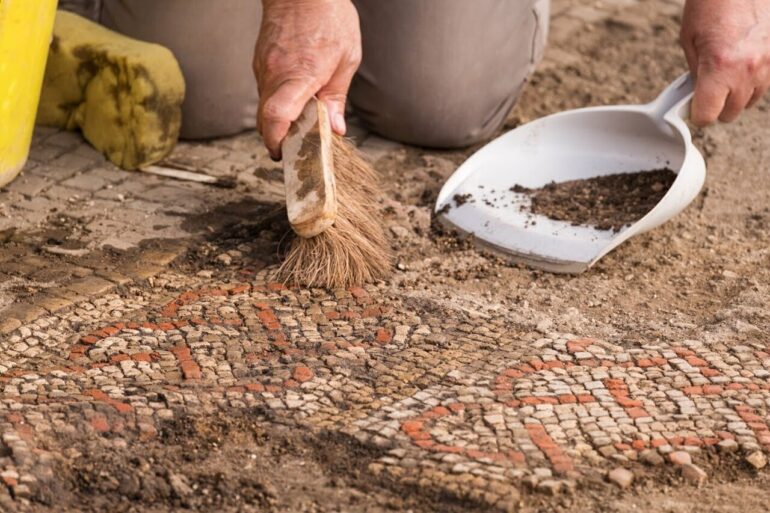 Archaeologists have unearthed the first Roman mosaic of its kind in the UK. Today (Thursday 25th November 2021), a rare Roman mosaic and surrounding villa complex have been protected as a Scheduled Monument by DCMS on the advice of Historic England. The decision follows archaeological work undertaken by a team from University of Leicester Archaeological Services (ULAS), working in partnership with Historic England and in liaison with Rutland County Council.

The initial discovery of the mosaic was made during the 2020 lockdown by Jim Irvine, son of landowner Brian Naylor, who contacted the archaeological team at Leicestershire County Council, heritage advisors to the local authority. Given the exceptional nature of this discovery, Historic England was able to secure funding for urgent archaeological investigations of the site by ULAS in August 2020. Further excavation involving staff and students from the University of Leicester’s School of Archaeology and Ancient History examined more of the site in September 2021. The remains of the mosaic measure 11m by almost 7m and depict part of the story of the Greek hero Achilles.

The artwork forms the floor of what’s thought to be a large dining or entertaining area. Mosaics were used in a variety of private and public buildings across the Roman Empire, and often featured famous figures from history and mythology. However, the Rutland mosaic is unique in the UK in that it features Achilles and his battle with Hector at the conclusion of the Trojan War and is one of only a handful of examples from across Europe.

The room is part of a large villa building occupied in the late Roman period, between the 3rd and 4th century AD. The villa is also surrounded by a range of other buildings and features revealed by a geophysical survey and archaeological evaluation, including what appear to be aisled barns, circular structures and a possible bath house, all within a series of boundary ditches. The complex is likely to have been occupied by a wealthy individual, with a knowledge of classical literature.

Fire damage and breaks in the mosaic suggest that the site was later re-used and re-purposed. Other evidence uncovered includes the discovery of human remains within the rubble covering the mosaic. These burials are thought to have been interred after the building was no longer occupied, and while their precise age is currently unknown, they are later than the mosaic but placed in a relationship to the villa building, suggesting a very late Roman or Early-Medieval date for the repurposing of this structure. Their discovery gives an insight into how the site may have been used during this relatively poorly understood early post-Roman period of history.

Evidence recovered from the site will be analysed by ULAS at their University of Leicester base, and by specialists from Historic England and across the UK, including David Neal, the foremost expert on mosaic research in the country.

The protection as a scheduled monument recognises the exceptional national importance of this site. It ensures these remains are legally protected and helps combat unauthorised works or unlawful activities such as illegal metal detecting. The site has been thoroughly examined and recorded as part of the recent investigations and has now been backfilled to protect it for future generations.

The villa complex was found within an arable field where the shallow archaeological remains had been disturbed by ploughing and other activities. Historic England is working with the landowner to support the reversion of these fields to a sustainable grassland and pasture use. These types of agri-environment schemes are an essential part of how we can protect both the historic and natural environments and have contributed around £13 million per year towards the conservation and maintenance of our rural heritage. They help to preserve sites like the Rutland mosaic so that people can continue to enjoy and learn about our fascinating history.

In collaboration with the University of Leicester and other stakeholders, Historic England is planning further excavations on the site for 2022.

Discussions are on-going with Rutland County Council to explore the opportunity for an off-site display and interpretation of the villa complex and its finds. The form and scope of this work will be informed by the proposed future excavations and will be the subject of a future National Lottery Heritage Fund bid.

The site is on private land and not accessible to the public.

John Thomas, Deputy Director of ULAS and project manager on the excavations, said: “This is certainly the most exciting Roman mosaic discovery in the UK in the last Century. It gives us fresh perspectives on the attitudes of people at the time, their links to classical literature, and it also tells us an enormous amount about the individual who commissioned this piece. This is someone with a knowledge of the classics, who had the money to commission a piece of such detail, and it’s the very first depiction of these stories that we’ve ever found in Britain.

“The fact that we have the wider context of the surrounding complex is also hugely significant, because previous excavations on Roman villas have only been able to capture partial pictures of settlement like these, but this appears to be a very well-preserved example of a villa in its entirety.”

Jim Irvine, who initially discovered the remains, said: “A ramble through the fields with the family turned into an incredible discovery. Finding some unusual pottery amongst the wheat piqued my interest and prompted some further investigative work. Later, looking at the satellite imagery I spotted a very clear crop mark, as if someone had drawn on my computer screen with a piece of chalk! This really was the ‘oh wow’ moment, and the beginning of the story.

This archaeological discovery has filled most of my spare time over the last year. Between my normal job and this, it’s kept me very busy, and has been a fascinating journey. The last year has been a total thrill to have been involved with, and to work with the archaeologists and students at the site, and I can only imagine what will be unearthed next!”

Duncan Wilson, Chief Executive of Historic England, said: “To have uncovered such a rare mosaic of this size, as well as a surrounding villa, is remarkable. Discoveries like this are so important in helping us piece together our shared history. By protecting this site we are able to continue learning from it, and look forward to what future excavations may teach us about the people who lived there over 1,500 years ago.”

Richard Clark, County Archaeologist for Leicestershire and Rutland, said: “This has been the most extraordinary of discoveries, and for that, full tribute must be paid to Jim and his family for their prompt and responsible actions. It has been a privilege to have been involved in the investigation and a pleasure to have worked with such a skilled group of amateurs and professionals. The villa, its mosaic and the surrounding complex is the most outstanding find in the recent archaeological history of Rutland, placing the county on a national and international stage and providing a vivid insight into the life and demise of the local Romano-British elite at a time of remarkable change and upheaval. The final phase of burials is just one of many intriguing aspects to the investigation, suggesting a continuing knowledge and respect for the site in the post-Roman period.”

Nigel Huddleston, Heritage Minister, said: “This fascinating discovery of an elaborate Roman complex in Rutland is helping us to understand more about our history. I’m delighted we have protected this site to help further studies and excavations.”

Professor Nishan Canagarajah, President and Vice-Chancellor of the University of Leicester, said: “It is difficult to overstate the importance of this discovery, and the excitement which it will doubtless provide to countless people; from those well-versed in Roman archaeology to those with perhaps only a passing interest. Having been lucky enough to visit the site myself, and meet some of the Leicester students from our School of Archaeology and Ancient History gaining real-world experience with ULAS on this major project, I witnessed first-hand the thorough but careful work which our archaeologists have undertaken to further our understanding of Roman Britain.”

The discovery of the Rutland villa and filming as the mosaic is uncovered for the first time in 1600 years will be featured as part of Digging for Britain when it returns to BBC Two and iPlayer in early 2022.

Host, Professor Alice Roberts, said: “What I love about Digging for Britain is that, when we set out to film the series, we have no idea what discoveries might come to light. This year, the revelations have been nothing short of spectacular, and each find brings us closer to understanding the lives of people who once lived in Britain. Archaeology brings you into intimate contact with the physical reality of the past.”