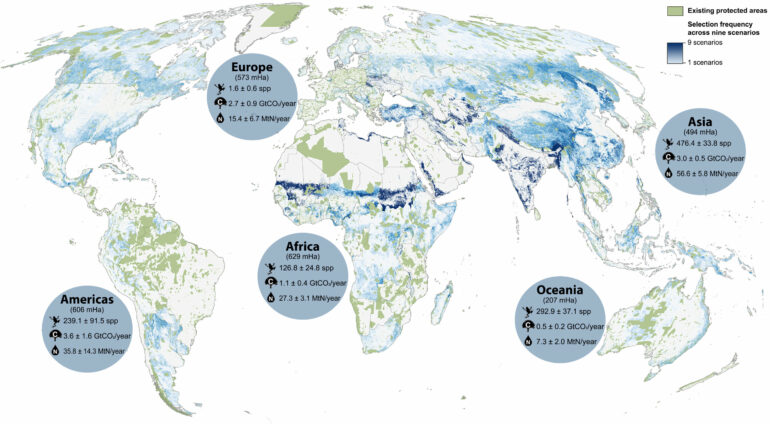 A global deal to protect nature and the benefits it provides to people will be negotiated during the United Nations COP15 biodiversity conference that begins today (Dec 7) in Montreal, with a key target of the new biodiversity framework calling for at least 30 percent of global land and sea areas to be conserved by 2030.

But the choice of lands that are set aside to meet this “30 by 30” target is also crucial, say researchers from the Center for Nature-based Climate Solutions (CNCS), a research center under the National University of Singapore’s Faculty of Science.

A recent study involving the center’s researchers found that if governments choose to conserve lands that have little human presence—usually peripheral areas far from urban centers, often dubbed “rock and ice” for their isolated landscapes—the benefits to climate change mitigation, biodiversity conservation or water purification would not be as significant as if other types of land areas were prioritized for conservation.

Dr. Zeng Yiwen, Research Assistant Professor at CNCS and the study’s lead author, pointed to the boreal forests of Siberia as an example of an intact landscape untouched by humans. “While these areas still have forests and wildlife, and protecting them is important, their species richness and carbon mitigation potential is still not as high as natural habitats in the tropics,” he said.

However, if governments chose to prioritize for preservation lands that are important for wildlife, then the co-benefits would be significantly higher, the study published in Science Advances found. Areas important for wildlife refer to places that host a large number of species, including those threatened with extinction, and include areas in India and Indonesia, for instance.

Conserving land areas that are known to be large carbon stores or water quality regulators would also increase the amount of co-benefits that nature can provide to wildlife, the study showed. This includes areas in Malaysia and Brazil.

Natural habitats such as forests are considered nature-based climate solutions as they have the ability to draw down the amount of planet-warming carbon dioxide in the atmosphere through the process of photosynthesis. But these ecosystems do not just help humanity’s fight against climate change. Healthy habitats are homes for wildlife, and can also absorb nutrients from groundwater, helping to purify the resource for surrounding communities.

Negotiations of the “30 by 30” goal at COP15 follows an outcome at the COP27 climate talks, which concluded on Nov 20 in Egypt’s Sharm El-Sheikh resort town. The outcome from the climate talks had, for the first time in history, recognized the importance of nature-based solutions for both climate mitigation and adaptation, setting the stage for greater recognition of nature in humanity’s bid to avert catastrophic climate impacts.

The different priorities used in deciding what lands to conserve to meet the 30 by 30 goal—whether they are areas less used by humans, important for wildlife, or key providers of ecosystem services—would impact the degree to which co-benefits could be reaped.

By averaging the benefits across the different conservation priorities, the authors found that protecting at least 30 percent of the global land area could confer protection to over 1,130 vertebrate species whose habitats currently lack any form of protection.

Dr. Zeng said, “By protecting nature, we can save a paradise.”

The importance of connectivity

Draft text of the “30 by 30” goal also referenced the importance of establishing protected areas that are well-connected and integrated.

Earlier studies had shownthat connectivity increases patch size by connecting two or more protected areas and improves resilience by helping organisms to keep up with the pace of climate change.

However, while protected area expansion and connectivity are necessary, more than 75 percent of the protected areas do not have adequate resources in terms of staff and budget for effective management and conservation, said Dr. Rachakonda Sreekar, CNCS Research Fellow and lead author of the second study, published in the journalBiological Conservation.

“To effectively meet the 30 percent protected area target, current global expenditure needs to be increased from about US$24b per year to a value between US$103b and US$177b per year,” the researchers added.

This shortfall could be narrowed by developments in the carbon market.

Organizations keen on buying carbon credits from nature-based projects, such as a forest conservation effort, could provide the finance needed to expand protected areas.

Dr. Sreekar’s study modeled where such funds could be deployed to meet the “30 by 30” goal, in a way that will also maximize connectivity for wildlife.

The researchers found that of the 210 countries and territories that have not set aside 30 percent of their lands for conservation, 176 of them had suitable space—meaning areas that are not farmland or towns, and are connected to existing nature areas—for new protected areas to be established.

The study showed that if governments focus on conserving these connected nature areas, only about 90 of the 176 countries and territories can meet the 30 by 30 target. Dr. Sreekar said this highlights the fragmented nature of the world’s protected areas, and the importance of ensuring connectivity in nature preservation.

Still, the study showed that at the current average market price of US$5 per ton of emissions, 79 of the 176 countries and territories can reap enough nature-based carbon credits per unit area to produce profits. Another 30 can meet at least half of their financial shortfall.

Dr. Sreekar added, “Our study showed that some countries can expand their protected area network with income generated by trading carbon credits in voluntary markets… By illustrating opportunities and limitations, we display the expectations of using nature-based climate solutions for protected area expansion that benefit biodiversity, climate, and society.”