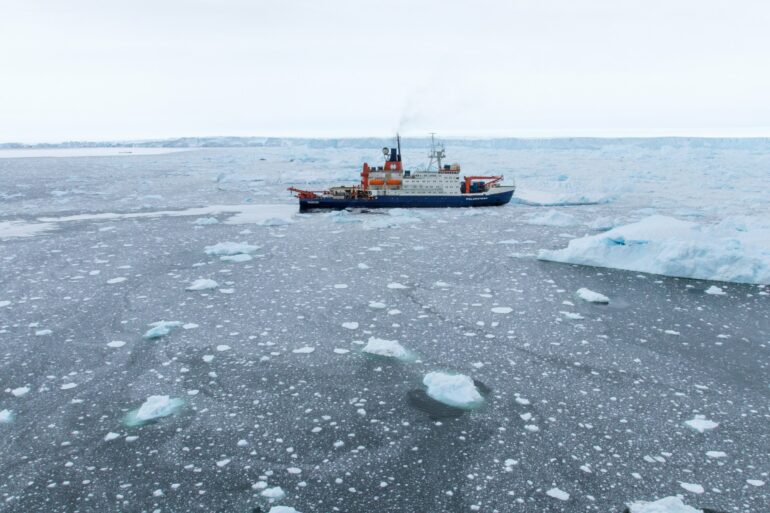 Roughly 35 million years ago, Earth cooled rapidly. At roughly the same time, the Drake Passage formed between South America and the Antarctic, paving the way for the Antarctic Circumpolar Current. Thanks to these two factors, Antarctica was soon completely covered in ice. As a study from the Alfred Wegener Institute now shows, this massive glaciation was delayed in at least one region. This new piece of the puzzle concerning the early history of the West Antarctic Ice Sheet could help to predict its unstable future. The study was just released in the Nature journal Communications Earth & Environment.

For climate researchers, the West Antarctic has been in the spotlight for years. Here, the West Antarctic Ice Sheet lying atop the continent stretches to the adjacent Amundsen Sea. Near the coast, the ice is still in direct contact with the soil; farther toward the open sea, it floats. Because climate change progressively warms the seawater, the latter is increasingly eroding the ice shelf from below. The grounding line—the last point at which the ice still rests on the ground—moves farther and farther inland. Due to meltwater and calving icebergs, the Thwaites Glacier, which flows into the Amundsen Sea, now loses twice as much ice as 30 years ago. If the West Antarctic Ice Sheet were to collapse entirely, global sea levels would rise by more than three meters.

“The stability of the West Antarctic Ice Sheet is critical to the future development of the global sea level,” says the study’s first author, Gabriele Uenzelmann-Neben from the Alfred Wegener Institute, Helmholtz Centre for Polar and Marine Research (AWI). “Accordingly, researchers around the world are working to predict the future behavior of the ice in a warmer world using numerical simulation. The more we know about the history of the West Antarctic Ice Sheet, the more accurate we can make these models. Its more recent history is well-documented, but we still know very little about its earlier years—particularly the formation phase. Our study delivers an important piece of the puzzle.”

In the course of two research cruises on board the Polarstern, the Geophysicist and her team investigated sediments in the vicinity of Pine Island Trough, a channel-like furrow in the seafloor of the shallow part of the Amundsen Sea that stretches from north to south and leads directly toward the western coast of Antarctica. To collect data, the AWI team relied on the tried and proven reflection seismology method: the Polarstern towed a 3,000-meter-long measuring cable—or streamer—behind her. The streamer is equipped with hydrophones that utilize a total of 240 measuring channels. During survey cruises, an airgun is used to produce seismic pulses behind the ship. These pulses penetrate the seafloor and are reflected back at geological boundaries—e.g. between the sediment and hard rock—which is recorded by the streamer’s hydrophones. Based on the different travel times for the waves and the respective positions of the individual channels, the internal structure of the seafloor can be mapped.

The measurement data revealed a large sediment body, a sediment drift, on the eastern flank of Pine Island Trough, one with no counterpart on its western side. “Because of the Coriolis effect produced by Earth’s rotation, this asymmetrical deposition of a sediment drift on the trough’s eastern side but not the western one can only have been produced by a deep-water current that flowed toward the coast from north to south,” says Uenzelmann-Neben. “In order for that to occur, the ocean circulation at the time of the deposition had to be similar to today’s conditions, that is, the prevailing westerlies and the Antarctic Circumpolar Current had to have been located far to the south. And similar to today, the deep water upwelled through the trough must have been comparatively warm.”

Additional study of pollen from sediment cores gathered near the trough indicate that the base of the sediment drift was formed roughly 34 to 36 million years ago. At precisely the same time—the Eocene-Oligocene boundary—temperatures plummeted around the globe, and the Antarctic continent became covered in ice. “Our study offers compelling evidence that at the time of the great glaciation, warmer deep water upwelled near the Amundsen Sea shelf and delayed the West Antarctic Ice Sheet’s expansion to the sea,” the AWI Geophysicist explains. “This important and unexpected finding emphasizes the tremendous importance that ocean currents had even during the formation phase of the West Antarctic Ice Sheet and continue to have today. Armed with this additional knowledge concerning the ice sheet’s earliest phase, forecasts on its future stability and ice retreat can now be improved.”


Citation:
The formation of the West Antarctic Ice Sheet was very different than previously believed (2022, February 21)