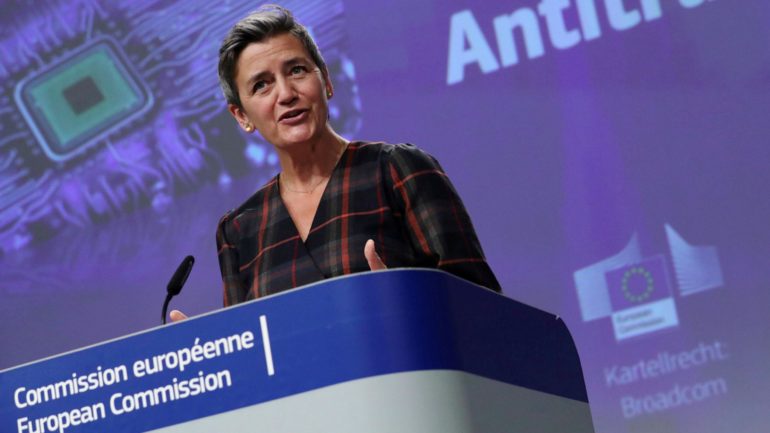 It has also announced a second formal investigation into the company’s e-commerce processes.

In a statement, the commission said Amazon was using the data of third-party sellers — such as order numbers, revenues and number of visitors — to inform its strategic business decisions, like reducing the price of products.

The issue arises because of Amazon’s dual role in selling products itself, and acting as a platform for independent — sometimes rival — sellers.

“Data on the activity of third-party sellers should not be used to the benefit of Amazon when it acts as a competitor to these sellers,” Margrethe Vestager, the EU’s competition chief, said in the statement.

The commission, the executive arm of the European Union, launched a probe into the online retailer in July 2019 on concerns over anti-competitive behavior.

Amazon said it disagreed with the commission’s assertions and “will continue to make every effort to ensure it has an accurate understanding of the facts.” It said that it represents less than 1% of the global retail market.

“No company cares more about small businesses or has done more to support them over the past two decades than Amazon,” the e-commerce giant said.

The commission’s second antitrust investigation will look at how the company choses which sellers offer products via Amazon Prime, its paid-for premium service. It will investigate the possible preferential treatment of Amazon’s own retail business and those that use its logistics and delivery services (known as “fulfilment by Amazon” sellers) over other sellers.

It will also look into the Amazon’s “buy box” function, which offers customers a one-click button to add a product to their shopping cart. U.S. regulators and third-party sellers have previously questioned Amazon over which products get placed in the all-important buy box. Amazon maintains that the buy-box features the offer it thinks customers will prefer overall, while factoring in things like price, delivery speed and Prime.

Vestager said that, while going through 80 million transactions and 100 million products listed on Amazon marketplace, “it became increasingly clear that there might something that we should look into further on the buy box.”

The company will have now the chance to examine the commission’s conclusions and reply in writing or via an oral hearing.

Clarification: The European Commissions has confirmed that its Statement of Objections, published Tuesday, does not constitute legal charges against Amazon.