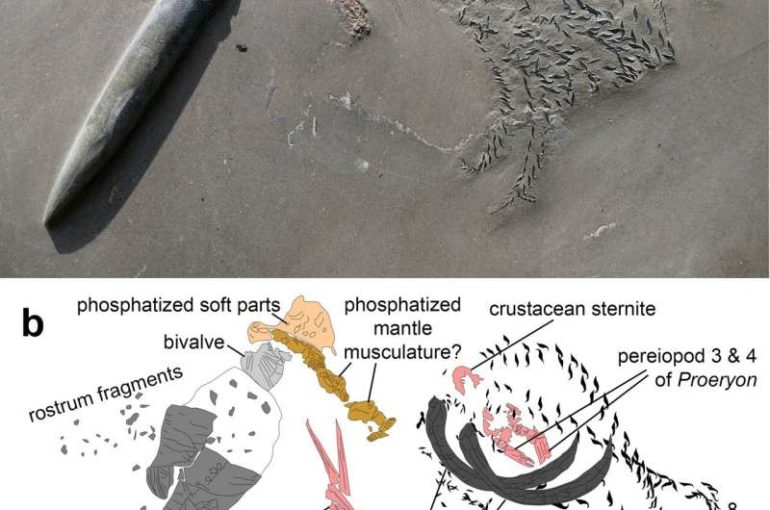 A team of researchers has discovered a fossil they are describing as a leftover fall event in which one creature was in the process of eating another creature that was not consumed. In their paper published in the Swiss Journal of Palaeontology, the group describes the fossilized find and what it taught them about behavior between ancient cephalopods and vertebrate predators.

Over the course of many years, archeologists have unearthed fossils of creatures that were interacting at the time of their death—one such type of interaction involves a predator capturing prey. Prior researchers have called fossils of creatures just prior to being consumed “pabulites” (Latin for “leftovers.”) In this new effort, the researchers studied an ancient crustacean pabulite that was about to be consumed by an ancient squid-like creature called a belemnite.

The combined fossils were discovered by an amateur collector who found them in a quarry in Germany. Recently, one of the members of the research team happened across the collection and arranged for the State Museum of Natural History Stuttgart to purchase the specimens. Soon thereafter, a research team was assembled and the group began studying the find.

Both of the specimens were still embedded in the fossilized sediment—one was a belemnite, the other a crustacean of the genus Proeryon—it had a body reminiscent of a lobster with long, thin claws. The belemnite was in excellent condition, allowing the researchers to see that a large portion of its upper soft body had been torn away by a predator. The Proeryon, on the other hand, was in poor condition, and the researchers believe that it was in the process of molting. Both fossils were dated to approximately 180 million years ago.

After careful study of the positioning of the two fossils, the researchers concluded that the belemnite was in the process of biting the crustacean, or perhaps the skin it was shedding. And while it was doing so, the belemnite was itself bitten by a larger predator—possibly an ancient shark. The bite, it turned out, was lethal. The belemnite, with the crustacean skin still in its mouth, sank to the bottom of the sea and died.

Fossils of largest theropod to date found in Australia

Citation:
Fossil of ancient squid eating a crustacean while being eaten by an ancient shark (2021, May 10)
retrieved 10 May 2021
from https://phys.org/news/2021-05-fossil-ancient-squid-crustacean-eaten.html