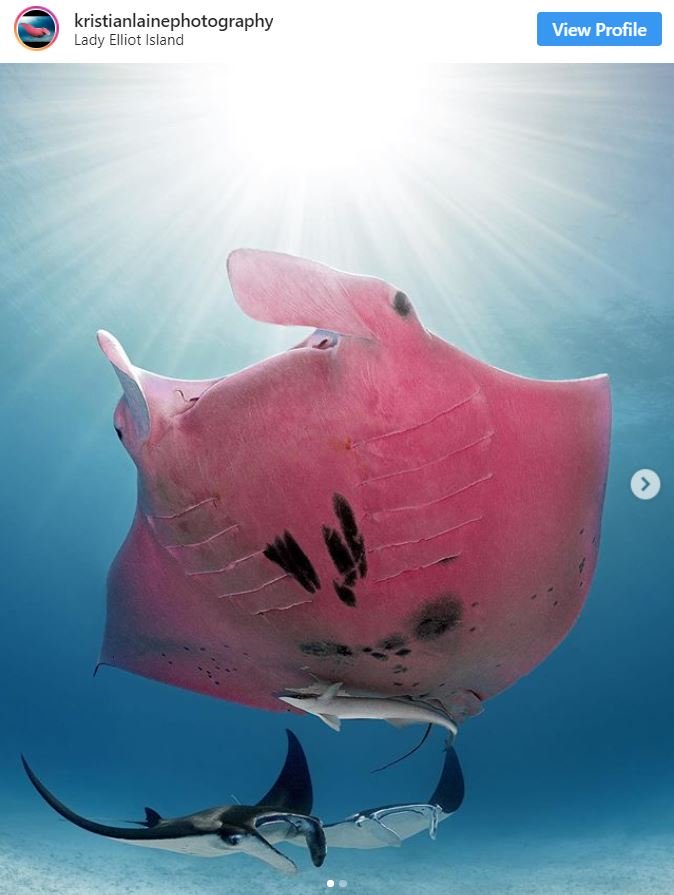 When photographer Kristian Laine went out to the Great Barrier Reef near Lady Elliot Island to photograph some turtles, manta rays, and sharks, he wasn’t expecting to stumble across the only known pink manta ray in the world.

“I had never even heard of a pink manta and when I first saw it, I thought my camera was playing up,” he told ScienceAlert.

“Only later that night I saw a photo of a pink manta on the restaurant’s notice board and thought it was a joke until I rushed to check the belly patterns in my camera.”

The pink reef manta ray (Mobula alfredi) was first spotted in 2015, where diver Ryan Jeffery took some photos of the pink-tinged beauty while on a dive.

The mature male caused a stir at the time, and was named Inspector Clouseau after the bumbling inspector from the Pink Panther.

The Inspector is around 3.3 metres (11 feet), and has been elusive in the five years since it was first noticed.

Although locals are now well aware of him, the pink manta has only been seen around 10 times.  Despite how shy he is, scientists from the research group Project Manta are still on the case investigating what causes the vibrant pink colour; they took a small biopsy in 2016 to try to discover more.

Even after Emotet takedown, Office docs deliver 43% of all malware downloads now

In Apps and WebComputer science
on 23 July 20214 min read

“There has not been a thorough investigation into diet or stable isotope analysis, but given the stability of the white ‘birthmark’ and pink colour over time we think diet can be ruled out,” explains ecologist Asia Haines from Project Manta.

“The working theory is that it is just a different and very unique expression of the melanin, but that is still to be confirmed.”

But Laine is just glad he got to experience such a rare sight.

“Overall it was very calm and just let me be…