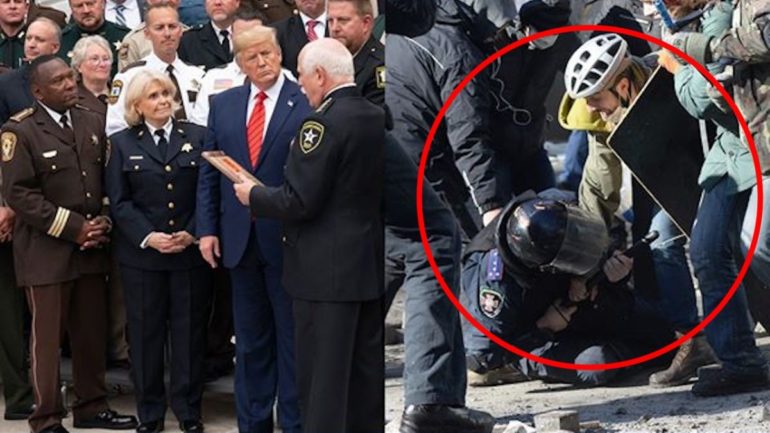 President Donald Trump’s latest Facebook ad campaign uses a photo of protesters clashing with police, and suggests there will be “chaos and violence” if the president isn’t re-elected in November. Facebook users who see the new ad will probably assume the photo was taken in the United States sometime this year. In reality, the photo is from Ukraine. In 2014, no less.

The photo, which shows a cop on the ground and a protester trying to grab their baton, can be found on the Wikipedia page for the Ukrainian Revolution in 2014 and was taken by photojournalist Mstyslav Chernov. The image was distributed under a Creative Commons 3.0 license, allowing anyone to use it as long as credit is given to the photographer. The Trump campaign did not credit the photographer.

The new Facebook ad features the words “Public Safety vs Chaos and Violence” with a photo of President Trump and unnamed police officials above the words “public safety” and a photo of the Ukrainian protesters under “chaos and violence.” Ukraine’s region of Crimea was annexed by Russia on February 20, 2014, just two days after this photo was taken on February 18.

The ad never explicitly says that the photo of violence is supposed to represent the U.S., but again, that will be everyone’s obvious assumption, given the current uprising that’s happening in places like Portland, Oregon.