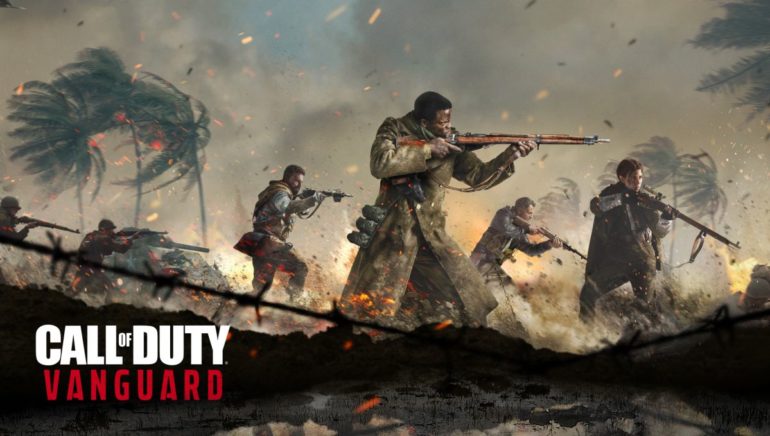 Publisher Activision Blizzard, responsible for the game this article refers to, is currently embroiled in ongoing litigation in regards to claims reporting a workplace culture that allegedly enabled acts of sexual harassment, abuse and discrimination. Read our Activision Blizzard lawsuit timeline of events for ongoing coverage of the events.

It’s official, Call of Duty: Vanguard is this year’s CoD and it’s coming in November 2021.

Given the unwavering annual release schedule of Call of Duty titles, this is hardly surprising. But what we are pleasantly surprised by is that the series is returning to a World War 2 setting. And with Sledgehammer Games (developer of Call of Duty: WW2) at the helm, we’re somewhat confident of the game’s quality.

The first trailer for Call of Duty: Vanguard dropped on August 16 and the full reveal took place on August 19 inside the Call of Duty: Warzone battle royale game. But Gamescom 2021 has brought us our latest look at the game, revealing the first campaign gameplay in a brand new trailer.

Read our guide below to find out everything we know so far about Call of Duty: Vanguard.

[Update: Gamescom 2021 brought us our first look at Call of Duty: Vanguard’s campaign in a brand new trailer. Watch it for yourself below.]

Call of Duty: Vanguard: here’s what you need to know

During Gamescom 2021, the first footage of Call of Duty: Vanguard’s campaign was revealed in the video below. Across almost 10 minutes, the footage puts us in the shoes of Pollina Petrova in a Stalingrad under attack. This is just one of the stories that will be told in the game’s campaign which spans across the theatre of war and attempts to tell the story of the birth of special forces through individuals.

The first trailer for the game was made available on August 16, 2021 and shows scenes from the second World War. From downed airplanes in the Pacific to war torn European cities, the trailer sets the tone for the upcoming game.

Most importantly, though, it shows us when we’ll hear more about Vanguard: August 19, 2021 during an in-game Call of Duty: Warzone event.

Check it out for yourself below.

The full reveal trailer was then released on video and social platforms, after debuting within Call of Duty: Warzone. The trailer presents suitably bombastic CoD affair, so it’s clear to see that the series isn’t losing its penchant for over-the-top action any time soon.

Call of Duty: Vanguard will launch on November 5, 2021. If you opt to pre-order the game, which you can do now, you’ll receive access to the open beta ahead of release. The trailer confirmed that PlayStation console owners will have first dibs on the early access program, with other platforms receiving it at a later date.

We learned the official release date on August 19, 2021, during which a special Call of Duty: Warzone event known as The Battle of Verdansk will take place. During the event, players will be able to complete objectives to earn various rewards, and be treated to the first showing of Call of Duty: Vanguard’s official reveal.

Call of Duty: Vanguard will return to the second World War, which was originally revealed via a report by ModernWarzone (via GamesRadar ), which was later verified by both Eurogamer and VGC.

This was later confirmed in the original teaser trailer which showcased a World War 2 setting across numerous theaters of conflict, and later built upon in the recent reveal trailer. As such, Vanguard could be the most ambitious Call of Duty to date when it comes to the second World War setting.

Sledgehammer Games have since revealed some extra context on Vanguard’s setting and story, stating that the game tells “the untold stories of multinational heroes that formed Task Force One, changing the face of history and setting the stage for special forces as we know it.”

While Call of Duty: Vanguard will remain an ahistorical take on the second World War, its playable characters in the campaign do seem to have roots in real historical figures – Polina Petrova looks to be inspired by famous female Soviet sniper Lyudmila Pavlichenko.

Zombies fans rejoice, as the popular wave-based co-operative mode is returning in Call of Duty: Vanguard. Even better, the mode’s original creator, Treyarch, is working on this most recent iteration.

Activision confirmed via press release that the new Zombies mode will build upon the narrative found in Call of Duty: Black Ops Cold War’s iteration of the popular mode. In addition, Treyarch will be introducing new innovations and never-before-seen content to Zombies in Vanguard.

Free weekend alpha on PS4 and PS5
Great news for PlayStation players looking forward to Call of Duty: Vanguard, who will get to try out the game’s multiplayer ahead of release soon.

No pre-order is required to download the alpha. It’s free to download for all to try for that weekend only.

August 19 reveal confirmed
Proving previous rumors to be correct, Activision announced that the full Call of Duty Vanguard reveal will take place on August 19, 2021, within the Call of Duty: Warzone battle royale via an event known as the Battle of Verdansk.

To take part, players had to download the free-to-play Call of Duty: Warzone client through the PlayStation Store on PS4 and PS5, Microsoft Store on Xbox Series X/S and Xbox One, or on PC via the Battle.net launcher.

Various cosmetic rewards were also up for grabs for players who tune into the Battle of Verdansk event. Such rewards included a bike skin and blueprints for a new weapon and knife.

Notable leaker Tom Henderson has since corroborated this claim in a DualShockers report, claiming that four of his own sources have confirmed that the Call of Duty reveal will take place on August 19.

What’s more, an event listing which recently appeared on the PS Store seemingly confirms August 19 as the date of the game’s worldwide release, which is set to take place within Call of Duty: Warzone.

The images appear to show that three editions of Call of Duty: Vanguard will be available: a standard edition, a cross-gen bundle and an ultimate edition.

In addition, the images show skins for Operators Lucas, Wade and Polina, as well as for weapons including the Breacher assault rifle, Snowstorm rifle and Thunderhead submachine gun.

According to CharlieIntel, Activision is issuing copyright take down notices for the images.

Call of Duty: VANGUARD🛑 WW2 Pacific theater.🛑 Contains some remastered maps from CoD WaW (not clear which ones at the moment).🛑 Treyarch is assisting in development.#CallofDuty #CODVanguard #CoD pic.twitter.com/4B41SMXavZAugust 12, 2021

Warzone integration and reveal?
Call of Duty: Vanguard was notably absent at E3 2021, but according to a recent report from VGC, the game could be revealed via an in-game Warzone event like last year’s Call of Duty: Black Ops Cold War.

In Apps and WebCompaniesGamingSmartphones
on 13 April 20215 min read

The same is true of the event listing which recently appeared on the PS Store. It suggests Call of Duty: Vanguard is set to be revealed “in Call of Duty: Warzone” itself.

What’s more, VGC’s report suggests a big Warzone integration could be in the pipeline. Developed by Sledgehammer Games, Call of Duty: Vanguard is to be powered by Modern Warfare’s ‘IW8’ engine, just like Warzone, which should make integration of the games easier.

According to VGC, Sledgehammer has plenty of content planned for Warzone when it shifts to this supposed WW2 setting, including Warzone’s “largest and most ambitious [map] to date” that’s “planned to coincide with the release of the game rather than arriving months later.” The report says that the map will take players to the Pacific theater of WW2 and adds that there will be new vehicles to help players traverse the larger space.

These comments align with those made by Activision at its most recent earnings call, which clarify that the developer is working on creating an “even deeper content integration between [the game’s] premium and free experiences,” teasing a “substantial innovation within Warzone itself.”

PS4 and Xbox One release?
Yes, Activision is committed to “launching a seamless experience for both current and next-gen console players.”

In light of this, prominent Call of Duty and Battlefield leaker Tom Henderson took to Twitter to share information about Call of Duty: Vanguard, stating that the game will be “held back” by versions of the game on PS4 and Xbox One consoles (via Gamesradar).

It’s as of yet unclear how much these rumored last generation versions of the game might differ from their current-gen counterparts and, according to Henderson, this cross-generation strategy will be in place for both Vanguard and the next Call of Duty developed by Infinity Ward, positing that game’s release in 2022 if Call of Duty’s annual schedule is to be upheld.

WW2 Vanguard is going to be held back so bad by previous generation consoles, and from my understanding they are planning previous gen for both Vangaurd and IW’s next title. pic.twitter.com/PmokyHP0BUApril 18, 2021

Built with current-gen in mind?
Almost as a direct counter to Henderson’s leak, though, Activision president Dan Alegre shared details on Call of Duty: Vanguard during the company’s Q1 earnings call, as reported by GamesRadar, saying the new game is “built for next-generation experience.” This could imply that Call of Duty: Vanguard is being developed with PS5 and Xbox Series X consoles as the primary focus, even if not exclusively for these systems.

Still, with Activision’s clarification that the game will offer a “seamless experience for both current and next-gen console players,” it seems unlikely that the next COD will fully utilize the power of the PS5 and Xbox Series X.

A name change?
ModernWarzone initially reported that Call of Duty WW2: Vanguard was the game’s working title, however, according to Eurogamer sources – and the leaks mentioned throughout this guide – Activision plans to stick with this name (less the WW2) for the final version. We had learned that Call of Duty: Slipstream might be the game’s official title – but maybe this was simply the working title, after all.

As mentioned, some eagle-eyed fans have spotted a dubious reference to Vanguard in some new promotional material for Warzone Season 5. Translating the Japanese text allegedly reads “Vanguard is coming,” though this is a difficult one to verify. Less complicated is the aforementioned PS Store listing that explicitly references Call of Duty: Vanguard.

Call of Duty: Vanguard: what we want to see

Utilize the power of PS5 and Xbox Series X

Black Ops: Cold War did it, so we expect Call of Duty: Vanguard to take optimization for next-gen consoles even further. We’re hoping that the new COD can be played in 120fps (ideally at 4K) and that it will implement DualSense controller support for extra immersion. While we can take or leave the DualSense support, 120fps for first-person shooters like CoD makes a huge difference, particularly when playing online.

As mentioned above, Activision’s clarification that the game will offer a “seamless experience for both current and next-gen console players” means it’s unlikely that the next CoD will fully utilize the power of next-gen systems, but we’d expect at least the same level of optimization as Black Ops: Cold War.

A fan-favorite, we’re hoping we’ll get the chance to take out some Nazi zombie hordes once again. But, while we do love the Zombies formula, it would nice to have a bit of shake-up with more of a variety in puzzles and some new maps to explore.

With a new CoD comes the opportunity to give Warzone a shake up, too, and we’re hoping that the battle royale gets something of a WW2 makeover, tying in with CoD 2021 and adding a freshness to the online game.

Given Activision’s aforementioned assertion that the game will bring with it a “substantial innovation” for Warzone, we’re hopeful on this front.

What we loved about Cold War’s multiplayer is that it went back-to-basics, with tight, well-made maps and a refined arsenal. Hopefully, Activision will keep this in mind with the new CoD.