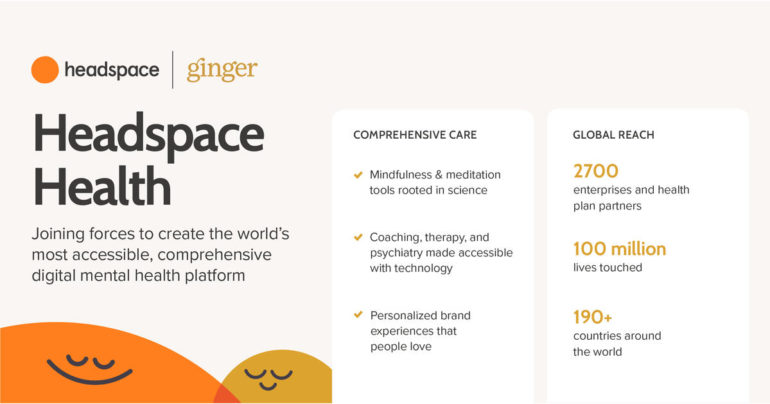 Together, Headspace and Ginger reach nearly 100 million users in more than 190 countries. They reach users with a direct-to-consumer model as well as through deals with more than 2,700 enterprises and health plans.

Headspace, founded in 2010, is a mindfulness and meditation platform. Ginger, also founded in 2010, provides a platform through which users can get access to behavioral health coaching, therapy and psychiatry.

The two companies have more than 800 employees. Their combined bookings by the end of 2021 will near $300 million.

Combined, they will reach consumers directly, as well as through employers and health plans. Their combined mental health dataset will be leveraged to deliver highly-personalized care, Headspace said.

Ginger is already reimbursed as a virtual in-network benefit through fully-insured, self-insured, and government-funded programs, such as Cigna and AmeriHealth Caritas District of Columbia, a Medicaid program. Nearly 700 companies provide Ginger as a benefit to their employees, including ViacomCBS, Delta Air Lines and Sephora.

Headspace is also fully covered through healthcare partnerships with companies like Bright HealthCare and Solera Health, which distributes Headspace to leading regional health plans through their Mental Health and Stress solution. More than 2,100 employers currently offer Headspace for Work for employees, including Starbucks, Adobe, Hyatt and Unilever. Headspace has also forged partnerships with various other tech brands like Microsoft, integrating with Microsoft Teams.