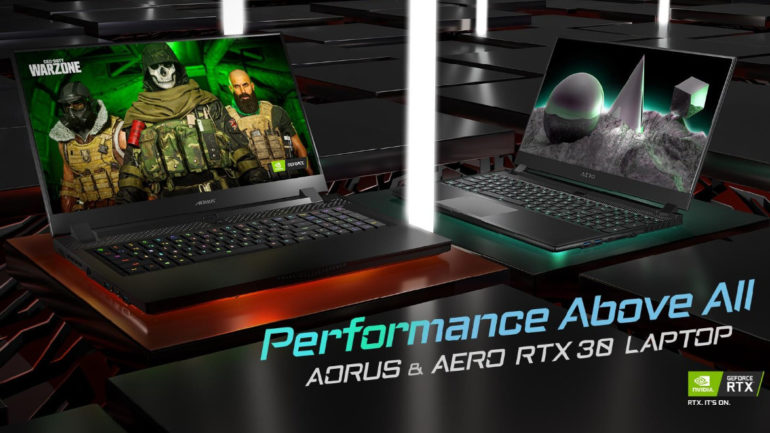 Gigabyte has announced a bunch of refreshed laptops at the virtual CES 2021, including Aorus gaming machines and Aero creator notebooks, all of which now pack Nvidia’s new GeForce RTX 30 series laptop GPUs.

The new gaming models comprise of the revamped Aorus 17G, plus fresh versions of the more compact 15G and 15P.

The flagship Aorus 17G is a 17.3-inch gaming laptop which uses (up to) an Intel Core i7 H series processor, which is now twinned with a GeForce RTX 3080 graphics card as the most powerful option.

This notebook also benefits from an IPS screen with a refresh rate of 300Hz, providing some seriously smooth frame rates in conjunction with that powerful GPU (the display has a Full HD resolution to help keep those frames per second figures up, too).

The Aorus 17G further offers a proper mechanical keyboard with Omron switches which Gigabyte boasts feel crisp and responsive under your fingertips.

Gigabyte’s overhauled Aorus 15G is a 15.6-inch laptop which is more portable than the 17G, of course, but can still pack in the same CPU and GPU combo. Again, the RTX 3080 is driving a Full HD IPS screen, although slightly notched back at a 240Hz refresh rate in this case. Battery longevity that’s in excess of eight hours is promised.

There’s also the Aorus 15P which is a ‘performance’ model, and this drops the spec to (up to) an RTX 3070 graphics card (still with up to an Intel Core i7 CPU), and has the same display as the 15G with a 240Hz refresh rate.

Moving onto the Aero thin-and-light laptops aimed at creative pros, Gigabyte revealed four refreshed models, one of those being the revamped Aero 15 OLED.

As the name suggests, this 15.6-inch notebook comes with an AMOLED screen which is 4K resolution (and supports HDR). The laptop maker observes that this is the world’s first Xrite Pantone color calibrated OLED display, and is VESA DisplayHDR 400 True Black certified, covering 100% of the DCI-P3 color gamut. It’s a gorgeous display, as we’ve seen in past models, and is perfect for photo and video editing.

The Aero 15 OLED can be equipped with up to an Intel Core i9 processor along with an RTX 3080 GPU.

There’s also a refreshed vanilla Aero 15 which provides a Full HD IPS screen rather than 4K OLED, and drops the hardware spec to (up to) an Intel Core i7 and RTX 3070.

There are two larger models, starting with the revamped Aero 17 HDR which is a 17.3-inch laptop with a 4K HDR IPS screen, again pairing an (up to) Core i9 CPU with an RTX 3080.  The vanilla Aero 17 has a Full HD IPS screen, with up to a Core i7 processor and RTX 3060 graphics card.

As you might expect, the Aero laptops have some serious connectivity chops including HDMI 2.1, mini-DisplayPort and Thunderbolt 3 ports (and a UHS-II SD card reader).

Discord is now an essential tool for hackers

In CybersecurityGaming
on 26 July 20212 min read

Pricing has yet to be announced, but these Gigabyte Aorus and Aero laptops should be on pre-order imminently.