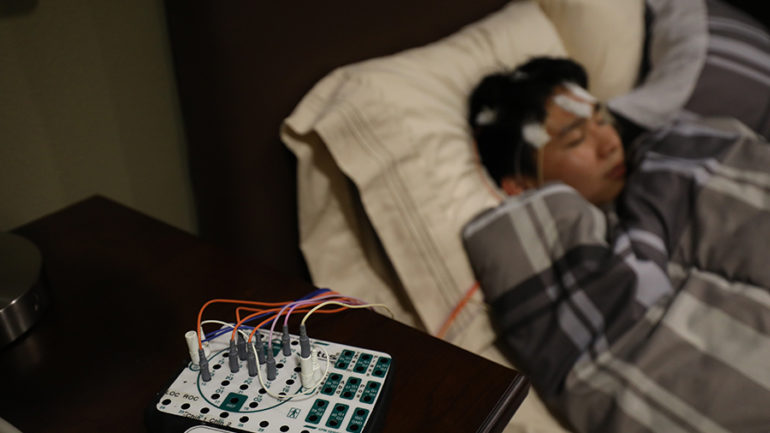 Most people listen to music throughout their day and often near bedtime to wind down. But can that actually cause your sleep to suffer? When sleep researcher Michael Scullin, Ph.D., associate professor of psychology and neuroscience at Baylor University, realized he was waking in the middle of the night with a song stuck in his head, he saw an opportunity to study how music—and particularly stuck songs—might affect sleep patterns.

Scullin’s recent study, published in Psychological Science, investigated the relationship between music listening and sleep, focusing on a rarely-explored mechanism: Involuntary musical imagery, or “earworms,” when a song or tune replays over and over in a person’s mind. These commonly happen while awake, but Scullin found that they also can happen while trying to sleep.

“Our brains continue to process music even when none is playing, including apparently while we are asleep,” Scullin said. “Everyone knows that music listening feels good. Adolescents and young adults routinely listen to music near bedtime. But sometimes you can have too much of a good thing. The more you listen to music, the more likely you are to catch an earworm that won’t go away at bedtime. When that happens, chances are your sleep is going to suffer.”

The study involved a survey and a laboratory experiment. The survey involved 209 participants who completed a series of surveys on sleep quality, music listening habits and earworm frequency, including how often they experienced an earworm while trying to fall asleep, waking up in the middle of the night and immediately upon waking in the morning.

In the experimental study, 50 participants were brought into Scullin’s Sleep Neuroscience and Cognition Laboratory at Baylor, where the research team attempted to induce earworms to determine how it affected sleep quality. Polysomnography—a comprehensive test and the gold standard measurement for sleep—was used to record the participants’ brain waves, heart rate, breathing and more while they slept.

“Before bedtime, we played three popular and catchy songs—Taylor Swift’s ‘Shake It Off,’ Carly Rae Jepsen’s ‘Call Me Maybe” and Journey’s ‘Don’t Stop Believin,'” Scullin said. “We randomly assigned participants to listen to the original versions of those songs or the de-lyricized instrumental versions of the songs. Participants responded whether and when they experienced an earworm. Then we analyzed whether that impacted their nighttime sleep physiology. People who caught an earworm had greater difficulty falling asleep, more nighttime awakenings, and spent more time in light stages of sleep.”

Additionally, EEG readings—records of electrical activity in the brain—from the experimental study were quantitatively analyzed to examine physiological markers of sleep-dependent memory consolidation. Memory consolidation is the process by which temporary memories are spontaneously reactived during sleep and transformed into a more long-term form.

“We thought that people would have earworms at bedtime when they were trying to fall asleep, but we certainly didn’t know that people would report regularly waking up from sleep with an earworm. But we saw that in both the survey and experimental study,” he said.

Participants who had a sleep earworm showed more slow oscillations during sleep, a marker of memory reactivation. The increase in slow oscillations was dominant over the region corresponding to the primary auditory cortex which is implicated in earworm processing when people are awake.

“Almost everyone thought music improves their sleep, but we found those who listened to more music slept worse,” Scullin said. “What was really surprising was that instrumental music led to worse sleep quality—instrumental music leads to about twice as many earworms.”

The study found that individuals with greater music listening habits experienced persistent earworms and a decline in sleep quality. These results are contrary to the idea of music as a hypnotic that might help sleep. Health organizations commonly recommend listening to quiet music before bedtime—recommendations that largely arise from self-reported studies. Instead, Scullin has objectively measured that the sleeping brain continues to process music for several hours, even after the music stops.

Knowing that earworms negatively affect sleep, Scullin recommends first trying to moderate music listening or taking occasional breaks if bothered by earworms. Timing of music also is important—try to avoid it before bed.

Another way to get rid of an earworm is to engage in cognitive activity—fully focusing on a task, problem or activity helps to distract your brain from earworms. Near bedtime, rather than engaging in a demanding activity or something that would disrupt your sleep, like watching TV or playing video games, Scullin suggests spending five to 10 minutes writing out a to-do list and putting thoughts to paper. A previous study by Scullin—partially funded by a National Institutes of Health grant and the Sleep Research Society Foundation—found that participants who took five minutes to write down upcoming tasks before bed helped “offload” those worrying thoughts about the future and led to faster sleep.