Hot ‘blob’ points to a neutron star lurking in Supernova 1987A 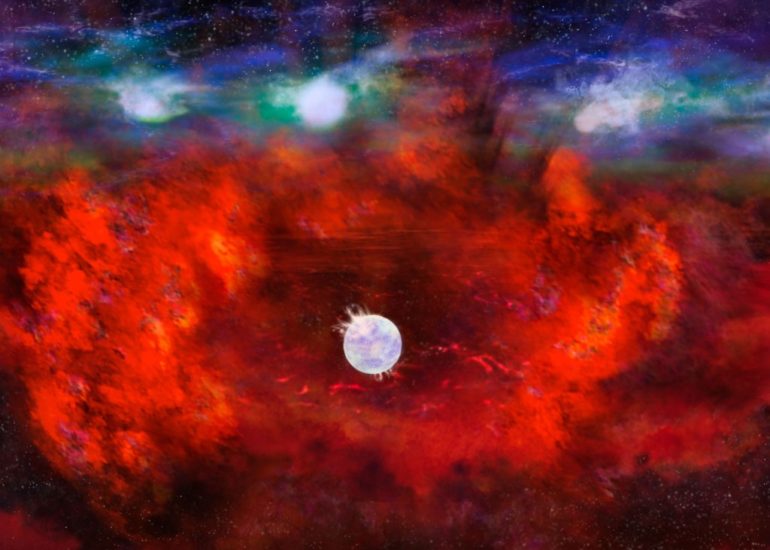 On February 24, 1987, an unexpected cosmic explosion rocked the astronomical community. Dubbed Supernova 1987A (SN 1987A), the fiery event — triggered by the implosion of a massive star — was the closest observed supernova to Earth since the invention of the telescope. It didn’t occur in our galaxy, though. SN 1987A self-destructed within the Large Magellanic Cloud, which is a satellite galaxy of the Milky Way that resides some 170,000 light-years from Earth. Nonetheless, SN 1987A was still so bright that naked-eye observers could see it for several weeks.

But the extraordinary sight of a nearby supernova lingering in Earth’s night sky isn’t the only thing SN 1987A bestowed upon us. It also gave astronomers an unprecedented opportunity to investigate what triggers supernovae, as well as how such powerful blasts ripple through their surroundings. In fact, we can see the shockwave from SN 1987A still speeding outward today, interacting with clouds of dust that encircle the original site of the cosmic explosion.

This time-lapse shows how Supernova 1987A’s shock wave explodes outward over the course of 25 years.

However, an enduring mystery remains: What did SN 1987A leave behind? According to new research, the answer is likely a neutron star.

For quite some time, astronomers have assumed SN 1987A initially left behind a neutron star. That’s because a few hours before the supernova’s light reached us, they detected an influx of neutrino particles washing over Earth, as would be expected if a supernova erupted nearby. These nearly unstoppable particles zip straight through…