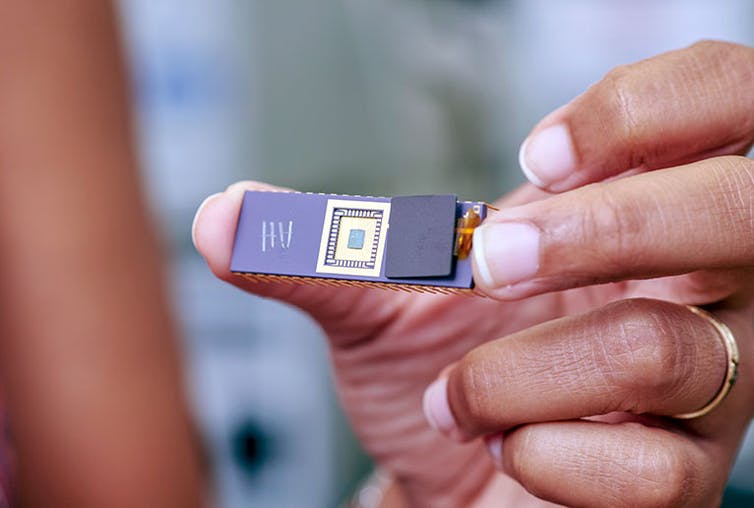 Sensors are all around. They are in automatic doors, at cash registers, in doctors’ offices and hospitals. They are used inside the body and outside.

Sensors detect aspects of the physical world – matter, energy, force – similarly to a person’s or animal’s senses. But instead of translating the information into nerve impulses, sensors translate them into electrical signals. The signals can be stored, processed on a computer or displayed on a screen. They can be a current or voltage that is constant or varying with time.

Sensors answer many important questions such as how well-inflated are a car’s tires, whether ice is building up on an airplane’s wings, whether carbon monoxide is in the air and how much oxygen is in your blood.

As an electrical engineer, I work with sensors all the time to monitor biological and environmental indicators such as glucose, heart rate and function, temperature and pH.

In the past few decades, sensors have moved from being relatively large, bulky instruments to small, inexpensive devices that are easy to carry around, build into things like phones, scatter around the environment or place on or inside someone.

[Expertise in your inbox. Sign up for The Conversation’s newsletter and get expert takes on today’s news, every day.]

The “thing” to be sensed can be anything in the physical environment that you can think of. It can be light, temperature, moisture, radiation, chemicals such as hydrogen peroxide or lead, biochemical substances such as glucose or DNA, or radio waves.

Light sensors use a device known as a photodiode to turn light into an electrical current. Certain materials and molecules give off light when they interact with other substances or particles. For example, invisible radiation is absorbed by materials known as scintillators to produce visible light, which is then detected by a light sensor. This is how X-rays are used in today’s medical imaging.

What makes a good sensor

A good sensor must be able to, for example, tell the difference in voltage when measuring light of one intensity against light of another intensity. A good sensor also needs to ensure that vibrations, temperature changes and extremes and other environmental factors don’t affect its output.

Cost is also a concern, because if a sensor is expensive only a few people or corporations can use it. If a sensor is low cost, then it can be made available to everyone.

So a sensor is anything that can detect an aspect of the physical environment and turn it into useful information. This information can help make your everyday life easier or solve some of today’s most pressing health issues.