In Canada, People Are Fighting to Save a Majestic Tree That’s Older Than Canada 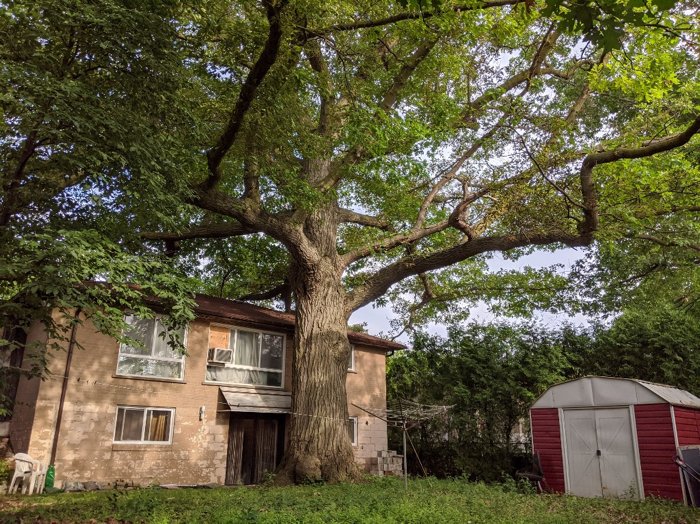 In the shadow of Canada’s largest cluster of skyscrapers, Toronto is looking to preserve a majestic, centuries-old oak tree – but efforts have been complicated by the pandemic.

The towering 24-meter (79-feet) high Northern Red Oak is one of the oldest trees in these parts, having sprouted an estimated 300 years ago, around the time that French explorers set up a trading post on the nearby shores of Lake Ontario.

The tree now finds itself in the back yard of a nondescript bungalow on a winding street in the heart of a residential North York neighborhood.

Its huge trunk has a circumference of five meters and brushes up against the back of the 1960s house.

In summer, its long leafy branches shade the entire lot from the sun’s rays.

But in recent years, a new homeowner expressed concerns about being able to afford proper tree maintenance and its roots cracking the house’s foundation.

Neighbors also worry that this awesome specimen may one day be damaged by strong winds or felled in a storm.

To protect it and make it accessible to everyone in this city of 6 million people, Toronto’s city council voted in 2018 to buy the property, raze the house and turn the land into a small public park.

Takes your breath away

A deal was reached with the homeowner last year to sell the property to the city.

That outcome delighted Edith George, a local resident who lobbied over 14 years to preserve the oak tree, whose beauty she says “just takes your breath away”.

“It’s the Rolls-Royce of heritage trees. No other tree in Canada has the heritage value that this tree has,” the 68-year-old retiree told AFP.

Experts say that with care and under the right conditions, the tree…