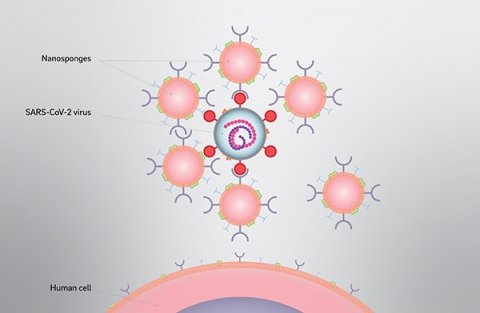 Nanoparticles cloaked in human lung cell membranes and human immune cell membranes can attract and neutralize the SARS-CoV-2 virus in cell culture, causing the virus to lose its ability to hijack host cells and reproduce.

The first data describing this new direction for fighting COVID-19 were published on June 17 in the journal Nano Letters. The “nanosponges” were developed by engineers at the University of California San Diego and tested by researchers at Boston University.

The UC San Diego researchers call their nano-scale particles “nanosponges” because they soak up harmful pathogens and toxins.

In lab experiments, both the lung cell and immune cell types of nanosponges caused the SARS-CoV-2 virus to lose nearly 90% of its “viral infectivity” in a dose-dependent manner. Viral infectivity is a measure of the ability of the virus to enter the host cell and exploit its resources to replicate and produce additional infectious viral particles.

Instead of targeting the virus itself, these nanosponges are designed to protect the healthy cells the virus invades.

“Traditionally, drug developers for infectious diseases dive deep on the details of the pathogen in order to find druggable targets. Our approach is different. We only need to know what the target cells are. And then we aim to protect the targets by creating biomimetic decoys,” said Liangfang Zhang, a nanoengineering professor at the UC San Diego Jacobs School of Engineering.