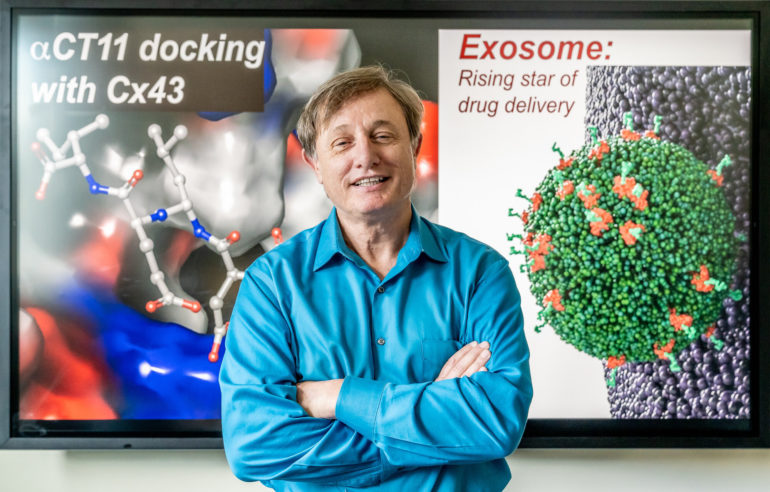 Imagine there were a drug that you could take soon after a heart attack that could reduce damage by protecting healthy heart muscle tissue.

“Cardiologists say that when a heart attack occurs, time is muscle,” said Robert Gourdie, director of the Fralin Biomedical Research Institute at VTC Center for Heart and Reparative Medicine Research.

Without oxygen supplied by blood flow, heart cells die — fast. But while a heart attack may only reduce blood and oxygen to an isolated section of heart cells — causing what’s called hypoxic ischemic injury — those dying cells send signals to their neighbors.

“The problem is that the area of dying tissue is not quarantined. Damaged heart cells start to send out signals to otherwise healthy cells, and the injury becomes much bigger,” said Gourdie, who is also the Commonwealth Research Commercialization Fund Eminent Scholar in Heart Regenerative Medicine Research and a professor in the Department of Biomedical Engineering and Mechanics in the Virginia Tech College of Engineering.

Scientists sometimes call this spread of injury signals to nearby healthy tissues a “bystander effect.”

But what if there were a way to keep the injury localized to the group of cells that are directly affected by the hypoxic ischemic injury, while allowing the nearby heart muscle cells to remain intact?

A study published today (Monday, Aug. 19) in the Journal of the American Heart Association reveals that a new molecule developed by a team of researchers led by Gourdie could help preserve heart tissue during — and even after — a heart attack.

Nearly a decade ago Gourdie, in collaboration with a postdoctoral fellow in his lab, Gautam Ghatnekar,…