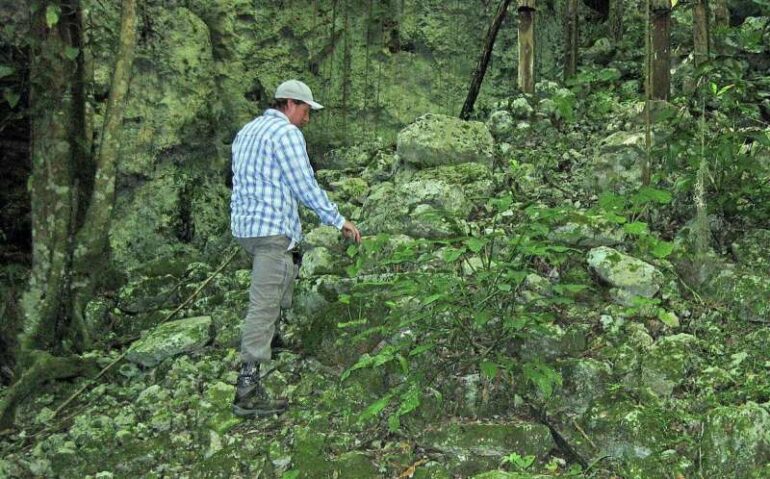 As much as modern society worships chocolate, cacao—the plant chocolate comes from—it was believed to be even more divine to ancient Mayas. The Maya considered cacao beans to be a gift from the gods and even used them as currency because of their value.

As such, cacao bean production was carefully controlled by the Maya leaders of northern Yucatan, with cacao trees only grown in sacred groves. But no modern researcher has ever been able to pinpoint where these ancient sacred groves were located—until now.

Researchers at Brigham Young University, including professor emeritus Richard Terry and graduate students Bryce Brown and Christopher Balzotti, worked closely with archaeologists from the U.S. and Mexico to identify locations the Maya used to provide the perfect blend of humidity, calm and shade required by cacao trees. While the drier climate of the Yucatan peninsula is inhospitable to cacao growth, the team realized the vast array of sinkholes common to the peninsula have microclimates with just the right conditions.

As detailed in a study newly published in the Journal of Archaeological Science Reports, the team conducted soil analyses on 11 of those sinkholes and found that the soil of nine of them contained evidence of theobromine and caffeine—combined biomarkers unique to cacao. Archaeologists also found evidence of ancient ceremonial rituals—such as staircase ramps for processions, stone carvings, altars and offerings like jade and ceramics (including tiny ceramic cacao pods)—in several sinkholes.

“We looked for theobromine for several years and found cacao in some places we didn’t expect,” said Terry, who recently retired from BYU. “We were also amazed to see the ceremonial artifacts. My students rappelled into one of these sinkholes and said, ‘Wow! There is a structure in here!’ It was a staircase that filled one-third of the sinkhole with stone.”

To extract and analyze the sinkhole soil for cacao biomarkers—specifically theobromine and caffeine—the team developed a new method of soil extraction. This involved drying the soil samples and passing them through a sieve, covering them with hot water, having them centrifuged and passed through extraction disks, and analyzing the extracts by mass spectrometry. To increase the sensitivity of their testing, the research team compared the results of the soil samples to seven control samples with no history of exposure to the biomarkers.

The findings of the BYU study indicate that cacao groves played an important role in ancient rituals and trade routes of the ancient Maya, impacting the entirety of the Mesoamerican economy. A 70-mile Maya “highway” in the area that was the main artery for trade passes near hundreds of sinkholes, so it is likely that the leaders who commissioned the highway development also controlled cacao production. The evidence of cacao cultivation alongside archaeological findings also supports the idea that cacao was important in the ideological move from a maize god to a sun god.

In one sinkhole near Coba, Mexico, a village 45 minutes from modern day Tulum, the research team found the arm and bracelet of a figurine attached to an incense jar and several ceramic modeled cacao pods. They also found remnant cacao trees growing there, making it quite possible that this sinkhole, named “Dzadz Ion,” was the location of a sacred cacao grove during the Late Postclassic period (About A.D. 1000 to 1400).

“Now we have these links between religious structures and the religious crops grown in these sinkholes,” Terry said. “Knowing that the cacao beans were used as currency, it means the sinkholes were a place where the money could be grown and controlled. This new understanding creates a rich historical narrative of a highly charged Maya landscape with economic, political and spiritual value.”