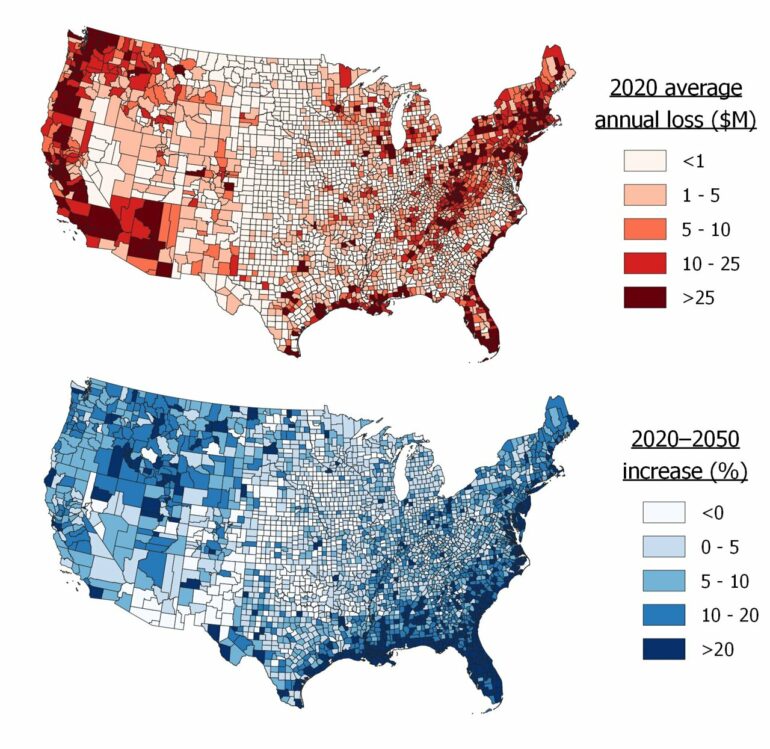 Climate change could result in the financial toll of flooding rising by more than a quarter in the United States by 2050—and disadvantaged communities will bear the biggest brunt, according to new research.

The University of Bristol-led study, published today in Nature Climate Change, deployed advanced modeling techniques to make the colossal calculations, which forecasted average annual flood losses would increase by 26.4% from US$32 billion currently to US$40.6 billion in less than 30 years.

By analyzing nation-wide property asset data and detailed flood projections, the team of leading international flood risk scientists developed for the first time a comprehensive, high-resolution assessment of flood risk in the US. The estimates of financial loss, which include damage to homes, businesses and their contents, were based on 2021 dollar values so the actual numbers would likely be much bigger factoring in inflation.

While the research reveals poorer communities with a proportionally larger white population face the most danger at present, future growth in flood risk will have a greater impact on African American communities on the Atlantic and Gulf coasts.

Predicted population change was also shown to have a have a huge effect on flood risk, resulting in four-fold increases compared to the impact of climate change alone and sending costs further spiraling.

“Typical risk models rely on historical data which doesn’t capture projected climate change or offer sufficient detail. Our sophisticated techniques using state-of-the-science flood models give a much more accurate picture of future flooding and how populations will be affected.

“The mapping clearly indicates Black communities will be disproportionately affected in a warming world, in addition to the poorer White communities which predominantly bear the historical risk. Both of these findings are of significant concern. The research is a call to action for adaptation and mitigation work to be stepped up to reduce the devastating financial impact flooding wreaks on people’s lives.”

The research was carried out in partnership with experts from universities in New York, California, and Philadelphia.

Co-author Professor Paul Bates CBE FRS, Professor of Hydrology at the university’s Cabot Institute for the Environment and School of Geographical Sciences, said: “Current flood risk in western society is already unacceptably high, yet climate and population change threaten to inflate these losses significantly. The relatively short timescales over which this increase will take place mean we cannot rely on decarbonisation to reduce the risk so we have to adapt better, both to the situation now and for the future.”