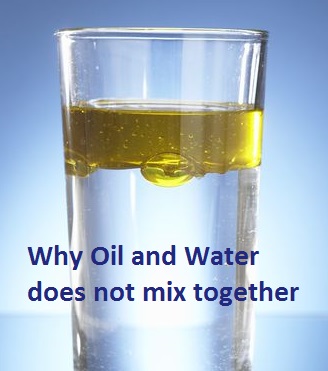 Common experience tells us that oil and water do not mix. Yet, it turns out that they can mix when oil is dispersed as small droplets in water. This strange behavior has long vexed scientists because there is no explanation for it. A team of EPFL and ICTP scientists have studied this question using novel optical technology and discovered the mechanism by which these two neutral and immiscible compounds can in fact mix together and form emulsions. The answer lies in the electrical charge distribution at the interface.

For more than hundred years, chemists have wondered about this question: How can tiny oil droplets exist in water without any stabilizing molecules? “After all, water molecules have such strong and favored interactions with one another that they do not like to incorporate molecules that do not participate in these interactions,” says Prof. Sylvie Roke, the lead investigator of the study.

Indeed, oil and water segregate from one another when simply mixed. However, with sufficient input of energy in the form of ultrasound, droplets of oil with sizes less than 1 micron form in pure water and continue to exist for several weeks or months. Curiously when placed in an electric field, the droplets move towards the positive electrode. Thus, mixing neutral oil and neutral water results in negatively charged oil droplets. Unsurprisingly, the source of this unexpected charge has been heavily debated.

The team of scientists from the Laboratory of fundamental BioPhotonics (LBP) in the school of engineering at EPFL led by prof. Roke, in collaboration with Dr. Ali Hassanali from the International Center of Theoretical Physics (ICTP), Trieste found the source of the negative charge by studying both the charge as well as the molecular structure of the droplets interfacial oil and water. Their results have been published in Science.

It turns out that the answer to this longstanding puzzle lies at the interface between oil droplets and water. Water molecules prefer to donate and accept electrical charges from their neighbors via an interaction known as hydrogen bonding. However, when they are close to the oil molecules at the droplet surface, they can no longer find enough water neighbors to hydrogen bond with. Instead, these water molecules donate their imbalanced electrical charges to the oil molecules at the droplet surface. This study reveals that the water-oil interaction occurs via a so-called improper hydrogen bond. This is a weak hydrogen bond between oil and water, and although weak—many of these will stabilize the droplet.

To unravel this mechanism, Roke’s team used an ultrafast optical technique. “Two ultrashort laser pulses were overlapped on a mixture of oil droplets and water. When we do this, new photons are generated and scattered from the droplet interface. These photons have the sum frequency of the two incoming laser beams and report on the vibrational bonds at the interface, that is, the motion of atoms within interfacial molecules. This tells us about the structure and the interactions between oil and water,” explains Roke. On the molecular scale, the interface between oil droplets and water has strong similarities with interfaces involved in protein folding or biological membrane formation. Therefore, these findings about the structure of oil droplet/water interface not only satisfy our curiosity about the intricate complexities of water but also have implications for understanding interactions throughout biology and chemistry.