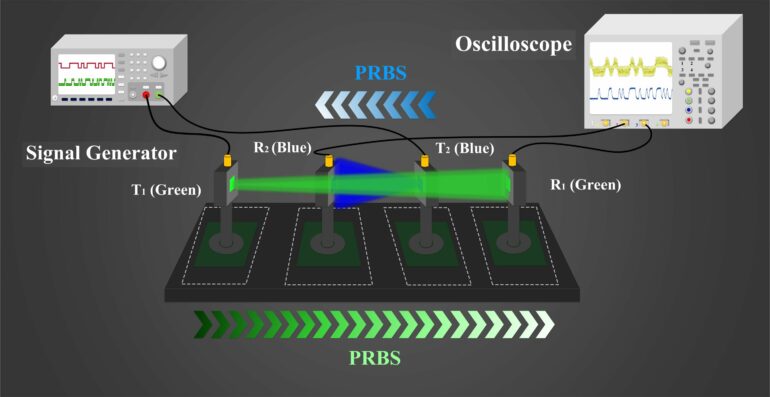 The researchers describe their new approach in the journal Optics Letters. It is based on devices called multiple quantum well (MQW) III-nitride diodes that can emit and detect light at the same time.

“This technique could enable light-based communication functions to be highly integrated onto a chip, which could also be used to reduce the size of circuit boards, making them cheaper and more portable,” said Wang. “Eventually we would like to develop a photonic CPU based on this communication mode.”

MQW III-nitride diodes are chip-based devices that feature an overlapping region between the wavelengths they emit and detect. This allows them to be simultaneously used as both a transmitter and a receiver in a wireless light-based communication system. These diodes also feature a variety of light emission, transmission, modulation and detection functions that make them useful for this application.

In the new work, the researchers used blue and green emitting MQW III-nitride diodes to create a single-link communication system that can transmit and receive information on more than one channel. This required figuring out how to stop crosstalk from occurring between the different optical signals.

They accomplished this by designing a setup with two blue emitting MQW III-nitride diodes placed between two green diodes in a single optical path. Each diode chip was coated with a distributed Bragg reflection (DBR) coating that blocked blue light while letting the green light through. This created a green optical path with one green diode acting as a transmitter and one as a receiver while the blue light stayed between the blue diode transmitter/receiver pair.

To test the system, the researchers carried out various types of optical characterizations. For example, they showed that when the blue diode functioned as a transmitter, light emission increased as the injection current increased from 10 mA to 30 mA, converting the energy and information from the electrical into the optical domain. They also demonstrated that the emission and detection spectrums of the blue light chip overlapped by about 37 nm, confirming simultaneous emission and detection. Overall, these tests confirmed that a single-optical path full-duplex optical communication link could be stably formed using two pairs of MQW III-nitride diodes, delivering a data rate of 100 bits per second.

The researchers are now working to better understand the simultaneous emission and detection properties of MQW III-nitride diodes to make optoelectronic chips that are even more integrated and multifunctional. They are also working to improve the detection capabilities of the new communication system.