Beyond sound: Red-eyed treefrogs use sound and vibration in calls for mates and aggression 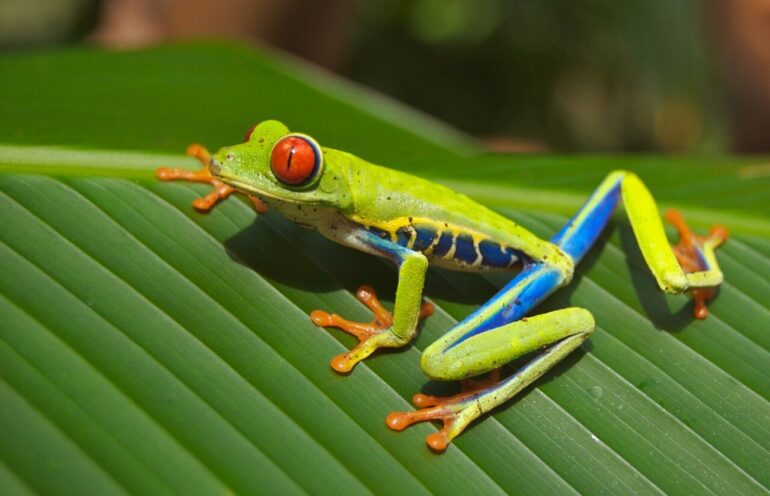 One would be hard-pressed to take a walk outside without hearing the sounds of calling animals. During the day, birds chatter back and forth, and as night falls, frogs and insects call to defend territories and to attract potential mates. For several decades, biologists have studied these calls with great interest, taking away major lessons about the evolution of animal displays and the processes of speciation. But there may be a lot more to animal calls than we have realized.

A new study appearing in the Journal of Experimental Biology by Dr. Michael Caldwell and student researchers at Gettysburg College demonstrates that the calls of red-eyed treefrogs don’t just send sounds through the air, but also send vibrations through the plants. What’s more, these plant vibrations change the message that other frogs receive in major ways. The researchers played sound and vibrations produced by calling males to other red-eyed treefrogs surrounding a rainforest pond in Panama. They found that female frogs are over twice as likely to choose the calls of a potential mate if those calls include both sound and vibrations, and male frogs are far more aggressive and show a greater range of aggressive displays when they can feel the vibrations generated by the calls of their rivals.

“This really changes how we look at things,” says Caldwell. “If we want to know how a call functions, we can’t just look at the sound it makes anymore. We need to at least consider the roles that its associated vibrations play in getting the message across.”

Because vibrations are unavoidably excited in any surface a calling animal is touching, the authors of the new study suggest it is likely that many more species communicate using similar “bimodal acoustic calls” that function simultaneously through both airborne sound and plant-, ground-, or water-borne vibrations.

“There is zero reason to suspect that bimodal acoustic calls are limited to red-eyed treefrogs. In fact, we know they aren’t,” says Caldwell, who points out that researchers at UCLA and the University of Texas are reporting similar results with distantly related frog species, and that elephants and several species of insect have been shown to communicate this way. “For decades,” says Caldwell, “we just didn’t know what to look for, but with a growing scientific interest in vibrational communication, all of that is rapidly changing.”

This new focus on animal calls as functioning through both sound and vibration could set the stage for major advances in the study of signal evolution. One potential implication highlighted by the team at Gettysburg College is that “we may even learn new things about sound signals we thought we understood.” This is because both the sound and the vibrational components of bimodal acoustic signals are generated together by the same organs. So, selection acting either call component will also necessarily shape the evolution of the other.

The red-eyed treefrog is one of the most photographed species on the planet, which makes these findings all the more unexpected. “It just goes to show, we still have a lot to learn about animal behavior,” reports Dr. Caldwell. “We hear animal calls so often that we tune most of them out, but when we make a point to look at the world from the perspective of a frog, species that are far more sensitive to vibrations than humans, it quickly becomes clear that we have been overlooking a major part of what they are saying to one another.”

The meat, the muscle, and the motion of cell fusion


Citation:
Beyond sound: Red-eyed treefrogs use sound and vibration in calls for mates and aggression (2022, September 14)