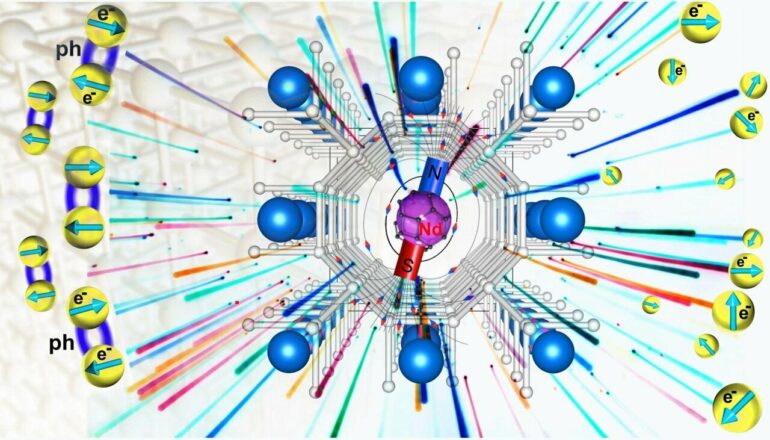 In a series of experiments on lanthanum superhydride with impurities, researchers from Skoltech, Lebedev Physical Institute of RAS and their colleagues from the United States, Germany and Japan, have established the mechanism behind the highest-temperature superconductivity in polyhydrides observed to date. Reported in Advanced Materials, the discovery paves the way for future studies pursuing materials that conduct electricity with zero resistance at or close to room temperature. Those would come in handy for superconducting electronics and quantum computers, maglev trains, MRI machines, particle accelerators, and perhaps even nuclear fission reactors and lossless power lines, if you’re into that kind of thing.

If not the Holy Grail of materials science, near room-temperature superconductors are certainly among the most sought-after materials with technological applications. If discovered, such a material would enable monster electromagnets that could be used in fundamental research instruments, such as ultraprecise magnetic sensors and particle accelerators that would make the Large Hadron Collider seem puny, as well as in medical tech (better MRI scanners), magnetic levitation trains, miniature motors and generators, and extended battery life gadgets. Among the more futuristic applications are long-distance power transmission lines that would deliver electricity nearly without losses.

Theoretically, pure hydrogen should be the best high-temperature superconductor, provided you could squeeze it hard enough to turn it into a metal. But that’s quite a challenge, to say the least. So instead, scientists are exploring compounds that contain additional elements, besides lots of hydrogen. That way they are sacrificing some of the temperature to bring the pressures needed to stabilize the superconducting material down and into the realm of what’s technologically possible.

“Right now, lanthanum superhydride LaH10 is the top contender in this superconductor race, with a critical temperature of minus 23 degrees Celsius,” the study’s principal investigator, Skoltech Professor Artem R. Oganov, commented. “This is very impressive, but to go even higher, we first had to understand how superconductivity in this material works. Now we do.”

There are multiple mechanisms that can enable electrical conductivity with zero resistance. The one best-understood is called conventional phonon-mediated superconductivity. It arises by virtue of electron interactions with crystal lattice oscillations. The well-established theory of conventional superconductivity can be used to improve on lanthanum superhydride, perhaps by introducing some crucial third element to create a novel compound of hydrogen and two other well-chosen elements.

“The problem was, up until now, no model of ternary superconducting systems existed to find out how much we can improve the superconducting properties of polyhydrides.. So there was a fair amount of uncertainty hindering and obscuring the progress in the quest for near room-temperature superconductivity. We have cleared the way by eliminating this uncertainty,” Oganov said.

“Having confirmed in a prior paper that the addition of yttrium, which is nonmagnetic, does not affect the critical temperature of superconductivity in LaH10, we doped this material with the magnetic neodymium instead. And sure enough, the more neodymium atoms were added, the more this suppressed superconductivity, ultimately destroying it at about 15 to 20 atomic percent content of Nd,” said Dmitrii Semenok, a Ph.D. student at Skoltech and lead author of the study.

According to the researchers, now we have a better understanding of how impurities will affect superconductivity in hydrides and can predict the properties of many such ternary hydride systems. The team will rely on the established conclusions to predict, synthesize, and test new three-element hydrogen-rich compounds, hopefully improving on lanthanum superhydride by bringing its critical temperature up, pressure of synthesis down, or both.

Research into anomalous hydride compounds has done a lot to further our understanding of and dispel misconceptions about superconductivity. Much of this research has made use of USPEX, a computer program developed by Oganov to predict the largely counterintuitive compounds that exist at very high pressures.