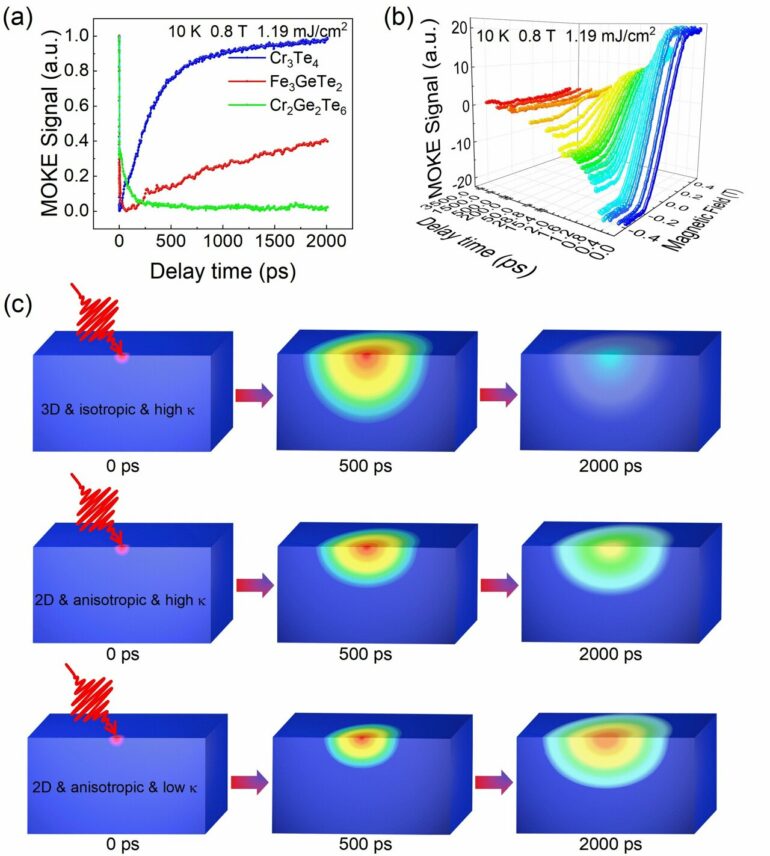 All magnets—from the simple souvenirs hanging on your refrigerator to the disks that give your computer memory to the powerful versions used in research labs—contain spinning quasiparticles called magnons. The direction one magnon spins can influence that of its neighbor, which affects the spin of its neighbor, and so on, yielding what are known as spin waves. Information can potentially be transmitted via spin waves more efficiently than with electricity, and magnons can serve as “quantum interconnects” that “glue” quantum bits together into powerful computers.

Magnons have enormous potential, but they are often difficult to detect without bulky pieces of lab equipment. Such setups are fine for conducting experiments, but not for developing devices, said Columbia researcher Xiaoyang Zhu, such as magnonic devices and so-called spintronics. Seeing magnons can be made much simpler, however, with the right material: a magnetic semiconductor called chromium sulfide bromide (CrSBr) that can be peeled into atom-thin, 2D layers, synthesized in Department of Chemistry professor Xavier Roy’s lab.

In a new article in Nature, Zhu and collaborators at Columbia, the University of Washington, New York University, and Oak Ridge National Laboratory show that magnons in CrSBr can pair up with another quasiparticle called an exciton, which emits light, offering the researchers a means to “see” the spinning quasiparticle.

As they perturbed the magnons with light, they observed oscillations from the excitons in the near-infrared range, which is nearly visible to the naked eye. “For the first time, we can see magnons with a simple optical effect,” Zhu said.

The results may be viewed as quantum transduction, or the conversion of one “quanta” of energy to another, said first author Youn Jun (Eunice) Bae, a postdoc in Zhu’s lab. The energy of excitons is four orders of magnitude larger than that of magnons; now, because they pair together so strongly, we can easily observe tiny changes in the magnons, Bae explained. This transduction may one day enable researchers to build quantum information networks that can take information from spin-based quantum bits—which generally need to be located within millimeters of each other—and convert it to light, a form of energy that can transfer information up to hundreds of miles via optical fibers

The coherence time—how long the oscillations can last—was also remarkable, Zhu said, lasting much longer than the five-nanosecond limit of the experiment. The phenomenon could travel over seven micrometers and persist even when the CrSBr devices were made of just two atom-thin layers, raising the possibility of building nanoscale spintronic devices. These devices could one day be more efficient alternatives to today’s electronics. Unlike electrons in an electrical current that encounter resistance as they travel, no particles are actually moving in a spin wave.

From here, the researchers plan to explore CrSBr’s quantum information potential, as well as other material candidates. “In the MRSEC and EFRC, we are exploring the quantum properties of several 2D materials that you can stack like papers to create all kinds of new physical phenomena,” Zhu said.

For example, if magnon-exciton coupling can be found in other kinds of magnetic semiconductors with slightly different properties than CrSBr, they might emit light in a wider range of colors.